By Lin Ting and Wen Simin 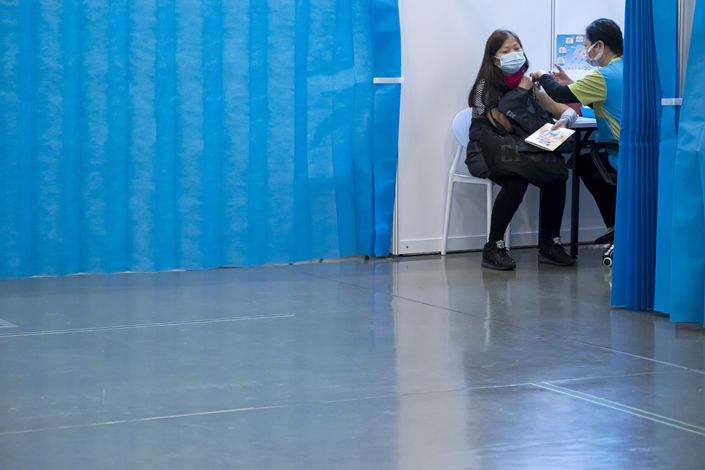 A woman receives Sinovac’s Covid-19 vaccine at a community vaccination center in Hong Kong on Feb. 23. Photo: The Paper

Hong Kong health authorities have ruled out Sinovac Covid-19 inoculation links with three of four serious health cases that resulted in the deaths of a woman, 55, and man, 73, in the past week.

An expert committee said there were abnormal health conditions detected in three of the patients, two of whom were admitted to intensive care, but the cause of man’s death is pending the results of an autopsy.

The Sinovac vaccination-related assessments were done after the sudden death on March 3 of a Hong Kong man whose passing was determined to be highly unlikely to be linked to the Sinovac vaccine he received two days earlier.

The Hong Kong Department of Health reported that, as of Feb. 28, 44 million doses of Sinovac’s Covid-19 vaccine had been administered worldwide. Of 56 deaths after vaccination reported to Sinovac Biotech Ltd., all were assessed to be unrelated to the vaccination. The deceased were aged between 26 and 103.

The first of the four recent Hong Kong cases involved a 55-year-old woman suffering from hypertension, hyperlipidemia and other long-term diseases, the department said. She received the Sinovac vaccine on March 2, was hospitalized for an acute stroke on Friday, and died early Saturday morning. Preliminary results of the autopsy show her stroke was due to an aortic tear unrelated to the vaccination.

The second case involved an 80-year-old man who suffers from diabetes, carotid atherosclerosis, and hypertension and had previously suffered a stroke. He was vaccinated on March 1 and was admitted to a public hospital emergency department with chest pains on Saturday.

The third was a 72-year-old woman who suffers from diabetes, hyperlipidemia, hypertension and thyroid insufficiency. She was vaccinated on March 6, then felt weak and missed taking two doses of insulin. Following a deterioration in health on March 7, her family took her to the hospital where she was found to have severe diabetic ketoacidosis. She was transferred to the ICU for further treatment. Experts judged that her hyperglycemic hyperosmolar state was mainly related to her failure to take insulin on time.

The fourth case involved a 73-year-old man who received the Covid-19 vaccine from a private doctor on Wednesday and died on Monday morning. His medical records showed that he did not have any long-term illness. The case has been referred to the coroner, and experts will determine the relationship between cause of death and the vaccine after the preliminary autopsy report is received.

The priority vaccination population in Hong Kong includes elderly people over age 60. As of March 7, 64% of the 98,000 doses of vaccine administered were to people in that age range.

The Department of Health has set up an online reporting system for health care professionals and pharmacists to report abnormal vaccination events. It has also collaborated with the University of Hong Kong in proactive surveillance of variations in the conditions of sufferers of certain rare diseases after mass vaccination.