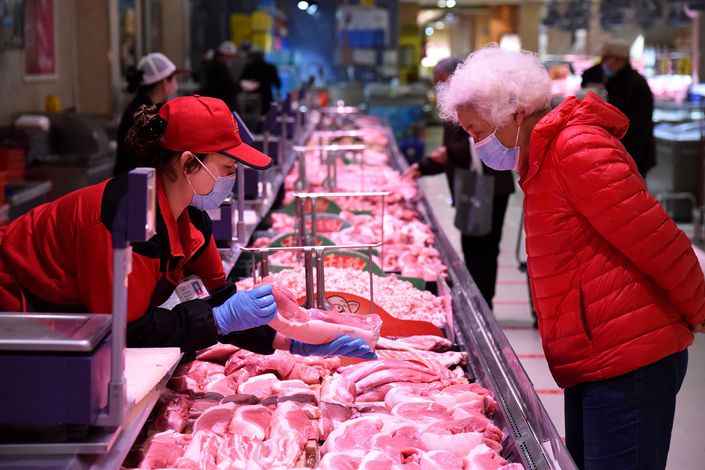 A customer examines the meat on offer Wednesday at a supermarket in Handan, Central China’s Hebei province. Photo: VCG

The producer price index (PPI), which gauges changes in the prices of goods circulated among manufacturers and mining companies, rose 1.7% (link in Chinese) year-on-year last month, accelerating from 0.3% growth in January, according to the National Bureau of Statistics (NBS). The figure marks the highest since November 2018 and exceeds the median estimate of a 1.5% rise (link in Chinese) by a Caixin survey of economists.

China, the world’s second-largest economy, is heavily dependent on imports of commodities including crude oil and minerals. On a monthly basis, the PPI rose 0.8% in February. The prices of products from the oil and natural gas extraction industry rose 7.5% month-on-month. Fueled by rising global crude oil prices, petroleum product prices in the domestic market continued to climb, Dong Lijuan, a senior NBS statistician, said in a statement (link in Chinese).

In addition, growing domestic demand and the continued increase in global metal prices have pushed up inflation in the metals mining and processing industries, Dong said.

China’s consumer price index (CPI), which measures changes in the prices of a basket of consumer goods and services, fell 0.2% (link in Chinese) year-on-year in February, following a 0.3% drop the previous month, according to the NBS. The reading came roughly in line with the median estimate of economists surveyed by Caixin.

Food prices fell 0.2% year-on-year in February, compared with a 1.6% increase in the previous month. Pork prices, which were a primary contributor to China’s consumer inflation last year, fell 14.9% last month from a year earlier, steeper than January’s 3.9% drop.

The core CPI — which excludes more-volatile food and energy prices and may better reflect long-term inflation trends — was unchanged from a year ago.

Economists at Nomura International (Hong Kong) Ltd. forecast that China’s CPI and PPI would rise 0.9% and 3% year-on-year in March, respectively, on a lower base and a rapid rise in energy and commodity prices.

The economists said they had recently raised their forecast for China’s annual PPI inflation to 4.2% from 2.7% because of the estimated increase in global commodity prices and inflation, which is due to ongoing quantitative easing, extremely low interest rates and the massive fiscal stimulus measures getting rolled out by major developed economies.

Higher PPI inflation could also have pass-through effects and push up consumer inflation, they said.

The Chinese government expects the CPI to rise about 3% this year, higher than last year’s actual growth of 2.5%, according to the annual government work report released Friday.