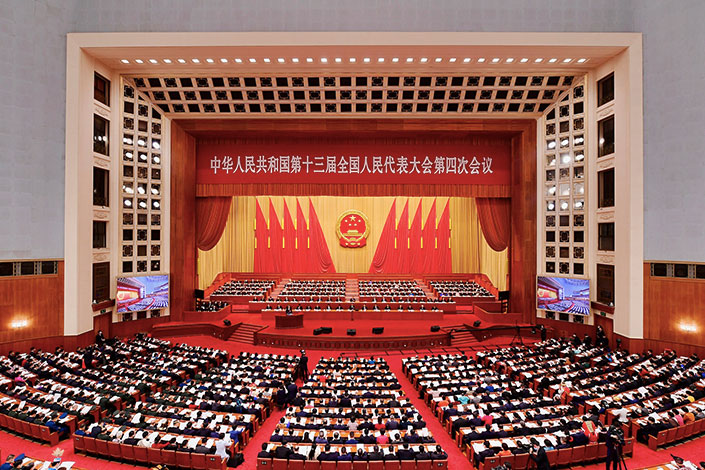 China has set a target for annual economic growth above 6% for 2021 as the country continues its economic recovery from the Covid-19 pandemic, Premier Li Keqiang announced on Friday at the start of the annual meeting of the National People’s Congress (NPC) in Beijing.

The goal that Li announced in the government work report to the NPC, China’s top legislature, is below market estimates for full-year GDP growth ranging from 8% to 10%, and reiterates top leaders’ emphasis on quality growth over quick growth.

Last year, China abandoned its decades-old practice of setting an annual GDP growth target, as the impact of the Covid-19 added uncertainty to its expansion rate. China’s GDP grew 2.3% in 2020, the lowest since 1976. Still, the country was the only major economy to expand amid the fallout of the pandemic.

“In setting this target, we have taken into account the recovery of economic activity,” Li said in the report, adding that the target will help promote reform, innovation, and high-quality development.

There is no doubt China will achieve the goal of “6% or above” with room to spare, which allows the government to deal with problems that are detrimental to long-term stability, according to Zhang Zhiwei, chief economist at Pinpoint Asset Management Ltd. The problems include “the increase in macro leverage, the over-expansion of the real estate industry, the monopoly of big tech, and the ‘disorderly expansion of capital,’” he wrote in a note.

This year’s open-ended growth target implies that Beijing is keen to avoid making a big cut to next year’s target, while keeping this year’s target in line with those set by local governments suffering especially hard from the pandemic, economists with Nomura International (Hong Kong) Ltd. said in a Friday note.

They added that the target “has few implications on the policy stance and surely does not suggest a sharp tightening.”

While moving toward an exit from the stimulus policies implemented to take the edge off the pandemic’s fallout, the central government has pledged to avoid “sharp” turns in policy and keep major economic indicators within an appropriate range. This echoes China’s top policymakers’ vow in December to maintain continuity in macroeconomic policies this year.

“We should make adjustments and improvements based on new developments to reinforce the fundamentals of the economy,” Li said in the government work report.

The government has narrowed its estimated deficit-to-GDP ratio for the year to around 3.2% from “more than 3.6%” in 2020, but it still exceeds the 3% threshold that has long been seen by policymakers as a line that must not be crossed.

Both this estimate and the quota for local government special-purpose bonds were set higher than the market expected, some economists said. The effects of the pandemic have not fully subsided, so the withdrawal of such stimulus policies should not come too early or be too fast, Li Qilin, chief economist of Hongta Securities Co. Ltd., wrote (link in Chinese) on Friday. There remain structural imbalances amid the economic recovery. For example, some small businesses are under greater pressure amid a slowdown in offline services and consumption, he wrote.

To help virus-hit small businesses weather the economic slowdown, the government said it will continue promoting tax reductions, but didn’t give a specific amount that taxes would be cut by. Such reductions include raising the value-added tax threshold for certain taxpayers by 50%, and in addition to preferential policies already in force, halving income tax payments by micro and small businesses and the self-employed on annual taxable income below 1 million yuan ($154,133).

China also aims to keep a surveyed urban unemployment rate of around 5.5% and create over 11 million new jobs in urban areas, compared to the projections of “around 6%” and “over 9 million” for last year. The lower unemployment rate estimate and higher target for new jobs indicate expected improvements in the labor market in 2021.

The government set the growth target for the consumer price index, which measures changes in the prices of a select basket of consumer goods and services, around 3%, leaving Beijing with space to gradually and moderately normalize policy this year, the Nomura economists wrote.

Read the full text of the government work report.