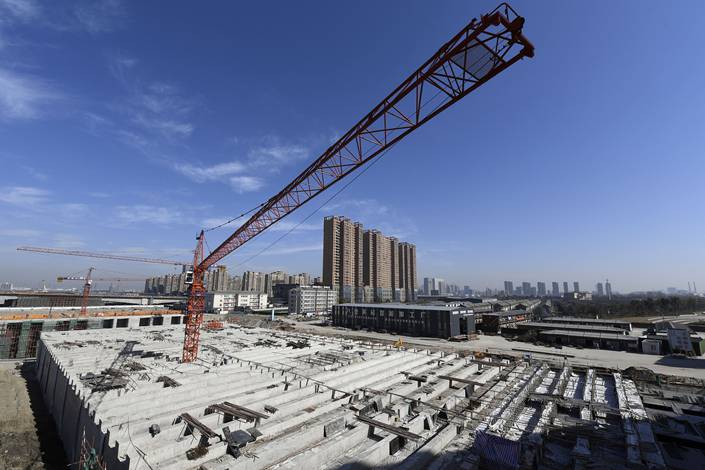 China’s GDP grew 2.3% in 2020 as the world’s second-largest economy managed a steady recovery from the fallout of its Covid-19 outbreak a year ago, official data (link in Chinese) showed Monday.

The annual growth rate was the lowest since 1976, when the sweeping Cultural Revolution wrecked the economy, but still beat the International Monetary Fund’s (IMF) projection for a 1.9% increase. The organization expected China to be the only major economy to expand in 2020.

China’s full-year GDP came in at 101.6 trillion yuan ($15.7 trillion), the first time it surpassed 100 trillion yuan, according to the National Bureau of Statistics (NBS).

Authorities and economists generally agree that the quick resumption of economic activity after the domestic outbreak came under control in the second quarter, coupled with monetary and fiscal stimulus measures, were the major reasons behind China’s recovery.

“Our country was early in containing the outbreak, early in resuming work and production, and early in achieving economic growth,” NBS head Ning Jizhe said at a Monday briefing (link in Chinese).

The economic gap between China and the U.S. is becoming smaller, said Feng Xuming, a researcher at state-backed think tank the Chinese Academy of Social Sciences. Based on the latest IMF projection for the U.S.’ GDP, China’s economy as a percentage of the U.S.’ was likely to have increased to 70.8% in 2020 from 66.7% the previous year, he told Caixin.

China’s fourth-quarter GDP grew 6.5% year-on-year, accelerating from 4.9% growth in the previous quarter and gaining momentum in the wake of its record 6.8% contraction in the first quarter. The reading beat the median estimate of 6.1% (link in Chinese) in a Caixin survey of economists.

The better-than-expected quarterly growth was partly driven by faster industrial production growth, which was in turn bolstered primarily by a rapid expansion in exports, economists at Nomura International (Hong Kong) Ltd. said in a research note.

Value-added industrial output — which measures production by factories, mines and utilities — grew 7.3% year-on-year (link in Chinese) in the month of December, up from a 7% increase the previous month and beating the median forecast in the Caixin survey for 6.9% growth.

Consumption growth was worse than expected as retail sales rose 4.6% year-on-year (link in Chinese) in December, losing a step after increasing 5% in the previous month. The reading came in below the median forecast for a 5.5% increase in the Caixin survey.

Ning attributed the slower consumption recovery to scattered flare-ups of Covid-19 in some regions.

Also on the demand side, fixed-asset investment, a key driver of domestic demand, grew 2.9% (link in Chinese) last year, accelerating from a 2.6% year-on-year rise in the first 11 months, according to NBS data. The rate was lower than the median forecast of 3.1% growth in the Caixin survey.

Investment in real estate development rose 7% (link in Chinese) in 2020, picking up a step from a 6.8% rise in the January-to-November period.

Multiple economists forecast faster economic growth for 2021, especially in the first quarter given the low base in the same period last year. The IMF projected an 8.2% rise in China’s GDP this year.

Still, some economists warned about risks. Rising energy and raw material prices, financial risks and fiscal pressure on some local governments, as well as pressure on exporters from a probable slowdown in export growth all pose challenges to China’s economy in 2021, Feng said in a Monday note (link in Chinese).

“The slowdown in income growth among low- and middle-income groups and the decline in their willingness to spend money will continue to hinder the recovery in consumption,” he said.

As China’s policymakers have vowed continuity and stability in macro policies for 2021, some analysts have estimated a modest and flexible exit from stimulus policies amid uncertainties stemming from the global pandemic.