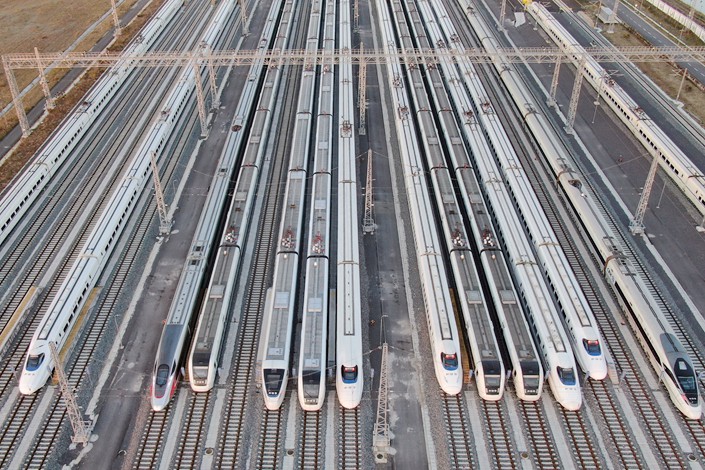 China’s authorities have no intention of over-stimulating the economy through massive infrastructure spending this year. Photo: IC Photo

Editor’s note: When 2020 started, the U.S. and China sighed with relief that the phase one trade deal had been inked, and they both hoped it would slow the decoupling of their economies. U.S. President Donald Trump was gearing up for his campaign to get four more years in the White House. No one could have guessed how history would quietly change course and how fast the coronavirus wave would engulf everyone on the planet.

The pandemic has changed everything. Global supply chains have broken apart inch by inch — airplanes have been left stranded, factories have been closed, restaurants and cinemas have shut down, and cross-border travel ground to a halt. The very foundation of modernization and globalization has been shaken. No one can escape.

The virus is still rampant. But global economies and societies are moving in different directions: some reached new heights after initial setbacks, while others are still struggling. Easy money continues to push up asset prices. The biggest migration in human history — the migration to digital space — created new winners and losers on a massive scale. The coronavirus might be the tiniest black swan in human history, and the global tech giants could be seen as the largest grey rhino in the capital market. Together the two shaped our 2020, and perhaps it will be many years before we can fathom the full impact that they have had on our lives.

Caixin has selected 10 themes to reflect on this unusual year with you, our readers. It saddened us that the light went out for so many people we cherished: the millions of Covid-19 patients who died, Kobe Bryant, Diego Maradona, and front line doctors such as Li Wenliang. But 2021 promises a new dawn.

China was the first major economy to recover from the Covid-19 pandemic in 2020. The quick recovery is largely due to the effective containment strategy for the virus and the quickly implemented stimulus measures. But the government’s stimulus has also resulted in accelerating credit growth and high levels of leverage, indicating China’s financial stability risks remain elevated.

Taking lessons from the 4 trillion yuan ($611.7 billion) stimulus package after the 2008 global financial crisis that created asset bubbles and a high macro leveraging ratio that lasted well into the next decade, China’s authorities have no intention this time of over-stimulating the economy. They are seeking to gradually normalize the previous monetary and fiscal easing measures amid the economic growth recovery.

The Chinese economy bounced back promptly after a severe downturn. China’s GDP growth for the first three quarters in 2020 came in at -6.8%, 3.2% and 4.9% respectively. Forecasts for the fourth are as high as 7%, making full-year growth of 1.5-2.5% likely.

How a “V” gets shaped

China’s counter-cyclical measures worked effectively. Decisive measures to fight off the virus were also widely seen as a prerequisite.

Some distinctive characteristics of China’s rescue and stimulus policies include:

• The package is smaller relative to GDP than those of other major economies;

• More focus was put on helping producers and companies than consumers and households;

• Fiscal policy took the “front seat” — with some 3.6 trillion yuan of extra spending.

The first feature was a result of policymakers’ “wait and see” approach. The third aimed at preventing another round of off-balance sheet, debt-driven recovery. As a result, although fix-asset investment was once again the main driver for the recovery of the Chinese economy in the earlier phases, big price spikes in the real estate sector were largely unseen.

Instead of repeating its old playbook of relying mainly on credit expansion, China has been primarily using its fiscal policy to revive its economy. Discretionary fiscal measures amounting to around 4.5% of GDP have been announced during this year’s Government Work Report.

Monetary policy measures are complementing fiscal policy by ensuring sufficient liquidity into the banking system, with most of the stimulus measures introduced in the first four months of this year, including three reserve requirement ratio (RRR) cuts, interest rate cuts and large-scale open market operations, but it has refrained from the massive stimulus of the past. Meanwhile, instead of a broad-based easing, the uneven recovery resulted from the PBOC's targeted-easing approach, with more support going to manufacturing and SMEs, and preventing the money from being used in the real estate sector and financial markets.

It seems that managing the pace of the exit is a big challenge for the PBOC, as it faces the double dilemma of balancing stable growth with risk prevention, and monetary policy normalization with the rapid appreciation of the yuan.

On one hand, regulators do not want to over-use debt to support the economy, as rising indebtedness will push China’s financial system into the abyss of systemic financial risk; on the other hand, given the U.S. Federal Reserve’s zero interest rate and quantitative easing policies, the PBOC's normalization of monetary policy will lead to a widening gap between China and U.S. interest rates, which will result in the quick appreciation of the yuan against the U.S. dollar.

To some extent, China may have made its choice. There are signs that the government is likely to reapply its deleveraging process, as China’s economy stabilizes. Some analysts believed that China’s problem does not lie at the high macro leverage level, but more in the need for structural optimization.

However, the central government is clearly worried about its increasing macro leverage ratio. After years of deleveraging and cleaning up the shadow banking system, China’s debt-to-GDP ratio underwent a decline in 2018 and a mild increase in 2019. But the ratio rose by 21 percentage points to 266.4% in the first half from the end of last year, as the country stepped up credit support to mitigate the impact of the pandemic.

The focus on helping companies was also accompanied by a unique set of features: production resumed faster than consumption; manufacturing recovered faster than services; export surged; the job market stabilized but recovered slower; and consumer inflation was mostly in check.

Moving forward, one should pay close attention to exports and consumption. Leading indicators like the Caixin PMI have already showed signs of weakening in external demand. After seven months of continuous contraction, retail sales eventually returned to growth, but not as strongly as expected. Data showed the labor market has been improving and wages have been rising. But how that outweighs a worrisome (in banking regulators’ eyes) group of “indebted youth” and job insecurity, is yet to be seen.

An eye on the road

To understand the outlook of Chinese economy, key aspects to watch for in 2021 include a stimulus exit. It’s time to consider withdrawing monetary stimulus and fine-tuning fiscal policy as the recovery strengthens. The consensus of global policymakers is that the exit should be done sooner rather than later, But for China, the picture is more complicated. The current challenge is to carefully manage the pace of the exit given high debt levels in the economy, as the quick withdrawal of liquidity could trigger a debt crisis.

The 14th Five-Year Plan, expected to be officially released in full during the “Two Sessions” meetings next spring, has been discussed in the party session late October. The new plan pledges elimination of growth targets in order to shift focus to “quality of growth.” The 13th Five-Year Plan ended this year, falling just short of its target to double the size of China’s GDP compared with 2010. The growth target was eliminated for 2020, though there is a target for job creation.

The “dual circulation” development strategy of “internal circulation” encompasses everything from increasing domestic consumption, to moving up the industrial value chain, to encouraging innovation. This is not the first time China has stressed the importance of its domestic market. Yet the trade war apparently triggered a round of “overall rethinking” on this side of the Pacific.

In addition, the signing of the Regional Comprehensive Economic Partnership and a welcoming stance toward the Comprehensive and Progressive Agreement for Trans-Pacific Partnership indicate that “external circulation” is by no means a secondary consideration if there is an opening for a stronger foothold in the global trading system.

Factor market reform, brought up at the end of March, has for the first time admitted data as one of the factors besides land, labor, capital and technology. The government believes 36% of China’s GDP came from the “digital economy” in 2019. Data is gaining more prominence.

The “new infrastructure” (NI) initiative has been hyped since April. Even by “narrow” definition, it covers as many technologies such as 5G, the industrial internet, satellites, data centers and their applications like smart city and smart grid projects, as well as the scientific and education infrastructure around them like tech parks and research and development centers.

Tech giants and infrastructure providers, investors and local governments are all eyeing the big pie. Yet some call for a more thought-out “top-down” plan to prevent rushed decisions, duplication and waste in investment. Others point out that NI is more about serving industrial sectors than consumers. The problem is, Chinese innovators are very strong on the “application” side, but weak on the “origination” side, reflecting a historical neglect in basic research.

In the longer run though, tough decisions are still needed to deal with problems such as the aging population (raising of the retirement age), labor and social security (household registration reform), redefining spending obligations between the central and local governments (fiscal reform), urbanization and housing (property tax), and of course state-owned enterprise reform and deleveraging.