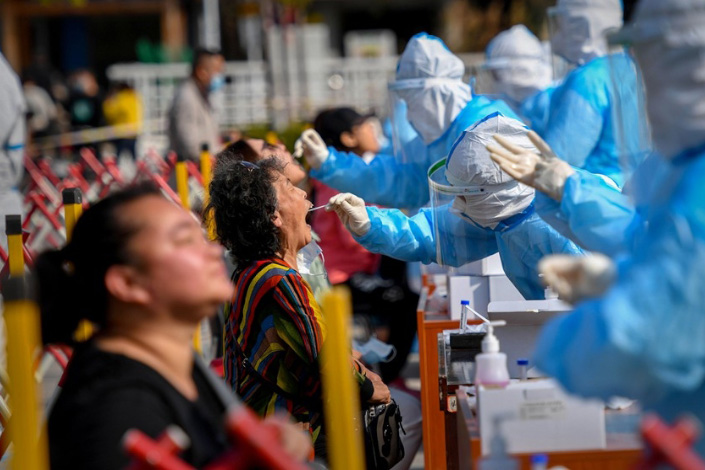 A resident takes a nucleic acid test for Covid-19 Monday at a residential community in Qingdao, East China’s Shandong province.

The year of 2020 has been dominated by Covid-19, which did tremendous damage to our work and life and is still bringing a fresh wave of lockdowns in some places. Here, we take a look back at how the pandemic defined our 2020.

At the end of 2019, a pneumonia-like case was found in Wuhan, Central China’s Hubei province, with an unknown cause, which turned out to be what is now the 2019 novel coronavirus. Days after that, Wuhan authorities reported an outbreak of pneumonia cases of unknown origin to the public on Dec. 31.

Zhong Nanshan, a prominent Chinese epidemiologist who heads the National Health Commission’s investigation into the outbreak, confirmed that the disease “definitely spreads between people” on Jan. 20.

With the confirmation of human-to-human transmission as the number of local cases rose, the Wuhan government decided to shut down the city at 10 a.m. on Jan. 23, suspending public transportation networks and asking its 11 million residents to remain in the city in an effort to halt the spread of the virus. Many cities in Hubei also resorted to lockdowns, which were followed by nationwide travel controls.

By the time the lockdown began, the city’s hospitals were overwhelmed by patients due to the high infection rate of the virus. On Jan. 23, authorities announced two makeshift hospitals would be built, a measure Beijing adopted during the SARS outbreak in 2003. Together with other public venues converted into medical facilities, more than 10,000 beds were offered to patients in early February. Meanwhile, a large number of doctors from all over the nation were sent to Wuhan to offer a helping hand.

Covid-19 spread quickly to other countries. South Korea’s coronavirus outbreak once looked grim with new cases skyrocketing on a daily basis and a massive cluster of infections, making it the worst-hit country outside China. But South Korea showed there is another way to effectively bring the disease under control without ruining businesses and locking down cities. South Korean officials attribute to the country’s effective control of the outbreak to a strategy called TRUST, for transparency, robust screening and quarantine, unique but universally applicable testing, strict control and treatment.

By contrast, the western countries’ handling of the outbreak was slow and ineffective at first. The U.S. was among the first countries to respond to outbreak in early January. But limited testing, inadequate medical gear and inconsistent quarantine and prevention measures led the country to miss its window for controlling its outbreak. In Europe, Italy suffered one of the world’s highest Covid-19 fatality rates due to its large elderly population and ineffective testing policies. The U.S., Indian, Brazil, Russia and France are currently the top five countries with the largest number of confirmed cases of Covid-19, with the deaths in the U.S. approaching 300,000.

As the pandemic spread across the world, people found that asymptomatic individuals were often the source of confirmed cases of Covid-19. Scientists warned that this large group of virus carrier could be highly infectious, a situation made worse by the fact they were probably unaware of it. China started to release statistics about its asymptomatic cases on April 1, bringing the number of new cases the next day to 130.

As countries from China to the United States move ahead with reopening their economies after months-long lockdowns, efforts to ramp up testing become even more essential. Insufficient access to testing is a lesson China learned the hard way in its failure to contain the early outbreak in Wuhan. The country has since expanded capacity by fast-tracking approval of dozens of testing kits, setting up new labs and authorizing more private institutions to take part. By May, the national drug regulator had approved 27 companies, up from only three in January, to produce 30 testing kits for the novel coronavirus, including 19 nucleic acid tests and 11 antibody tests. Their combined production capacity reached 9.02 million a day, compared with 773,000 in late January.

Demand for testing kits is rising quickly, not only from China but also abroad. Chinese companies numbering in the dozens pivoted to meet overseas demand as the coronavirus epidemic at home appeared to be waning while foreign governments scrambled get a handle on their own outbreaks. Beyond the head start in test kits, there were also questions about their accuracy and reliability, which later gradually improved amid the large amount of tested cases.

As the world watched how China bought its Covid-19 pandemic under control and allowed life to return to normal after months of lockdown, Wuhan reported six new cases a month after the lockdown ended, prompting the city to embark on the ambitious task of testing its entire population of 11 million in 10 days. Meanwhile, several northeast cities reimposed lockdowns after new infections emerged. The most prominent outbreak occurred in Shulan, Northeast China’s Jilin province, where a new lockdown went into force after a cluster of cases appeared. In late April, several clusters were discovered in Heilongjiang, which is located to the north of Jilin. Multiple hospitals were involved, including two in the provincial capital of Harbin and one in Mudanjiang, leading to at least 90 infections and several deaths.

One lesson we can learn from the resurgence is that it is crucial to trace the source of an outbreak. The first patient in an outbreak in the Northwest China’s Xinjiang Uygur autonomous region was traced to a loading dock worker infected through a contaminated truck. But, this fact wasn’t discovered until the worker had passed the coronavirus to hundreds of people.

As the northern hemisphere enters winter, the pandemic is approaching another peak because viruses survive for notably longer periods on surfaces at low temperatures. With domestic cases being brought under control, product imports remain the most important target for China’s Covid-19 prevention measures. However, the risk of object-to-human transmission has added new challenges to pandemic control. Outbreaks in Beijing, Dalian, Qingdao and many other cities were linked to cold supply chains, while new cases in Kashgar and Shanghai suggested that measures must be taken to strengthen sterilization and disinfection of noncold chain logistics.

So far, no drug treatment has been proven to be effective after nearly a-year-long global fight against the pandemic. As early as March 20, the World Health Organization announced a large clinical trial called Solidarity to validate the efficacy of four untested Covid-19 treatment, only to find them all ineffective. Fortunately, thanks to our the long experience of treating the infected, the death rate of Covid -19 is on the decline.

People around the world are suddenly seeing hope as positive research findings and emergency government authorizations suggest vaccines are within reach. About 200 candidates using different technologies are under development around the world, including inactivated vaccines, adenovirus vector vaccines, recombinant protein subunit vaccines and mRNA vaccines. Among them, two vaccines built on a breakthrough technology that uses messenger mRNA showed effectiveness in preventing over 90% of Covid-19 cases. But massive challenges still lie ahead for distributing the vaccine, such as inadequate production capacity, storage and transportation.

Speaking at the Caixin Summit in November, Zhang Wenhong, director of the infectious diseases department at Huashan Hospital in Shanghai, said that until more than 60% of the population is vaccinated, China should maintain its current disease-control strategy of keeping new cases at a “dynamic zero” pace by adopting rapid mass testing and precision management. “China and some European countries take different strategies,” Zhang said. “In Britain and France, they tighten controls when the situation worsens but loosen restrictions when it turns better for economic considerations.”

The most vulnerable groups of people should have top priority for vaccination, Zhang said. This could significantly reduce the death rate of the pandemic.