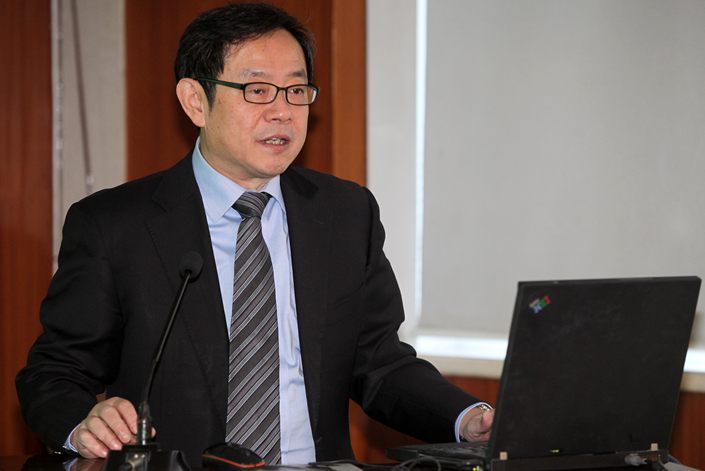 Feng Zijian, deputy director of the Chinese Center for Disease Control and Prevention.

China “will very likely prevent” a new spate of coronavirus infections this winter if it continues its current policies, a top public health official has said.

“If we uphold the strict disease control measures we have now, then a second wave, namely a widespread outbreak during the fall and winter, may not necessarily happen in our country,” Feng Zijian, the deputy director of the Chinese Center for Disease Control and Prevention, said in an exclusive interview with Caixin.

The coronavirus situation in China was “very safe overall,” he added.

Despite recording a smattering of isolated Covid-19 cases in recent weeks, China has avoided the kind of resurgent outbreaks seen in the United States and Europe. To control the spread of the virus, the Asian nation continues to restrict inbound travel, impose mandatory quarantines on arrival, and order targeted lockdowns and mass testing initiatives in response to local flare-ups.

Rising caseloads across the northern hemisphere reflect both the increased transmission of respiratory diseases in winter and an easing of pandemic restrictions such as the reopening of schools and workplaces, Feng said, adding that the rebounds increase the risk of so-called “imported” infections in China.

But the country’s existing disease controls have proved “extremely effective” at stopping the transmission of Covid-19 among the general population, he said, noting that so far this winter China had also recorded lower-than-normal rates of other respiratory and contact-borne ailments like flu, measles, rubella and foot-and-mouth disease compared with the equivalent period last year.

Despite spiraling Covid-19 infection rates, many countries have not witnessed hospitalizations and deaths on the same scale as earlier this year, a trend Feng mainly attributed to “our accumulation of experience of treating this disease and more orderly medical services.”

“Although there is still no precise cure, the overall quality of care is improving,” he said.

But he warned against complacency in fighting the pandemic, saying China should continue to encourage people to wear masks in public places and impose targeted lockdowns when outbreaks occur in order to reduce “population mixing.”

The judicious use of nucleic acid testing has also been “extremely important” in finding people with asymptomatic or mild Covid-19, Feng said.

Since controlling the worst of its outbreak in the spring, China has used partial or short-term shutdowns in Beijing and other cities to tamp down local hotspots.

More recently, the country has moved to tackle a string of infections among cargo workers in major cities like Shanghai, Tianjin and Dalian, some of whom are thought to have contracted the virus from contaminated frozen-food packaging.

The Chinese mainland logged 22 new coronavirus cases on Tuesday, down from 33 (links in Chinese) a day earlier, according to the National Health Commission. All of Tuesday’s new infections were imported except one: the cargo worker in Shanghai.

The additions brought the mainland’s total caseload to 86,267. The death toll remained unchanged at 4,634.