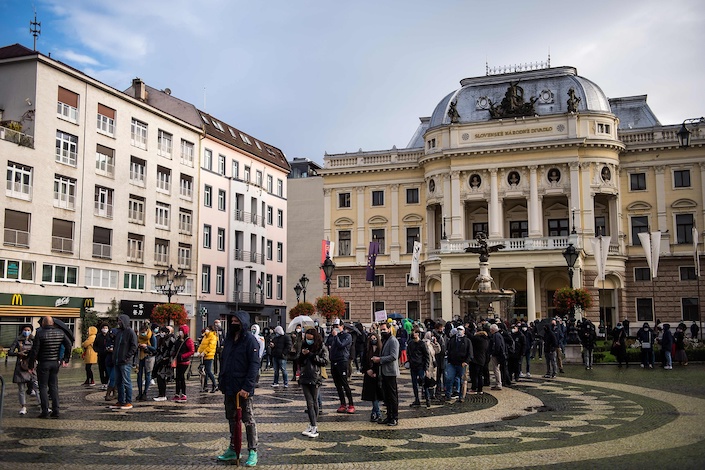 Slovakia became the first country of its size to conduct nationwide testing of 5.4 million people.

Eleven months after the first case of Covid-19 broke out in central China’s Wuhan, the world outside China continues racking up infections in an alarming rate. The approaching flu season is causing challenges by adding more pressure on already exhausted medical systems.

In China, the coronavirus has been largely contained. But to block its return from abroad, the nation is taking unprecedented and controversial measures to build up medical capacity, trace down every imported case and conduct mass testing in cities where sporadic new cases are found.

The U.S. reported nearly 100,000 new cases in a single day Friday, bring its total caseload to more than 9 million, according to Johns Hopkins University. In Europe, record numbers of new infections have forced countries including the U.K., France, Germany, and Belgium to impose renewed nationwide lockdowns. In China, new clusters of domestic cases were found in Qingdao and Kashgar, raising alarms among experts that the fight against the pandemic may not end soon.

“We must know that no place in the world can be secluded from the rest of the world,” said top Shanghai infectious diseases expert Zhang Wenhong. “As long as the global pandemic is not over, the epidemic in China will not be completely solved.” In April Zhang predicted that a second wave of Covid-19 pandemic globally would be likely to take place after the fall.

As people become increasingly fatigued with mask wearing, social distancing and hand hygiene after months of vigilance, many authorities say they expect the second wave to be worse than the first in the spring. That’s partly because the arrival of the winter influenza season means more people are likely to be infected with both the flu and Covid-19.

French President Emmanuel Macron said 400,000 people will die of coronavirus if the country does nothing to control a second wave that will be “more deadly than the first.” The U.S. Centers for Disease Control and Prevention (CDC) now projects there will be as many as 240,000 coronavirus deaths in the U.S. by Nov. 7.

As the number of cases abroad rises, so does the risk facing China.

“Once an imported case slips into China, local outbreaks are likely to occur,” said Pan Pinhua, professor and vice chairman of respiratory and critical care medicine of the Xiangya Hospital of Central South University in the central Chinese city of Changsha.

Part of the challenge for China is that the nation has just four intensive care unit (ICU) beds per 100,000 population. In the U.S., the figure was 34.2 in 2015, according to a paper published by the National Center for Biotechnology Information. Germany has 29.2, according to a paper published in the Intensive Care Medicine journal based on 2012 data. To avoid a squeeze on medical resources, countries with low per capita medical resources such as China must adopt a strict prevention and control strategy at the early stage of an epidemic, according to some studies.

Data has proved that low temperatures are often conducive to virus survival and transmission, which is why viral pneumonia and other respiratory infections usually peak in winter.

“Increased indoor activities in winter, closer human contact and worse ventilation with closed windows all create conditions for the spread of the virus,” said Jiang Qingwu, an epidemiologist and former dean of the School of Public Health at Fudan University.

Unlike other respiratory viruses such as influenza that spread mainly in the winter, the Covid-19 pathogen has demonstrated no seasonal pattern, according to experts including the emergencies chief for the World Health Organization (WHO).

More experts are now warning of a potentially deadly combination of Covid-19 and the flu. Both are contagious respiratory illnesses that share similar symptoms such as fever, cough, body aches, and sometimes vomiting and diarrhea. A double hit not only would mean more testing of fever patients but also would make it harder to distinguish Covid-19 from regular flu, delaying treatment and quarantine.

In late January, a patient in Beijing was admitted to a hospital for severe flu after testing negative three times for Covid-19. Only after he was put on a ventilator was the patient found to be positive for Covid-19 in a bronchoalveolar lavage test, in which a bronchoscope is passed through the mouth or nose to collect fluid from the lower respiratory system. This was considered a typical case that was initially diagnosed as flu but actually involved infection with both viruses.

The combination of Covid-19 and the flu could lead to hospitals being stretched to capacity. The United Nations’ WHO estimates that 1 billion people worldwide get the flu every year. In the U.S., the CDC estimates that there were 39 million to 56 million cases of flu between Oct. 1, 2019, and April, 4, 2020.

China reported 3.54 million flu cases in 2019, with only 269 deaths, a figure that scientists long believe to have been understated as deaths from pneumonia caused by the flu are not counted. An analysis led by Chinese scientists published in the medical journal Lancet Public Health in September 2019 found that there were 84,200 to 92,000 flu-related deaths in China each year.

Studies have shown that combined infections of influenza and Covid-19 result in more severe symptoms and longer duration of illness. In a study funded by the Italian Ministry of Health, the Rome Municipal Hospital for Infectious Diseases found that in 37 cases of Covid-19 and flu co-infection, all showed similar clinical symptoms such as fever, cough and shortness of breath. Nine cases, or about a quarter, presented acute respiratory distress syndrome with progressive deterioration. Six of them required intensive care monitoring and recovered, and three died.

The second wave of the pandemic is already pushing Europe into a medical crisis, with intensive care units quickly filling to the breaking point. France’s Macron warned that “at this stage, we know that whatever we do, nearly 9,000 patients will be in intensive care by mid-November, which is almost the entirety of French capacity.” Belgium, which doubled its intensive care capacity, is now preparing for decisions about which needy patients should get a bed.

China is bracing itself

China has been preparing since summer for a winter second wave. In Wuhan, the epicenter of China’s first outbreak, four makeshift hospitals that were set up in February in converted gyms and convention and exhibition centers to isolate and treat mild cases, remain on standby. Once a second outbreak occurs, each hospital can serve as many as 700 patients, said Ling Ruijie, vice president of Hubei Provincial Hospital of Integrated Chinese and Western Medicine, who is in charge of one of the makeshift hospitals.

“Not every city is like Shanghai,” Zhang said. “If there is an outbreak, the medical system will surely be under pressure.”

This is what China has been doing after learning a hard lesson in Wuhan. In September, Ruili, a border city in Yunnan, enacted a one-week lockdown and tested all 200,000 residents for the coronavirus after two people who illegally entered the city from Myanmar were found to have Covid-19.

In the latest domestic outbreak in far western China, the prefecture of Kashgar commenced mass testing of its entire population of 4.75 million.

In Europe, Slovakia became the first country of its size to conduct nationwide testing of 5.4 million people.

The aggressive testing seems to have worked in China. All the new clusters have been locally contained. By identifying asymptomatic cases and moving to block early transmission, the mass testing is the best take-no-risk approach, said Pan from Xiangya Hospital of Central South University.

But some argue that this approach costs too much and wastes medical resources. Wang Guangfa, a respiratory specialist from Peking University First Hospital in Beijing who was infected with Covid-19 in January during his visit to Wuhan and later recovered, said he disapproves of indiscriminate mass testing. Wuhan’s testing of its nearly 10 million people aimed to tell the world the city was safe more than to identify asymptomatic cases, Wang said.

China aims to take every necessary measure to return to zero Covid-19 cases, a strategy Feng Zijian, vice director of China’s Center for Disease Control and Prevention, calls a “fire extinguisher” approach. Ultimately, ending the pandemic will depend on vaccines, Feng said.

China is expanding the number of people receiving experimental Covid-19 vaccines. Two eastern cities are offering one to the general public, and a biotech company is providing another one free to students heading abroad, even as clinical trials are still underway to determine their safety and effectiveness.