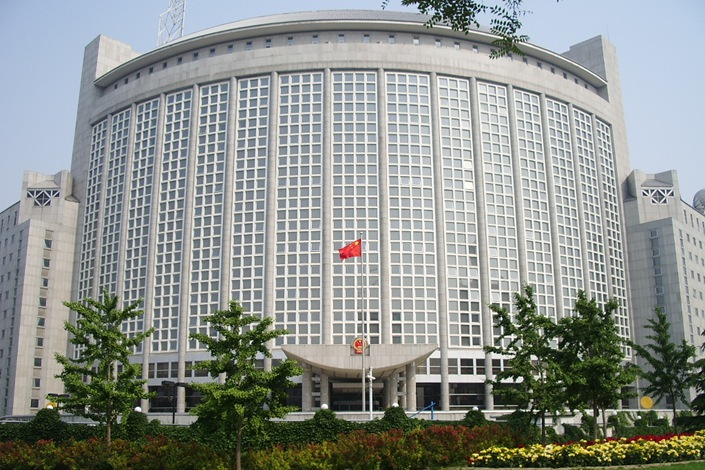 Ministry of Foreign Affairs in Beijing

In a year like no other, China has struggled in 2020 to cope with enormous external pressure, exerted in particular by the United States in waves of attacks and sanctions on multiple fronts, including the origin of the novel coronavirus, Hong Kong national security law, supply chain and investment decoupling, privacy and intellectual property disputes, air and maritime tensions, visa and media restrictions, and cyber, espionage and intelligence warfare ― not to mention the emergence of a quasi anti-China alliance consisting of the U.S., India, Japan and Australia.

Mobilizing all relevant federal government agencies in an so-called “whole-of-government” approach, Washington’s actions targeting China have culminated this year: blaming Beijing for what it called a failure in early containment of the new coronavirus in Wuhan, imposing sanctions on dozens of Chinese companies and senior officials, arresting and prosecuting Chinese scientists and researchers with alleged military backgrounds, closing down the Chinese consulate in Houston, and limiting Chinese journalists’ presence in the country.

Most of the year, Beijing had to retreat, defend and engage in tit-for-tat tactics, although some of which were not seen as effective, mostly because of the asymmetric interdependence between the two countries. Beijing has also refrained from retaliating directly against American companies, due to fears of hurting foreign investments in China. But the two sides’ strikes and counter strikes left immense damage that will be extremely difficult for Beijing and Washington, especially the incoming Biden administration, to reverse.

In March, seen as one such wolf-warrior, foreign ministry spokesman Zhao Lijian publicly speculated that the coronavirus was brought into China by U.S. military personnel ― a conspiracy theory that had triggered a diplomatic backlash with the U.S. In an interview with Axios, a U.S. digital media, Chinese ambassador Cui Tiankai described the conspiracy as “crazy ... not for diplomats to speculate (about).”

Two months later, when asked by CNN about China’s alleged “wolf warrior” diplomacy in a press conference during the annual gathering of the country’s legislature in late May, Chinese foreign minister Wang Yi said: “We never pick a fight or bully others, but we have principles and guts.”

"We will push back against any deliberate insult to resolutely defend our national honor and dignity. And we will refute all groundless slander with facts to resolutely uphold fairness, justice and human conscience," he said.

After being cornered diplomatically for about half a year, Beijing, to some extent, has turned the tables after the country got its Covid-19 outbreak under control this summer. China became the first major economy that came out of the pandemic and jump-started its economic recovery. With the status of being the only major economy to grow this year, Beijing is gaining momentum and beginning to retake lost ground.

Beijing has also wasted no time in advancing its regional trade agenda with Southeast Asian countries and the European Union this year. Last month, China signed the Regional Comprehensive Economic Partnership with 10 Southeast Asian countries and four Asian nations, creating the world’s largest free trade zone. President Xi Jinping’s announcement about the country’s interest in joining the Comprehensive and Progress Trans-Pacific Partnership was also regarded as a reassurance of Beijing’s commitment to further reform and opening-up.

Beijing’s push toward concluding of an investment agreement with the EU by the end of the year also serves as a way-out as headwinds from the U.S. remains strong. It fits a familiar pattern of Beijing’s diplomatic practices that when its relations with the U.S. soured, Beijing would again unite with the EU to counter the U.S.

However, the incoming Biden administration, which also plans to unite with its European allies to form a coordinated approach toward China, has already been alerted by the rapid progress of EU-China investment talks.

After learning that EU and German officials were echoing Beijing on Friday about the year-end deadline, Jake Sullivan, the incoming national security adviser appointed by President-elect Joe Biden, appealed to the EU on Twitter Tuesday that “The Biden-Harris administration would welcome early consultations with our European partners on our common concerns about China’s economic practices.”

Biden has also held a rather wary view of these practices. Despite calling Trump’s tariff war with China “self-defeating,” Biden had argued for “aggressive” retaliation against countries that break international trade rules by subsidizing their companies and stealing U.S. intellectual property.

China has been clearly paving the way for engagement with Biden, who has been generally seen as a leader from the Democratic Party establishment who favors traditional diplomacy instead of confrontation — a perception that Sino-U.S, watchers are still waiting to see whether it turns out to be true.

Earlier this month, Wang, the foreign minister, called for a “smooth transition” of China-U.S. relations to remove “disruptions and obstacles.” “The top priority is that both countries should work together to remove all kinds of disruptions and obstacles and achieve a smooth transition in China-U.S. relations,” the foreign minister said.

But experts remain cautious about whether a Biden White House could reset the U.S.’ China policy. He Yafei, a former Chinese vice foreign minister said in a Caixin column that the U.S.’ “strategic competition” with China “may not change in the near term.”

“The Biden administration will face daunting challenges in resolving domestic problems and adjusting foreign policy. Adjustments to China-U.S. relations will also be subject to constraints,” said He, who is now a distinguished professor at the Yenching Academy of Peking University.

Elizabeth Economy, senior fellow for China Studies at the New York-based Council on Foreign Relations, said in an analysis that “While it may appear as though these last-minute actions will make it more difficult for the incoming Biden administration, the opposite is true.”

“The more policies the Trump administration piles on, the greater the leverage and range of options it leaves for the Biden team,” she said. “The Biden administration will have the luxury of deciding how much to retain of what the Trump team has built. Some decisions, such as whether to maintain tariffs on $370 billion worth of Chinese goods, will be challenging.”