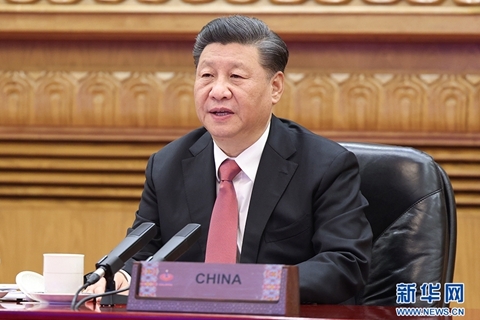 President Xi Jinping’s Friday announcement of China’s intent to join the Comprehensive and Progressive Trans-Pacific Partnership(CPTPP), a high-standard mega regional trade pact, has been seen as a bold move to reassure the world of the country’s continuing commitment to reform and opening-up.

The announcement at the virtual summit of the Asia-Pacific Economic Cooperation(APEC) came five days after China signed the 15-country Regional Comprehensive Economic Partnership (RCEP) on Nov. 15, also a regional trade pact that would boost the integration of East and Southeast Asia countries.

At the APEC summit, China’s declaration of intent also coincided with Japanese Prime Minister Yoshihide Suga’s remark at the APEC CEO Dialogues on Friday that as next year’s chair of the CPTPP, Japan aims to expand the membership of the trade pact. Among major economies, Britain and China have so far expressed a willingness to join.

In China, calls for furthering reform and opening-up formed the backdrop of the announcement to join the CPTPP.

President Xi’s announcement followed similar remarks by Premier Li Keqiang during an annual gathering of China’s top legislature, the National People’s Congress(NPC) in May, in a show of the Chinese top leadership’s willingness to further integrate the Chinese economy into free trade arrangements.

China faces growing concerns from Western countries over Beijing's policy direction in its relationship to the rest of the world, especially with regards to the policy of “dual-circulation,” the emphasizes of self-sufficiency amid the Covid-19 pandemic, and the pressure to decouple coming from U.S. policies.

Meanwhile, in high-profile ceremonies in the last two months, China celebrated anniversaries of its two economic zones at the forefront of reform and opening-up in Shenzhen and Shanghai.

Xi has urged the country to press forward the reform agenda with “greater political courage and wisdom” amid “unprecedented challenges” including pressures around global competition over technology and talent.

If formal talks would be launched, China however, would face an uphill task to negotiate an accession agreement with the current eleven members of the CPTPP, including Japan, Canada and Australia, particularly on some sensitive clauses such as state-owned enterprises and labour unions.

Tu Xinquan, a professor of international trade at the University of International Business and Economics in Beijing, told Caixin that if China proceeds with formal talks to join the CPTPP, it would need to negotiate with each individual member of the trade pact as approval to join needs to be unanimous.

Tu said that the CPTPP maintains a high-level of market liberalization. For instance, more than 95% of trade in goods among the CPTPP member countries are free of tariffs, which could create major pressure on Beijing to lower tariffs on agricultural and automobile products.

However, CPTPP standards on state-owned enterprises and labour unions could be the most difficult for Beijing to negotiate. CPTPP forbids government agencies to intervene in a companies’ decision-making process, and also protects workers’ abilities to organize in unions for the purpose of collective bargaining.

But Zhang Chunlin, former director at the World Bank’s finance, competitiveness and innovation department, said in a commentary published by Caixin (link in Chinese) that as China’s state-owned companies were able to meet the relevant standards of the World Trade Organization(WTO) when the country joined 20 years ago, there’s no reason to believe that today’s SOEs could not deal with the challenges of meeting CPTPP criteria.

Questions have also been raised over how China’s intention to join could push the United States to react.

The former U.S. President Barack Obama’s administration had long regarded the Trans-Pacific Partnership, the predecessor of the CPTPP, as an economic pillar to counter China’s rising influence in the Asia-Pacific.

Four years after the incumbent President Donald Trump withdrew from the pact in 2017, former Vice President Joe Biden who defeated Trump in the presidential election has not yet declared his formal position as the president-elect on the CPTPP.

Some trade experts believe that if bilateral relations between China and the U.S. do not improve, Washington could press its allies in the CPTPP to block China’s accession.

One of the tactics mentioned among trade specialists is that the U.S. could initiate the so-called “poison pill” clause in the renegotiated trilateral trade pact among the U.S., Canada and Mexico, known as USMCA.

Under the provision, if any of the three countries in the USMCA enters a trade deal with a "non-market country," the other two are free to quit in six months and form their own bilateral trade deal.

As China is not recognized by the U.S. as a market economy at the WTO, Washington could leverage the “poison pill” clause, forcing Canada, a CPTPP member, not to agree with China’s accession to the trade pact.

Trade specialists interviewed by Caixin also cautioned that CPTPP members such as Japan could also expect the U.S., under a Biden administration, to rejoin the mega free trade club, which may hinder China’s effort.