Cover Story: The Daunting Challenge of Immunizing the World 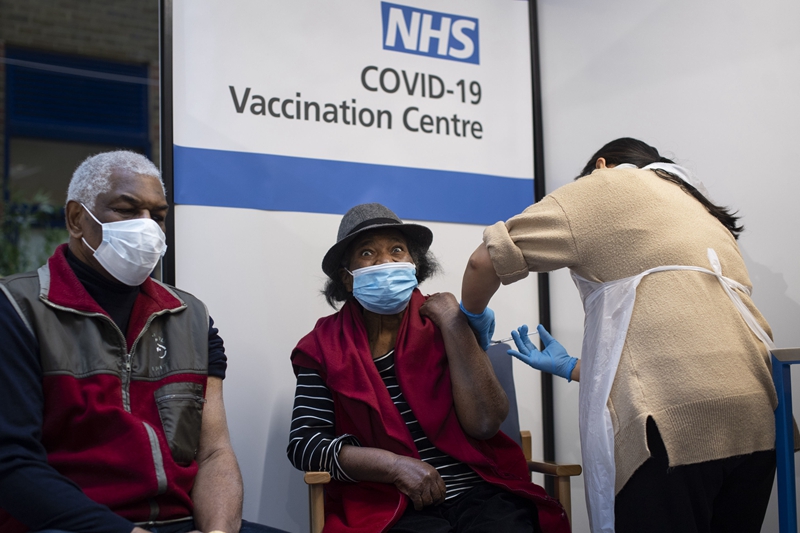 Britain on December 8 began the biggest vaccination programme in the country's history with a new Covid-19 vaccines.

People around the world are suddenly seeing hope as positive research findings and emergency government authorizations suggest vaccines to end the Covid-19 pandemic are just within reach. But massive challenges still lie ahead.

These include quickly ramping up enough production capacity to inoculate billions of people in the midst of a pandemic that has claimed more than 1.5 million lives in just a year. And in addition to the normal problems of transporting vaccines to the remotest corners of the world, the Covid-19 inoculations require special handling at super-cold temperatures.

World scientists have made unprecedented efforts to produce effective vaccines against SARS-COV-2, the virus behind the Covid-19 pandemic. Several major vaccine developers have reported promising results in recent weeks, leading to emergency government approvals for public use. The one-year development trajectory compares with the five years spent creating the first Ebola vaccine and the 20-year wait for a polio vaccine.

The U.S. Food and Drug Administration (FDA) Friday approved a vaccine developed by American drugmaker Pfizer and its German partner BioNTech, following Britain and Canada to become the third major country to grant emergency authorization for an inoculation. The vaccine, built on a breakthrough technology that uses messenger RNA, showed effectiveness in preventing 95% of Covid-19 cases.

The other most promising candidate based on similar technology is awaiting government clearances after wrapping up clinical trials. The vaccine, developed by U.S. biotech company Moderna, reported a 94.1% efficacy rate. Another treatment jointly developed by the University of Oxford and the British pharmaceutical company AstraZeneca is racing toward final rollout with a reported efficacy rate of around 70%.

About 200 other candidates using different technologies are under development worldwide with more than 10 in the final stage of human trials, including four from China.

Last week, a vaccine developed by China’s state-owned pharmaceutical giant Sinopharm was reported to have protected 86% of people against Covid-19 in trials conducted in the United Arab Emirates, winning approval for full public use in the Mideast country. The vaccine is based on a more traditional technology using an inactivated version of the coronavirus to stimulate human immune systems.

China, the first country hit by the pandemic, has sought to conduct final stages of clinic trials for vaccines abroad after the domestic outbreak was brought under control. The country pledged to distribute its shots around the developing world.

The high efficacy rate of the frontrunners excited the public. But some experts said it will take more time to examine the vaccines’ effectiveness and safety given their much shorter period of clinic trials compared with previous vaccine development.

Jesse Goodman, the former chief scientist of the FDA, said test results from the vaccines are “very promising,” though there are still many questions to be answered, such as how long immunity will last and whether the vaccines will provide the same protection to different age groups.

Meanwhile, full-scale vaccination will pose a significant challenge to every country, testing production and distribution capacity. Experts at Johns Hopkins University in Baltimore estimated that at least 10 billion doses of Covid-19 vaccines will be needed to inoculate 70% to 90% of the global population of 7.8 billion, enough to form herd immunity. Most of the current vaccines require two shots. It is still unclear whether the huge demand can be fully met.

An even greater challenge comes from the unusual storage requirements of the Pfizer and Moderna vaccines, which require ultracold freezing. This creates a major test for logistics systems, especially for underdeveloped regions.

Major countries have set in motion the unprecedented immunization task. The U.S. expects the first shipments of 22.5 million doses of the Pfizer vaccine by Dec. 15, while the country is weighing approval of the Moderna shot. Inoculations for high-risk groups in the U.S. are scheduled to start soon. U.S. Secretary of Health and Human Services Alex Azar said in November that about 20 million American people will get vaccinations by the end of the year.

Investment bank Goldman Sachs predicted that about 200 million Americans will be vaccinated by the end of next year, allowing the country to fully reopen.

The U.K., which approved the Pfizer shot Dec. 2, started vaccinations for people older than 80 and some health-care staff. The country placed orders for nearly 400 million doses with major vaccine developers.

Japan said it expected vaccines to be available in the first half of 2021. The country ordered 290 million doses, which could cover its whole population of 127 million.

China is also gearing up for public vaccinations. The nation already administered shots developed by Sinopharm and domestic rival CanSino Biologics to hundreds of thousands of people under emergency authorizations before the final trials are complete.

China also placed orders with Pfizer and AstraZeneca for their vaccines. Caixin learned that BioNTech’s Chinese partner Shanghai Fosun Pharmaceutical Group plans to import 7.2 million doses of the German company’s Covid-19 vaccine in the first half of 2021.

According to Duke University in Durham, North Carolina, countries around the world have placed Covid-19 vaccine orders totaling 9.6 billion doses.

Global drugmakers have been dialing up capacity in preparation for massive vaccine production. Pfizer and BioNTech said they expected to produce 50 million doses of their vaccines by the end of this year and 1.3 billion doses by the end of next year for global use.

“A key challenge we are facing is to unprecedentedly boost our production capacity in a short time to cope with the pandemic,” BioNTech said in a statement to Caixin.

Moderna said it would work with partners to produce 20 million shots this year and increase annual capacity to as many as 1 billion doses by the end of 2021. AstraZeneca announced a more ambitious plan to produce 3 billion doses of its vaccine in 2021. Other major vaccine makers including Sanofi SA and Johnson & Johnson also revealed plans to produce Covid-19 vaccines.

But analysts said there are uncertainties whether the ambitious production goals can be met, especially for the new mRNA-based vaccines that have never been put into mass production before.

As the world’s most populous country, China also faces immense challenges to produce enough vaccines to meet domestic demand. Due to strict virus control measures, China has a much lower infection rate than most other countries, but that also poses challenges before the country can fully open to the outside world as relatively few people have developed immunity.

Zheng Zhongwei, head of China’s coronavirus vaccine task force, said in October the country’s annual vaccine production capacity will reach 610 million doses by the end of this year. But that will be far from enough for a country of 1.4 billion people, according to Huang Yanzhong, a public health professor at Northwestern University in the U.S.

Several experts said that to get enough people inoculated, China will need nearly 3 billion doses of the Covid-19 vaccines. According to plans released by major drugmakers, the country may be able to produce 2 billion doses by the end of 2021.

Shanghai Fosun said part of the vaccines it plans to order from Pfizer will be produced in BioNTech’s German plant with the rest to be made in China. But the Pfizer vaccine is still undergoing domestic clinical studies before it can get Chinese regulatory approval.

According to the World Health Organization, about 50% of global vaccine supplies are wasted every year because of temperature control failures during distribution. There will be tremendous logistics challenges for the Covid-19 vaccines due to their stricter temperature requirements.

Airlines, logistics companies and warehouse operators around the world are scrambling to build up ultracold shipping and storage facilities for global distribution of the vaccines.

Shanghai Fosun built a warehouse near the Pudong International Airport in Shanghai that can maintain ultracold temperatures for the Pfizer vaccine, a company source said. The company is also working with Sinopharm to set up special logistics facilities for vaccine distribution.

Compared with the Pfizer and Moderna vaccines, the shot made by Sinopharm has less strict requirements on temperature control. It can be transported and stored at 2–8 degrees Celsius. However, the inactivated vaccine requires a higher safety level in its production procedure, making it harder for vaccine makers to quickly expand production, said Zhu Huachen, a public health professor at Hong Kong University.

Strict temperature requirements on vaccine transport and storage make it especially difficult for people in underdeveloped regions to get the vaccines. Research by Deutsche Post and McKinsey & Co. found that a third of the global population lives where low-temperature logistics facilities are inadequate.

“It is a tough journey for vaccines to reach people in remote areas in Africa from the manufacturers,” said Wu Yunong, who works for a nonprofit organization.

“Transport (of the Covid-19 vaccines) needs strict temperature control from the beginning to the last mile, and no single mistake can be allowed,” said a person at Kuehne + Nagel International AG, a leading global logistics company that is working on the vaccine transport plan.