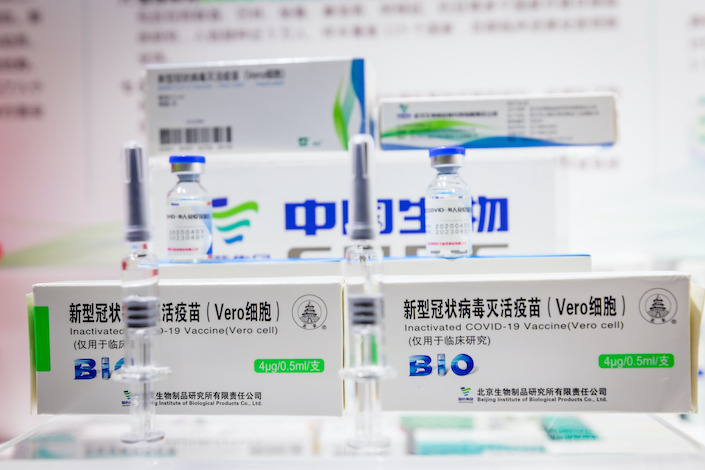 Any residents with an urgent need for vaccination can consult community health centers, Jiaxing’s center for disease control and prevention (CDC) said in a statement on its official WeChat account. A person close to Sinovac told Caixin that Zhejiang bought 2 million doses of vaccines. Another city in Zhejiang province, Yiwu, is also offering walk-in Covid-19 vaccines to residents. The first batch of vaccinations was concluded at a community health center, Caixin learned.

The programs represent a further expansion of Covid-19 vaccinations in China using experimental inoculations even as clinical trials are still underway to determine their safety and effectiveness. China has gained much greater control over the coronavirus pandemic than much of the rest of the world, where the disease continues raging.

China officially launched its emergency-use program in July, but certain state-owned companies internally started having employees take the vaccine as early as June, workers told Caixin. Since then, hundreds of thousands of people have taken the experimental coronavirus vaccine, including employees of the vaccine developers, essential workers and people working abroad.

Vaccines developed by Sinovac, China National Biotec Group (CNBG) and CanSino Biologics have been approved for emergency use. All three vaccines are still undergoing phase III trials to prove they are safe and effective. It isn’t yet known how long the inoculations may provide immunity to the coronavirus.

Zheng Zhongwei, the National Health Commission official in charge of coronavirus vaccines, said in August that emergency use of the experimental vaccines should be limited to people within the prescribed scope, such as medical workers, pandemic response officials and border inspection agents. To prevent another outbreak in the fall and winter, it may be appropriate to expand the scope of emergency use to include essential workers such as grocery store staff, transportation workers and workers in the service sector, Zheng said.

The expansion of emergency experimental vaccines to students has raised safety and ethical concerns. In addition, the process of gaining access to the inoculations seems haphazard and chaotic, according to interviews with students.

CNBG started accepting vaccination appointments in Beijing and Wuhan, according to media reports citing people familiar with the matter. People could make appointments by scanning a QR code or through a mini app link. They were to receive a vaccination notice at designated sites in about two weeks, and students seeking to study abroad would be given priority, the reports said.

As of Oct. 12, the mini app showed that more than 90,000 people requested vaccinations. An insider from CNBG said Oct. 13 that the media reports were not true, and that same day the mini app link couldn’t be opened, citing “system maintenance.”

Some students who plan to study abroad said they still received the vaccine through the mini app link, Caixin learned, even the day after the link stopped working. Student Li Yi (a pseudonym), said he received the CNBG vaccine Oct. 11 in Beijing.

“So many people have received the vaccine before the students, and they are fine,” Li said.

Applicants need to provide copies of flight tickets, valid visas and letters from foreign schools for verification. Chen said she received a text message from CNBG Oct. 6 providing a link to a WeChat group consisting of applicants who received vaccination notices. There were already more than 200 people in the group, and there are more such groups, Chen said. Another student said he was in a vaccination notice group with nearly 2,000 members.

CNBG’s staff told members of the WeChat group that no vaccine is 100% effective and the suggested immune period is 28 days, Chen said. They also suggested that students continue to do their best to protect themselves abroad. Feeling unsure about the effectiveness of the vaccine, Chen eventually gave up on it and delayed her enrollment in the U.K school for a year.

According to CNBG’s vaccination consent agreement circulated online, previous studies on animals found that vaccinated subjects could be infected again or show aggravated symptoms, even though the Phase II trials in humans didn’t observe similar results. As the Phase III trials have not yet been completed, it’s still not clear whether there are such safety issues, the consent agreement said.

The insider from CNBG said health regulators approved emergency use of the vaccine by students, but specific procedures haven’t been finalized. The central and provincial governments have not reached agreement on who should bear the cost.

How safe are the vaccines?

A study on animals conducted in Hong Kong found that vaccinated monkeys showed a phenomenon called “antibody dependent enhancement (ADE),” in which the body reacts more negatively to a virus after vaccination rather than developing protection, said Gao Fu, director of China’s Center for Disease Control and Prevention. But other studies showed no ADE.

“There are some different results in studies, so we still have a gap to fill in the scientific cognition in this respect,” Gao said.

Domestically developed vaccines have shown no safety problems in phase I and II clinical trials, but the duration of protection remains to be seen.

“I think it would be quite good if we could achieve protection of at least six months to one year,” said Zhao Guoping, an academician with the Chinese Academy of Sciences. The ADE effect has not been observed in human studies, but with the increase in research and vaccinations, there is the possibility of higher-than-expected frequency, he said.


Download our app to receive breaking news alerts and read the news on the go.