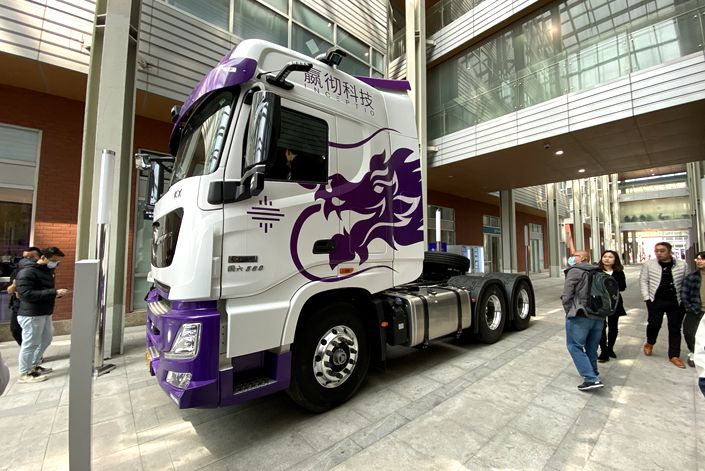 A truck equipped with an autonomous driving system is unveiled by Inceptio Technology in Shanghai on March 10. Photo: VCG

Autonomous truck startup Inceptio Technology launched its latest autopilot system Wednesday, aiming to achieve mass production of vehicles equipped with it by the end of this year.

The Level 3 category applies to vehicles that can drive themselves only under certain road conditions, such as on highways.

The release of Inceptio Technology’s autopilot system comes as self-driving technology expands from being used in sedan passenger cars to cargo-loaded trucks.

The technology is deemed safer for driverless vehicles that transport goods than it is for vehicles that carry passengers, industry experts said. They noted that driving along predetermined logistics routes to load and deliver cargo is comparatively straightforward.

But the research and development of self-driving technology is challenging as, unlike sedans, the weight of trucks varies significantly based on the amount and type of cargo being carried.

Inceptio Technology CEO Yang Ruigang said that if trucks were guided by an autopilot system designed for cars, they would be likely to deviate and enter the wrong lane when making a turn.

Combined with a prime mover and a trailer with a malleable connector, the autopilot system needs to maintain precise control over the vehicle’s speed and direction.

The Xuan Yuan technology is designed to limit the deviation to within 10 centimeters (4 inches), regardless of the loaded weights and road conditions, Yang said.

The Shanghai-based company expects that the number of trucks built with its system will grow to 80,000 by 2024. Assuming 250,000 kilometers (155,340 miles) per vehicle, they are predicted to cover 20 billion kilometers a year.

Yang said Inceptio Technology will upgrade the system based on user information and data yielded from these on road operations.

On Tuesday, Plus — an autonomous truck startup that splits its operations between the U.S., China and Europe — announced it will equip the next generation of its autonomous truck driving system with U.S. chipmaker Nvidia’s Drive Orin platform. The system is slated to be launched in 2022.

The tie-up will involve the two companies collaborating to develop Level 4 autonomous trucks, requiring no human assistance except in emergencies, and moving to mass production by 2024.