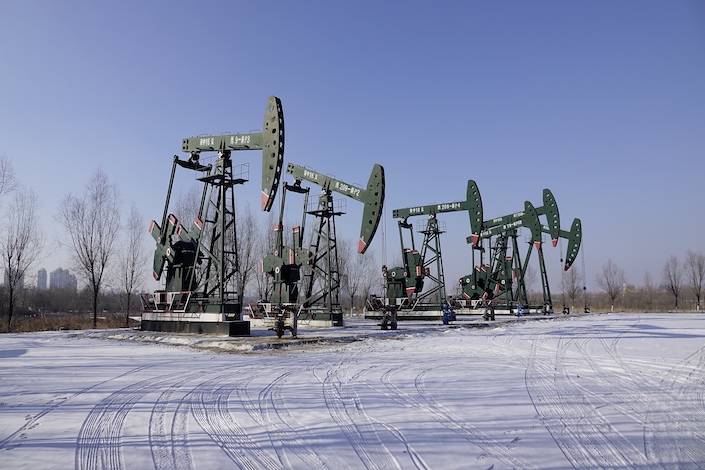 The 5,000 tons of super heavy oil and 10,000 tons of heavy oil produced by CNPC’s Liaohe oil field, were auctioned Friday on Dalian Petroleum Exchange’s online platform, according to a local newspaper report. The exchange is a wholly owned unit of CNPC. Eight local refiners in northeast China’s Liaoning province participated in the bidding.

CNPC fetched a higher price in the auction than under the existing system of distributing the commodity using planned quota prices. The oil fetched about 3,100 yuan ($476) a ton, compared with the internal planned quota price of 2,700 yuan set by the Liaohe oil field, according a bidding statement. The auction price was equivalent to global crude prices. Benchmark Brent crude futures for May are about $68 a barrel, equivalent to $465 a ton.

Crude sales between CNPC’s upstream production units and downstream refiners have long been mainly based on internally agreed pricing. Both sides have disputed whether the pricing is fair. Amid wide fluctuations in oil prices since 2020, CNPC’s various sectors have been under greater profit pressure. The crude sale overhaul will help CNPC to seek fair pricing for internal resource allocation, according to industry experts.

The new system allows the state-owned oil producer to form an effective price signal based on competition in the open market and provide a reference price for crude sales within the group, said Liu Haiquan, senior director of downstream information at HIS Markit, an international energy consultancy.

The Liaohe oil field in Liaoning province, with total proven reserves of 6.87 billion barrels, will auction a total of 260,000 tons of crude online this year, said Huo Guangjun, general manager of the Dalian Petroleum Exchange. The crude was originally allocated to local refiners through a planned quota. Now the online auction is part of CNPC’s restructuring to marketize sales of the commodity, Huo said.

None of the bidders in the auction were CNPC’s refinery units. Liu and Huo said CNPC’s refining and chemical units will not be included in the spot bidding market in the short term.