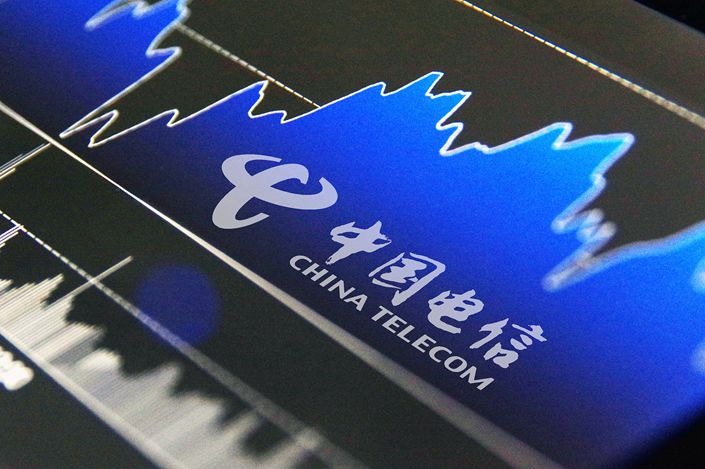 Hong Kong-listed China Telecom announced a plan Tuesday to issue up to 12.1 billion shares in a secondary listing on the Shanghai Stock Exchange. Photo: VCG

State-owned telecom operator China Telecom Corp. Ltd. will find there are fewer barriers to listing on a Chinese mainland bourse than in the past, as regulators have grown less anxious about the market impact of such a large company floating shares, a source close to financial regulators told Caixin.

On Tuesday, the Hong Kong-listed giant announced a plan to issue up to 12.1 billion A shares in a secondary listing on the Shanghai Stock Exchange’s main board.

Based on Thursday’s closing price of its Hong Kong shares, China Telecom could raise around $4.1 billion from the listing. However, a person at a joint-venture brokerage told Caixin that the company’s mainland debut ought to be priced higher than the Hong Kong shares.

As a state-owned enterprise, China Telecom may need to set its offering price in the Shanghai listing at least 1 time its net assets per share to avoid the accusation of pricing state-owned assets too low, the person said, which would lead to an offering price roughly double that of the Hong Kong shares.

The announcement of the plan comes after China Telecom, along with peers China Mobile and China Unicom, saw trading in their American depositary receipts suspended on the New York Stock Exchange on Jan. 11, which was due to an executive order from then-U.S. President Donald Trump.

Previously, China Telecom made several attempts to list on the mainland, the source close to regulators said, but “regulators had a lot of concerns due to its huge size.”

However, as the fundraising size of the Shanghai leg of Ant Group Co. Ltd.’s flopped dual IPO reached as high as over 100 billion yuan ($15.3 billion), regulators now have a better idea of how large the market’s capacity can be and are no longer excessively worried about the impact of large companies listing on the market, the source said.

Industry analysts have speculated previously that regulators may have worried about such a large IPO absorbing excessive amounts of liquidity on the market.

As China Telecom is a mainland-registered entity listed in Hong Kong, it could be easy for the company to list on the mainland compared with some Chinese companies that are registered overseas.

Over the past few years, the Chinese government has encouraged (link in Chinese) large tech companies listed outside the mainland to float shares in either Shanghai or Shenzhen.

Zhou Wenmin and Denise Jia contributed reporting to this story.