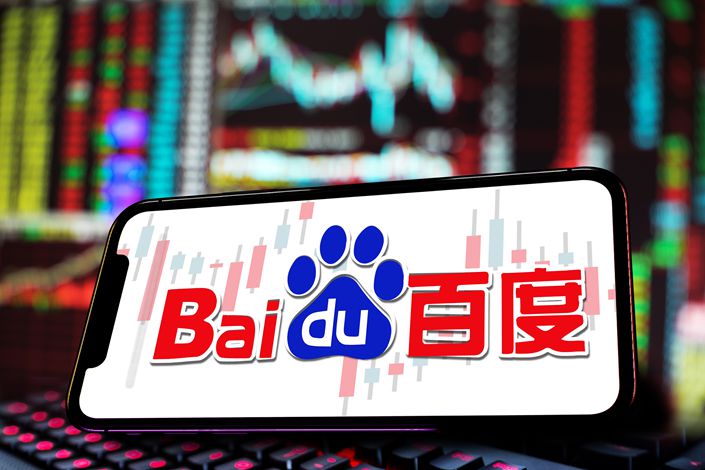 Four years after first losing its status as one of China’s top-three internet companies, search giant Baidu Inc. is turning heads once more after reporting strong fourth-quarter earnings that lifted its share price back to highs not seen since April 2018.

Its latest results show the company remains addicted to its core search business and the advertising revenue it generates, which has stagnated in recent years. But after years of failed efforts in everything from e-commerce to takeout dining, China’s most famous one-trick pony is finally starting to find new growth engines.

By market close Feb. 26, the week after it announced the earnings, Baidu’s stock was more than double its level from early November 2020, bringing its total market value to $96.7 billion. Its shares have given back some gains since then, but its market value remains solidly above the $90 billion mark.

The company gave investors more to cheer about this week when it announced it had filed to become the latest New York-listed Chinese internet firm to make a secondary IPO in Hong Kong. Baidu said it aimed to raise as much as HK$28 billion ($3.6 billion) in the listing, which would become the second such share sale in the city this year by a U.S.-traded Chinese company. Both Alibaba Group Holding Ltd. and JD.com Inc. have already made similar dual listings.

Dragged by a sharp downturn in advertising spending during the pandemic, Baidu’s revenue shrank in the first half of 2020 before growing by a whisker by 0.54% in the third quarter. But things picked up in the fourth quarter when it brought in 30.3 billion yuan ($4.7 billion) in revenue, a year-on-year increase of 5%.

Almost 19 billion yuan of that was advertising revenue — roughly the same amount as a year earlier, indicating it remains hooked on the legacy business. Instead, the driver of Baidu’s fourth-quarter growth came from some of its newer business, including the cloud, smart driving and other artificial intelligence (AI), which collectively increased by just over half to 4.2 billion yuan.

Baidu was once an internet leader with its Chinese search business, beating out the likes of Google LLC to become the market’s dominant player. But lately it has been losing business to a newer generation of nimbler, hungrier competitors like ByteDance Ltd., owner of the popular Jinri Toutiao news app and the even more popular Douyin short video app.

For years Baidu was one of China’s “Big Three” internet companies, alongside Alibaba and Tencent Holdings Ltd. But while the other two became true colossuses, worth more than $700 billion, Baidu stagnated due to heavy reliance on its relatively mature search business. Its current market value is smaller than far younger companies such as online-to-offline services specialist Meituan, worth $260 billion, and even the newly listed No. 2 short video app operator Kuaishou Technology, at $164 billion.

Baidu has spent much of the last decade looking for new growth areas to break its online advertising addiction. In a preamble to its latest financial report, founder Robin Li said the company is prepared to completely integrate with video-based social media platform YY Live, which it recently bought for $3.6 billion and is one of its most promising recent acquisitions into a new area.

Baidu has made other more organic efforts at diversification. In its latest financial report, it said new AI businesses represented by intelligent cloud, intelligent driving and other cutting-edge services have become new drivers of its medium- and long-term growth.

According to the China Artificial Intelligence Cloud Service Market Research Report published by International Data Corp. (IDC) last year, Baidu Intelligent Cloud was the biggest player in China’s public AI cloud service market last year, and has ranked first in the AI cloud market for three consecutive years. To further improve its intelligent cloud algorithms, Baidu disclosed that its self-developed Kunlun 2 chip would soon be mass-produced for use in multiple business areas including web search, the Internet of Things and intelligent transportation.

Despite its promise, the intelligent cloud business is unlikely to be very profitable in its initial stages, admitted Baidu Chief Financial Officer Herman Yu. “Baidu does not expect to see any improvement of the current profit margin. But considering the life cycle of our current products, the profit margin will increase over time,” he said.

Baidu’s has continued to pump funds into developing of its AI businesses, despite its lacking contribution to the bottom line. The company ranks among the top large-scale domestic tech-based internet companies in terms of research and development spending. Last year such spending took up 18.2% of its total revenue, while Alibaba’s only accounted for 8.5% over the same period.

Smart vehicle systems — consisting of an autonomous driving platform, the “internet of vehicles” and automobile manufacturing — is another major area where Baidu plans to apply its artificial intelligence strategy. The company says it has recently made breakthroughs in autonomous driving technology, and the path ahead for commercialization of its driverless vehicle Apollo Project is gradually becoming clear.

The Apollo business has three main units: Apollo Self Driving (ASD), Robotaxi and the Baidu-Geely auto factory. That latest piece of the puzzle was announced in January, when Baidu said it would partner with Geely to establish a new intelligent vehicle company, stepping into the vehicle manufacturing business.

While it may hold out big potential for Baidu, the smart driving business is still in its infancy. But the potential hasn’t stopped many from betting on the company’s future.

Huang Qun, an analyst with CMB International Securities Ltd., believes that Baidu’s technical advantages in real-time mapping, cloud computing, mileage test data and its mobile ecosystem will help it differentiate itself from the relatively crowded field of companies in the space. China International Capital Corp. Ltd. (CICC) has estimated the value of Baidu’s intelligent driving business at $53.9 billion alone, which would translate to more than half the company’s value based on its latest stock price.

Analysis from Citic Securities Co. Ltd. suggests that Baidu’s smart vehicle business may be comparable to Chinese leaders Nio Inc., Xpeng Inc. and Li Auto Inc., all of which saw significant increases in market value last year on bullishness about their prospects. ARK Invest founder Catherine Wood also has faith in Baidu’s vehicle manufacturing business, saying the company is currently the only Chinese concept stock among the investor’s top 10 holdings.