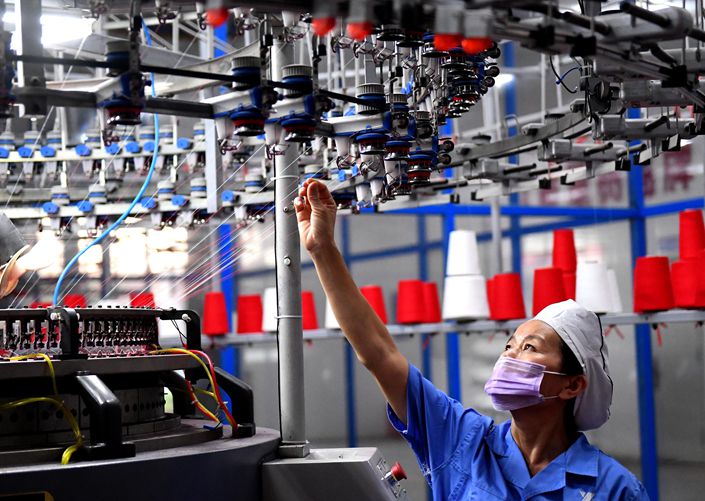 Let me tell you a personal story that offers a glimpse into how China’s industrial policy and the domestic market have evolved since the 1980s.

Thirty years ago, I was doing research and considering different theories about industrial policy as a graduate student at the then-Shaanxi Institute of Finance and Economics (today’s School of Economics and Finance at Xi’an Jiaotong University).

In the northwestern city of Xi’an in the early 1980s, a question puzzled us. Some local enterprises owned by the military were starting to produce civilian products. Despite having the most advanced technology, many of them were failing to compete with the products of township-level enterprises. Why was that so?

I had just gotten to graduate school at the time and followed my professors in researching the issue. According to my professors’ findings, the success of township-level enterprises was a result of their flexible or even “illegal” means of competition, such as, bribing the people who did the buying for shopping centers or work units. However, what I personally heard and saw over the course of my investigation led me to a different conclusion.

A tale of two fans

For example, one of the companies in our study was among China’s top military enterprises. It had been transformed into an electric-fan manufacturer and was known for having the most advanced technology and highest quality products. Nevertheless, at an export fair that year, their order numbers were far lower than those of some township-level enterprises. I conducted a survey to find out why foreign buyers did not want to buy this company’s electric fans.

Its primary product was a high-end multi-function floor-standing electric fan. The fan features included: adjustable height, 180-degree rotation and a built-in light and a built-in radio. Because it combined different functions, it cost way much more than a simple single-function electric fan. But at that time, televisions and air conditioners had already become popular in developed countries. Foreign buyers were mainly looking for electric fans for auxiliary ventilation in kitchens, garages or storage spaces. They weren’t interested in anything complicated.

One salesperson described the scene vividly: trying to turn on the electric fan, foreign buyers would press a power button and activate the radio; they’d press another and turn on the light; they’d press yet another button and the fan would begin to oscillate, but the propellers remained motionless. In contrast, the cheaper, the more user-friendly fans produced by township-level enterprises were better able to meet market demand and find favor with foreign buyers, even though they only had a single function.

During my survey, I learned that China had formulated a special management policy for the electric fan industry, which would later be called “industrial policy.”

At that time, the Chinese government thought that the country had too many electric fan manufacturers. Domestic experts pointed out that in foreign countries, there were only a few large manufacturers, able to provide quality products on a massive scale. At that time, an expert survey organized by what was then China’s Ministry of Light Industry estimated that by 1985, nationwide demand for electric fans would come to 12 million at most. However, the number of electric fans produced domestically had already exceeded this figure. In response, the ministry issued a document in 1982 to slow the growth of the electric fan industry, halting the construction of unapproved enterprises, shutting down established factories and preventing the construction of new factories.

But that year China’s production capacity for electric fans had already exceeded 50 million units, and output was over 40 million, with half for export and half for the domestic market. Consequently, the controls were never implemented. Even more interesting, the qualified model enterprises identified by the document were actually not competitive in the market. In 1985, three of the top four electric fan manufacturers were “illegal” enterprises established without government approval.

Between the planned and market economies

In the mid to late 1980s, industrial policy gained attention as a common concern of industrialists, economists and the government. At that time, many industries were facing the same problem that electric fan manufacturers had confronted years ago — fierce competition ignited by overcapacity and new entrants to the market. China’s washing machine, refrigerator, television, textile and light vehicle industries were all in trouble.

It was then that the government published a translation of the “Industrial Policy of Japan” by professor Ryutaro Komiya, which argued that industrial policy played a significant role in Japan’s growth after World War II.

In China, regulating industrial development with industrial policy proved to have the greatest common denominator: those in favor of the market-based allocation of resources thought industrial policy was more market-oriented than a planned system, and those in support of state resource allocation saw it as more planned than a market system. Industrial policy thus became an important tool for government departments to handle the sector’s issues from the mid-1980s to mid-1990s.

However, based on my preliminary research, my experience studying overseas and my own research into this matter, I have to voice dissent.

Over the course of six or seven years, I conducted detailed surveys of various industries, carried out comprehensive case studies on dozens of enterprises, and analyzed 69 different industrial policies issued by the central Chinese government between 1981 and 1996.

In the early 1990s, I wrote a rather influential academic paper entitled “Public Choice in China’s Industrial Policy,” which was the first paper in China to apply public choice theory to the study of industrial policy. This publication established an analytical framework that it then used to conduct empirical research.

The paper marked two breakthroughs in China. First, rather than taking the government as a representative of the overall interest, it took government behavior (in industrial policy formulation and implementation) as its object of analysis. Second, it refuted the view that market failure is always a sufficient or necessary condition for industrial policy intervention, since the cost of government interference may often be even higher.

Recognized as a groundbreaking research in the field of industrial policy, the paper was awarded the Sun Yefang Economic Science Award in 1995. In addition to this paper, I later conducted an entire series of research on industrial policy.

When I later started working at the State Council, one leader joked that the expert who criticized industrial policy was now going to be the one making that policy herself. I replied with a smile, saying that was then and this is now; industrial policy has improved significantly.

Indeed, since the late 1990s, industrial policy in China has been transformed from a selective policy to a functional policy — thanks in large part to the leadership of the National Development and Reform Commission, which at the time was directed by a certain well-known scholar — where the purpose is no longer for the government to designate which industries and enterprises are qualified for further development, but to create a level corporate playing field, encourage research and development and support internationalization.

Later, I put particular emphasis on industrial exit assistance policy, which helps the employees of enterprises that have failed to compete to help with the smooth restructuring of industries. I had also planned to analyze the effects of the aforementioned functional industrial policy but with my change in position, I could not complete this work.

However, China’s track record in formulating and implementing industrial policy does not provide sufficient evidence for the acceptance of these premises. Industrial policymakers and executives do not only consider the interests of the whole; they also take rather factional interests into account. These will at the very least include government power and related material interests, local interests, departmental and other group interests, opportunities for personal promotion, degree of support for the government and concerns of political stability. Many cases have illustrated that addressing industrial development issues with industrial policy may come at a high cost. This is a problem of “government failure” …

This paper analyzes more than 10 years of China’s experience in industrial restructuring and industrial policy to show that the assumption of the government’s impartiality and objectivity as a policymaking body representative of the overall interest fails to meet certain prerequisites. But neither is the other extreme — one of a completely self-interested government — reflected in reality. In practice, government behavior falls somewhere in between, depending on both self-interest and the interest of the whole. With the development of the market economy, the Chinese government will be challenged by the same problems, incentives and pressures that other market economies have faced in their own decision-making. Theories and analyses of government behavior in market economy countries can therefore provide useful inspiration and reference for our own research.