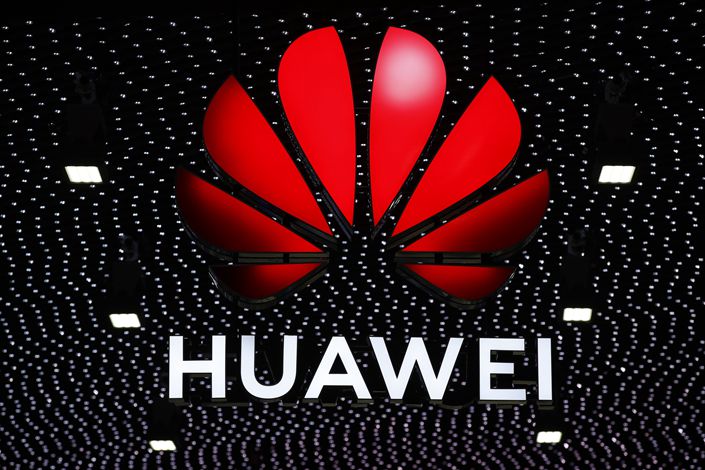 An illuminated logo stands above the Huawei stand during the opening day of the MWC Barcelona in Barcelona, Spain, on Feb. 25, 2019. Photo: Bloomberg

(Bloomberg) — Six months after the Trump administration dealt a crushing blow to Huawei Technologies Co.’s smartphone business, the Chinese telecommunications giant is turning to less glamorous alternatives that may eventually offset the decline of its biggest revenue contributor.

Among its newest customers is a fish farm in eastern China that’s twice the size of New York’s Central Park. The farm is covered with tens of thousands of solar panels outfitted with Huawei’s inverters to shield its fish from excessive sunlight while generating power. About 370 miles to the west in coal-rich Shanxi province, wireless sensors and cameras deep beneath the earth monitor oxygen levels and potential machine malfunctions in mine pit — all supplied by the tech titan. And next month, a shiny new electric car featuring its lidar sensor will debut at China’s largest auto show.

Once the world’s largest smartphone maker, the Chinese corporation has seen a series of U.S. sanctions almost obliterate its lucrative consumer business. With the Biden administration keeping up the pressure on Huawei, billionaire founder Ren Zhengfei has directed the company to grow its roster of enterprise clients in transportation, manufacturing, agriculture and other industries. Huawei is the world’s leading supplier of inverters and it’s now banking on growing those sales alongside its cloud services and data analytics solutions to help the 190,000-employee business survive.

“It’s very unlikely that the U.S. will remove us from the Entity List,” Ren said last month at the opening of a mining innovation laboratory partly sponsored by Huawei. “Right now, we just want to work harder and keep looking for new opportunities to survive.”

Ren said the new initiatives may offset the drop in its handset business “more or less within this year,” though the company declined to provide specific figures. Its consumer unit generated revenue of 256 billion yuan ($39 billion) in the first six months of 2020, more than half of the company’s total. It managed “marginal growth” in sales and profit last year, thanks to record 5G base station orders and strong smartphone sales in the first half.

Huawei has been exploring business opportunities beyond telecom gear and smartphones for years but the efforts took on new urgency after phone shipments tumbled 42% in the final three months of 2020, largely due to a Trump-era order that cut off its ability to obtain the most advanced semiconductors. The Biden administration has also informed some suppliers of tighter conditions on previously approved export licenses, prohibiting items for use in or with 5G devices, according to people familiar with the move.

The U.S. ban has had limited impact on Huawei’s emerging businesses, as most of the components required are available from Chinese suppliers, according to a person directly involved in the initiative. To meet the increasing demand from contractors including Huawei, local suppliers are squeezing better performance from mature technologies that Washington hasn’t banned, the person said, declining to be identified discussing internal matters.

The most advanced chips in Huawei’s inverters, used to convert the electrical output from solar panels, rely on 28-nanometer technology, which Chinese companies are capable of manufacturing. Other components, such as power modules, can be made by 90nm technology or older. Yangzhou Yangjie Electronic Technology Co. and China Resources Microelectronics Ltd. are among the top power diode producers in China.

Each inverter — slightly bigger than an outdoor unit of a central air conditioner — can sell for over 20,000 yuan, more than Huawei’s latest high-end Mate X2 foldable phone. The company is planning to roll out more of its photovoltaic inverters, as Beijing’s push to have carbon emissions in the world’s second-largest economy peak by 2030 drive investments in renewable energy.

Like its solar inverter business, the chips required for Huawei’s automotive systems are less sophisticated than mobile phone processors and can partly be sourced from European suppliers, according to one person familiar with the matter. That’s allowed Huawei to double down on the car industry, moving engineers from other business units to work on sensors for self-driving cars and power units for electric vehicles.

While the company has denied it plans to launch EVs under its own brand, Huawei’s worked with several manufacturers to test its autonomous driving and driver-car interaction technologies. Its entertainment features can be found in Mercedes-Benz sedans and the firm has teamed up with domestic electric automobile makers such as BAIC BluePark New Energy Technology Co. to develop smart car systems. The first model under its partnership with the Chinese EV maker, the Arcfox αS HBT, will be unveiled at Auto Shanghai 2021 in April.

Another initiative dubbed 5GtoB involves Huawei deploying 5G technology to areas ranging from health care to airplane manufacturing. The company has helped China build the world’s largest 5G network, supplying more than half of the 720,000 base stations operating across the nation. Now it’s seeking to use the country’s 5G connectivity to help pandemic-hit businesses automate factory lines — joining fellow tech behemoths such as Xiaomi Corp. and Alibaba Group Holding Ltd. in trying to modernize manufacturing — and digitize once labor-intensive industries like mining.

Huawei has signed over 1,000 5GtoB deals in more than 20 sectors with help from telecom carriers and partners, according to rotating chairman Ken Hu. Online education, entertainment and transportation are among the sectors it plans to explore, he said. The firm in January gave smartphone czar Richard Yu a new role to shepherd its rapidly-growing cloud and AI businesses.

“The adoption of 5G in mining, medical services and manufacturing is getting clearer and some of the applications are being used nationwide,” Liu Liehong, vice-minister for industry and information technology, said at an industry event in Shanghai last month.

A screen shows live video feeds from surveillance cameras at the Xinyuan Coal Mine in Shanxi province. The mine uses technology in mine shafts equipped with a 5G router from Huawei.

Ren is personally leading the expansion into mining, meeting with local officials and inspecting coal pits in Shanxi province. “Most information communications technology companies didn’t think of mining as a field where they can make market breakthroughs, but we did,” the billionaire told reporters last month. “China has around 5,300 coal mines and 2,700 ore mines. If we can serve these 8,000-plus mines well, we could expand our services to mines outside China.”

While Huawei’s betting that inverters, electronic mining solutions and smart car software may compensate for the decline of smartphones, its longer-term future — and its ability to continue powering China’s 5G roll-out — remains clouded. Its HiSilicon subsidiary had been the country’s most capable chipset designer, making the high-end processors that power the company’s smartphones and wireless base stations, before Washington cut off access to the latest chip-design software and contract manufacturers such as Taiwan Semiconductor Manufacturing Co.

For now, the company has told its wireless customers it has enough communications chips to support base station constructions in 2021. But it’s unclear how long those stocks can last, and what options Huawei has once those inventories eventually deplete.

“The ongoing political frictions have cast shadows on the business operations of Huawei and other Chinese firms in the foreseeable future and strategic investment in emerging technologies is key to Huawei’s sustainable business growth,” said Charlie Dai, principal analyst at Forrester Research Inc.