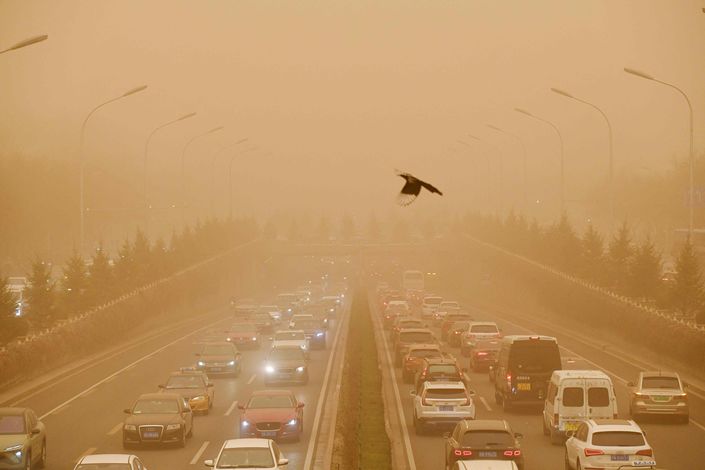 People across northern China awoke to fierce winds and orange-tinted skies Monday as some of the most severe and widespread dust storms for years disrupted transport and sent air pollution soaring.

Weather officials in a string of cities including the capital, Beijing, warned of reduced visibility through Tuesday morning as air quality monitors surged to their maximum possible readings.

The haze was caused by cold air and high winds in China’s arid west and other areas kicking up dust and blowing it across the country, the National Meteorological Center (NMC) said.

Dust storms are uncommon but not unheard of in Beijing, especially in the spring. Monday’s storm followed several days of heavy air pollution in the city of 21 million people.

The agency urged people in the affected areas to close doors and windows, wear masks and veils to stop the dust from damaging eyes and lungs, avoid nonessential driving, secure unstable or temporary construction and cover precision machinery.

Beijing’s environmental monitoring center said the dust originated in southern Mongolia, which borders China. The Mongolian government said six people had died and a further 81 were missing as of 9 a.m. Monday. There have been no reports of deaths or injuries caused by the sandstorm in China.

Average concentrations of airborne PM10, fine particles that can be inhaled into the lungs, neared 10,000 micrograms per cubic meter, 200 times the one-day maximum average recommended by the World Health Organization (WHO). Readings of PM2.5, ultrafine particles that can enter the bloodstream, were around 30 times WHO guidelines.

The picture was similar in other cities. More than 1,000 kilometers (621 miles) west of Beijing, residents of Ningxia’s capital of Yinchuan uploaded videos of the haze-choked city and claimed they could see no more than 500 meters in any direction.

Some internet users poked fun at the weather, joking that the storms provided a readymade sepia-colored filter for their social media photos and comparing the skies with eerie scenes from the “Blade Runner” sci-fi movie franchise.

Peng Yingdeng, a researcher at a national center for studying urban pollution control, said Monday that loose, dry soils in Inner Mongolia and Ningxia, combined with above-average air temperatures, caused winds to kick up dust and disperse it widely.

Although dust storms are natural phenomena, human activity like open-pit mining and deforestation can contribute to their frequency and severity, he said.

However, international organizations including the WHO say both PM 10 and PM 2.5 are linked to increased mortality and heightened risk of respiratory and cardiovascular diseases.

Dust storms are becoming less frequent in Beijing. According to CMS statistics, the city witnessed an average of 4.3 “sandy” days per year between 2008 and 2017, compared with nearly 70 per year in the 1950s.

Officials have sought to clamp down on polluting businesses. Last week, senior staff at four iron and steel mills in Tangshan — a city in Hebei, the province surrounding Beijing — were detained for allowing the companies to break emissions restrictions, the environment ministry said in a Sunday statement (link in Chinese).

Beijing’s air quality has improved in recent years after the government ordered polluting industries out of the capital and enforced stricter emissions controls in the wake of the 2013 “airpocalypse” smog event that resulted in the closure of airports, schools and major roads.

While that episode lingered for more than a week, the NMC forecasts that the current dust storms will gradually shift southward through Tuesday and dissipate amid a blast of northeasterly wind and rain Wednesday and Thursday.