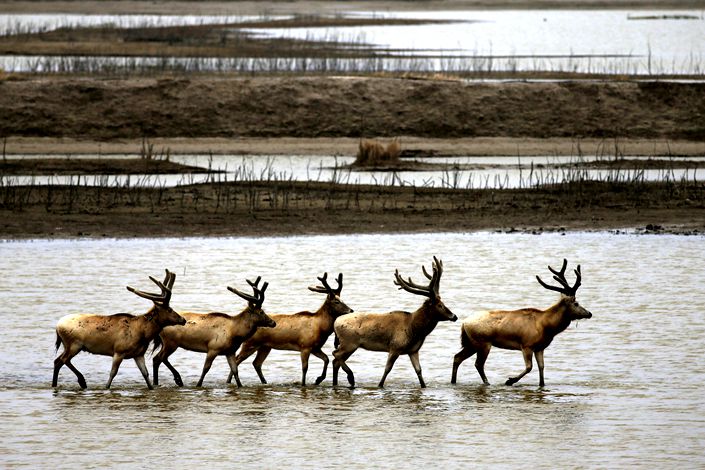 As China’s top leadership convenes the annual “Two Sessions” political meetings this week in Beijing, environmental matters are high on the agenda.

While a specific roadmap toward carbon neutrality remains some way off, China’s rulers have used the Two Sessions to bang the drum for a more environmentally conscious development model, one that chimes with Xi’s vision of “ecological civilization.”

On Friday, Premier Li Keqiang said in his work report that China would aim to further improve its natural environment, slash energy consumption per unit of GDP by about 3%, and continue cutting emissions of major pollutants during the coming year.

The country will draw up an action plan to bring carbon emissions to a peak by 2030, Li said, adding that China would “improve” its industrial structure and energy mix while also pushing to develop new energy sources and nuclear power.

China will “strengthen comprehensive measures and joint efforts” to control air pollution, and bolster coordination on controlling levels of fine airborne particulates and ground-level ozone, both of which pose a threat to human health, Li said.

He added that “clean” heating would account for 70% of all heating in North China by the end of the year, referencing an ongoing effort to rid the vast region of small coal-fired stoves.

The Two Sessions are expected to conclude this week with the ratification of China’s 14th Five-Year Plan, which will shape policy through 2025.

In addition to greenlighting a raft of new policies, conference attendees have submitted an array of policy suggestions to the government. Our previous digests explain how this system works and list suggestions on business, finance, politics and social policy. Below are some of the main suggestions from the environment and climate sectors.

China should take more decisive steps to reduce carbon dioxide emissions from agriculture, according to a recommendation (link in Chinese) by Wang Hongling, a member of the Standing Committee of the Revolutionary Committee of the Chinese Kuomintang, one of the country’s eight legally recognized minor political parties.

Wang says China should seek to quantify its total agricultural emissions, set up national-level leading groups and joint offices to guide reductions alongside rural revitalization, support farmers and businesses in cutting emissions, and establish a rural emissions trading center that would dovetail with its nascent domestic carbon trading scheme.

Food production contributes around one-quarter of total human-caused carbon emissions, according to a 2018 Oxford University study.

China should rapidly move to restrict the amount of antibiotics discharged into rivers and lakes, according to a recommendation by Pan Yuling, a deputy chief of Hunan’s environment bureau.

The country must set standards on antibiotic levels in waste water, improve environmental risk assessments involving antibiotics use, and set upper limits on the maximum amounts of antibiotics that can be discharged, the recommendation said. A similar proposal has been submitted by the Central Committee of the China Association for Promoting Democracy, another minor political party.

China has struggled to rein in rampant use of antibiotics in its sprawling agricultural sector. When they enter the water supply, antibiotics can contribute to antimicrobial resistance, which the World Health Organization has said is one of the most serious threats to human health in the 21st century.

In a separate recommendation, Pan urges the government to better control pollution from aquaculture to improve the ecology of its lakes and rivers. Freshwater farming is a major contributor to water pollution in China because it produces effluent containing toxic substances like phosphorus and ammonium nitrate that can harm aquatic organisms.

China’s central government should partly fund soil rehabilitation in major grain-producing areas affected by heavy metals pollution, according to a proposal (link in Chinese) by Yuan Yanwen, the head of the agriculture bureau of central China’s Hunan province.

Under a plan (link in Chinese) published in June by the State Council, China’s cabinet, the central government only supplies money for environmental cleanup projects that involve radioactive contamination, severe atmospheric pollution or the pollution of major seas and waterways. Soil rehabilitation falls under the purview of local governments.

Soil pollution is a growing concern in China, where decades of industrial growth have left tracts of land in a parlous state. But the national outlook is unclear as the government has not conducted a nationwide soil survey in more than a quarter-century.

China should roll out a range of initiatives to protect aquatic life in the Yangtze River, according to a policy recommendation by Xu Xudong, a researcher at the Institute of Hydrobiology under the Chinese Academy of Sciences.

The country should establish archives, better protect and restore fish habitats, connect water reservoirs, meet ecological water demand in mid- and downstream areas, and trial the seasonal opening of sluice gates to let water flow more freely between the river and its lakes, according to the recommendation (link in Chinese).

Long stretches of Asia’s longest river have declined dramatically due to urbanization, industrial development and dam construction. A 10 -year ban on fishing in the Yangtze took effect in January.

China should revise flood control plans for the Yangtze River in order to avoid a repeat of the devastating deluges that struck the region last summer, according to a recommendation by Zhong Zhiyu, chief engineer at the Yangtze Water Resources Commission.

He encourages (link in Chinese) the government to make adjustments to the complex flood prevention, flood storage and early-warning systems used along the river, whose basin is home to around one-third of China’s population and generates about 40% of its GDP, according to the World Resources Institute.

Read more of Caixin’s coverage of the Two Sessions 2021.