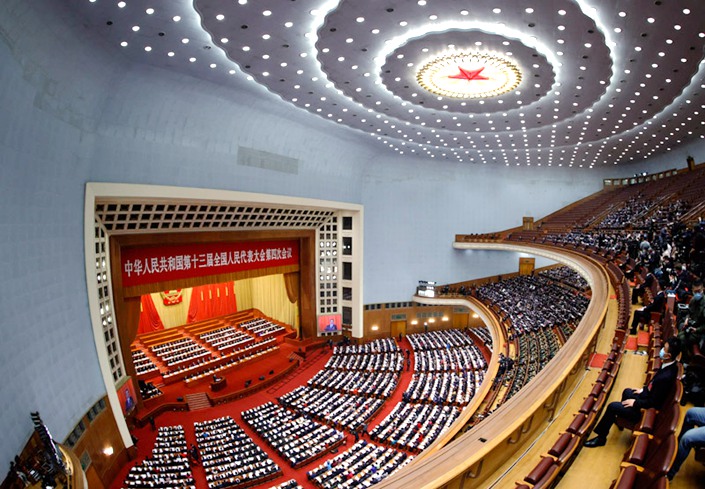 The fourth session of the 13th National People’s Congress opened Friday at the Great Hall of the People in Beijing. Photo: Xinhua

China will speed up legislation on foreign sanctions and interference during the next year, the head of the country’s top lawmaking body said Monday in a speech that also stressed Beijing’s commitment to quelling social unrest in Hong Kong.

Beijing would “enrich its legal toolbox for responding to challenges and guarding against risks, while pushing for the formation of comprehensive legal and regulatory systems on foreign affairs,” he said.

Despite not mentioning the United States, the speech is likely a pointed rebuke to Washington. Relations between the world’s two largest economies have withered dramatically since 2018 after the U.S. imposed tariffs and trade barriers on certain Chinese goods.

The two sides have also clashed over China’s handling of the Covid-19 pandemic, its crackdown on pro-democracy protests in Hong Kong and alleged rights abuses in Northwest China’s Xinjiang Uygur autonomous region, which Beijing denies.

China’s government is expected to ratify changes to Hong Kong’s election laws this week that would give Beijing more control over the semiautonomous territory’s political system.

China’s top leadership is convening the “Two Sessions” annual political meetings in Beijing and is expected to ratify the country’s 14th Five-Year Plan later this week.

Attendees have submitted a flurry of policy suggestions to the government, which typically responds to them within a few months. Our previous digest explains the role of this system and outlines several economics and finance proposals. Here’s a roundup of some of the other recommendations.

China should standardize the collection and disclosure of personal information during epidemiological investigations relating to the Covid-19 pandemic, according to a suggestion (link in Chinese) by NPC deputy Cai Weiping, chief doctor of the infectious diseases center at Guangzhou No. 8 People’s Hospital in South China’s Guangdong province.

The recommendation seeks to strike a balance between collecting adequate data about each new Covid-19 case and preventing authorities from publicizing personal information that can have an adverse impact on people’s lives. Currently, local governments are responsible for deciding how much case data they release to the public.

In December, authorities in the southwestern city of Chengdu published the movements of a Covid-19 patient surnamed Zhao who had visited several bars in the two weeks prior to developing symptoms. After Zhao’s home address, phone number and identity card number were posted online, she received a barrage of social media harassment, raising questions over how members of the public were able to trace her identity from the government case data.

China’s government needs to make a slew of regulatory changes to its nascent carbon market so that it can operate as intended, according to a suggestion (link in Chinese) by NPC deputy Wu Xiwei, executive director of state-owned oil giant Sinopec Corp.

Domestic carbon trading is seen as a crucial medium-term strategy to cut China’s greenhouse gas emissions ahead of its 2060 carbon neutrality pledge. Wu’s recommendation lacks specific steps to improve the market, but summarizes a litany of well-worn problems, including a lack of uniform emissions quotas, compliance mechanisms, and storage and offset mechanisms in pilot projects, as well as excessive government intervention.

NPC deputy Yan Zhi has submitted a proposal that China should increase the minimum penalty for child trafficking to 10 years in jail, according to state media reports.

Under China’s Criminal Law, those found guilty of child trafficking face between five and 10 years behind bars. Yan also proposes collecting fingerprints and blood samples from children when registering their identities in a “national online population database.”

China is a major country of origin, destination and transit for illegally trafficked people.