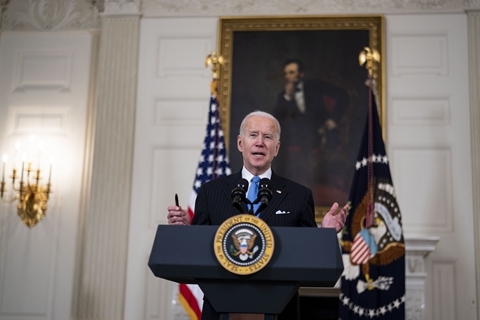 U.S. President Joe Biden set the country’s broad national security priorities this week, with a strong focus on China that included investing in American competitiveness and strengthening alliances, just as Beijing pledged to pour money into research on technologies such as semiconductors and AI.

The White House on Wednesday released its interim national security strategic guidance, which was read closely for signs of how the administration will engage with the world. It mentioned China and its metonyms more than 20 times — double as many as any other foreign country — and warned of the Asian nation’s growing assertiveness.

“(China) is the only competitor potentially capable of combining its economic, diplomatic, military, and technological power to mount a sustained challenge to a stable and open international system,” the paper said.

In a video message timed to coincide with the release, U.S. Secretary of State Antony Blinken characterized U.S. dealings with China as the defining test of the century, and said his nation’s approach would be “competitive when it should be, collaborative when it can be and adversarial when it must be.”

The paper, with a preamble signed by the U.S. president, said the world’s leading powers are “racing to develop and deploy emerging technologies, such as artificial intelligence and quantum computing, that could shape everything from the economic and military balance among states to the future of work, wealth, and inequality within them.”

It said the U.S. must “reinvest in retaining our scientific and technological edge and once again lead, working alongside our partners to establish the new rules and practices that will allow us to seize the opportunities that advances in technology present.”

A separate report released Monday by the U.S. National Security Commission on Artificial Intelligence (NSCAI) also focused on China, saying: “China possesses the might, talent, and ambition to surpass the United States as the world’s leader in AI in the next decade if current trends do not change.” It was the final report from the ad hoc body, which was formed in 2018 to make recommendations to the White House and Congress.

For the first time since World War II, America’s technological supremacy — the backbone of its economic and military power — is under threat, the commission found. It said that by 2025, the U.S. Department of Defense and its intelligence community must be “AI-ready.”

Specifically, the NSCAI said that the U.S. supply chain for advanced semiconductors is at risk without concerted government action, and that rebuilding domestic chip manufacturing will be expensive, but it must act now.

Talent-wise, the NSCAI recommended that the U.S. government streamline the hiring process and expand digital talent pipelines, and said it needs to establish a new service academy to train future civil servants in the digital skills that are needed to modernize the government.

Meanwhile in Beijing, Chinese policymakers were laying out their own plans for technological self-sufficiency when they met this week at the annual Two Sessions. China pledged to spend more on research into core technologies such as chips and AI in the coming five years, in a bid to achieve self-reliance.

Chinese Premier Li Keqiang said in his keynote government work report Friday that the country will increase R&D spending by more than 7% per year, which is “expected to account for a higher percentage of GDP” than that during the previous five years.

Chinese Foreign Minister Wang Yi said last month at a forum in Beijing that China and the U.S. should work together to reopen a dialogue and “build up goodwill” to repair the damaged relationship.

China would like the U.S. to remove tariffs and sanctions on companies and “abandon irrational suppression of China’s technological progress,” Wang said.

But there was little sign of a softer approach from incoming U.S. Secretary of Commerce Gina Raimondo, who stood by the department’s blacklist in an interview with MSNBC Thursday.

“The entity list is a powerful tool,” she said. “Chinese telecommunications companies are a threat to American economic and national security. We’re going to use [the list] to its full effect.”