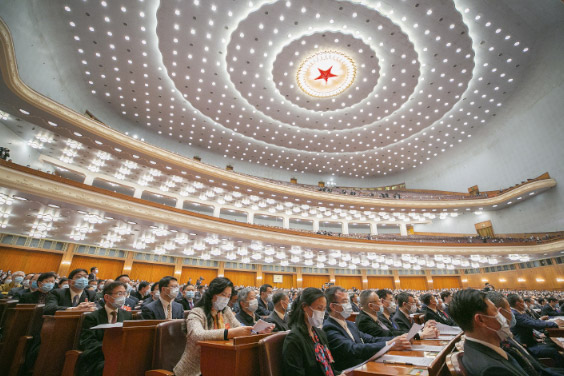 The fourth session of the 13th CPPCC National Committee opened Thursday at the Great Hall of the People in Beijing. Photo: VCG

As China’s top leadership convenes major political meetings known as the “Two Sessions” in Beijing this week, observers have been training their sights on two key documents.

The first was Friday’s annual government work report, which reviewed the government’s performance in 2020 and sets aims for 2021. In his headline speech, Premier Li Keqiang announced a modest GDP target of above 6%, a raft of policies to take financial pressure off pandemic-squeezed businesses, and pledges to reform the energy, transportation and telecommunications sectors.

Meanwhile, the 14th Five-Year Plan, which is expected to be released next week, will reveal the government’s vision for development through 2025 and beyond, likely focusing on the post-pandemic economic recovery, technological self-reliance and President Xi Jinping’s bold carbon neutrality pledge.

In general, individual suggestions are unlikely to result in legal changes at the current meetings. They will be forwarded to government agencies, which typically respond within a few months. Although the suggestions will probably not translate into concrete policy in the near term, those that are made public may presage changes further down the line and animate public debate on important topics like food security, cybersecurity and trust law.

Here’s Caixin’s rundown of some of the main business and finance proposals at this year’s Two Sessions.

Getting piggy with it

China should set up a government-subsidized pig breeding program and encourage companies to take part, according to a recommendation (link in Chinese) by CPPCC member Liu Yonghao, the founder and chairman of domestic agribusiness giant New Hope Group.

Under the recommendation, companies would first “actively invest” in breeding research, basic infrastructure, recruitment and international cooperation, while the government would pay half the total costs. Liu argues the mechanism would “guarantee the authenticity, timeliness and effectiveness of research” and promote the “positive development” of China’s hog sector.

In a separate recommendation (link in Chinese), Liu urges the government to modernize the industry in order to avoid fluctuations in the price of China’s most popular meat.

The suggestions aim to make China’s pork industry more resilient to shocks like African swine fever, a hemorrhagic disease that killed millions of animals in 2018. They come amid a wider debate on food security, which has seen some officials make tentative murmurings in favor of controversial genetic modification technologies.

Zhou Hongyi, the founder of 360 Security Technology Inc. (SH:601360), has reportedly recommended to the CPPCC that China take steps to recognize hackers as “special talents” in order to prevent them from using their skills illegally.

The suggestion urges the government to identify and incentivize specific talent in the cybersecurity industry, “raise understanding and recognition of this group in society, and strengthen their feeling of approval toward the nation,” according to state media.

Liu and Zhou are far from the only business leaders to have pitched ideas to the government.

Lei Jun, an NPC deputy and the head of home electronics giant Xiaomi Corp., has proposed incorporating “digitized services for the elderly” into China’s data infrastructure and formulating standardized systems for making smart technologies accessible to seniors, according to domestic media reports.

China should amend its Trust Law to better regulate the obligations of trustees and establish supporting infrastructure for family trusts, in order to boost the smooth transfer of private wealth and guard against losses during inheritance procedures, according to a planned recommendation by Xiao Gang, a CPPCC member and former head of the China Securities Regulatory Commission (CSRC).

The country should consider setting up nontransaction transfer systems for trust property, a trust registration system and a trust tax system, the recommendation said.

China has around 32 million private companies, fueling strong demand for family trusts, according to Xiao. As of June, China had some 9,049 family trusts holding a total property value of 186 billion yuan ($28.7 billion), official data show.

China should draw up new regulations on managing corporate bonds to address diffuse government supervision over its bond market, according to a planned proposal (link in Chinese) by NPC deputy Liu Xinhua, a former vice chairman of the CSRC.

Chinese officials view rising bond defaults as a potential systemic risk in the absence of a unified regulatory mechanism. Currently, the CSRC, the National Development and Reform Commission and the People’s Bank of China regulate different types of bonds.

“The formulation of (these regulations) is an inevitable requirement for unifying standards for bond market regulation,” he said.