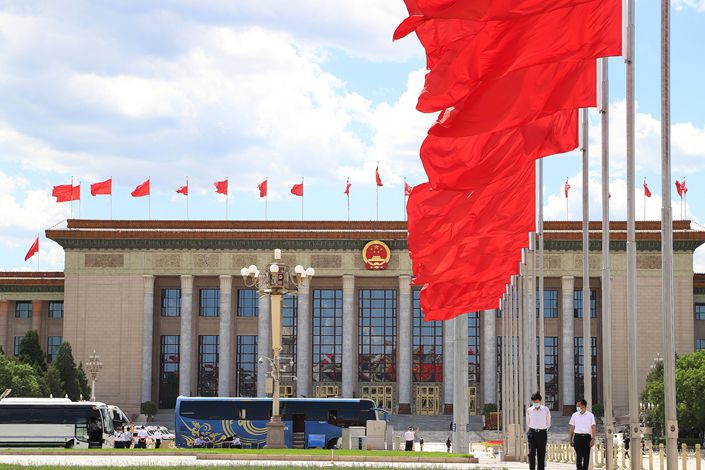 Chinese lawmakers will congregate in Beijing later this week to review a key national plan that will guide policy through the next five years and beyond.

Officials from across the country will descend on the Great Hall of the People, a vast state palace on the western side of Tiananmen Square, to attend the annual political meetings known as the “Two Sessions.”

The term refers to the gatherings of the National People’s Congress, China’s legislature, which begins Friday; and the Chinese People’s Political Consultative Conference (CPPCC), which starts Thursday.

The Two Sessions will conclude next week with the expected ratification of China’s 14th Five-Year Plan, which will run through 2025, as well as the approval of more distant national goals for 2035. But the meetings are also an opportunity for senior officials to reflect on the government’s recent work and address initiatives for the year ahead.

Much of the initial pageantry is likely to focus on President Xi Jinping’s poverty alleviation campaign, which he concluded last week by declaring “total victory” over extreme want.

The proclamation means that Xi’s administration has achieved the first of China’s so-called centennial goals, which aimed to build a “moderately prosperous,” or “xiaokang,” society in time for the 100th anniversary of the Communist Party’s founding in 2021. It also implies that the new five-year plan may to pivot toward the second such goal, building a “modern socialist country” in time for the centenary of the founding of the People’s Republic in 2049.

This year’s Two Sessions come at a delicate moment in China’s development. Policymakers are expected to focus on consolidating the country’s recovery from the economic impact of the Covid-19 pandemic, building technological self-reliance amid testy relations with the United States, and addressing Xi’s ambitious pledge to decarbonize the economy.

Recent statements by senior government figures indicate that the next five-year plan is likely to formalize a strategy called “dual circulation,” which aims to boost the share of domestic consumption in China’s historically export-led economy.

At a meeting Friday to discuss the draft plan, members of China’s Politburo, a group of 25 top Communist Party members headed by Xi, urged “unremitting efforts” to establish a “new development paradigm” around dual circulation, according to a report by the state-run Xinhua News Agency.

As China’s economy continues to bounce back from the Covid-19 pandemic, officials have also hinted they intend to maintain a steady hand on the tiller in the short term instead of embracing large-scale stimulus measures.

Economic bigwigs have repeated a mantra of “no sharp turns” (link in Chinese) in policy and underscored the need to maintain “continuity, stability (and) sustainability” through 2021 through “proactive” and “prudent” fiscal and monetary policy.

The more modest aims for this year were evident at Friday’s Politburo meeting, when members said China should aim to “keep the economy running within a reasonable range,” according to Xinhua.

But in the years to come, China is likely to adopt new reforms to boost domestic consumption, said Yang Weimin, the deputy chief of the CPPCC’s Economics Commission, in an exclusive interview (link in Chinese) with Caixin on Tuesday.

The reforms could include granting more rural-born migrant workers the right to settle in cities, improving the domestic supply of consumer goods, and boosting the share of tourism and cultural goods in the economy, Yang said.

Overall, the new five-year plan targets the “balanced development” of financial services, real estate and the real economy, while also aiming to keep the share of manufacturing in China’s economy “basically stable,” he said.

In an analysis last month, Pang Ming, head of macro and strategic research at China Renaissance Securities in Hong Kong, wrote (link in Chinese) that the plan would continue to focus heavily on employment, rural income growth and social security improvements during the next five-year plan.

The Politburo stressed the need to strengthen the “strategic support of science and technology” over the coming year and beyond, according to Xinhua, a statement in tune with a recent flurry of official pronouncements describing China’s “external environment” (link in Chinese) as increasingly complex and uncertain.

The plan is also likely to outline China’s early steps toward its stated goal of bringing carbon dioxide emissions to a peak before 2030 and reducing them to net zero by 2060, a bold pledge made by Xi in September.