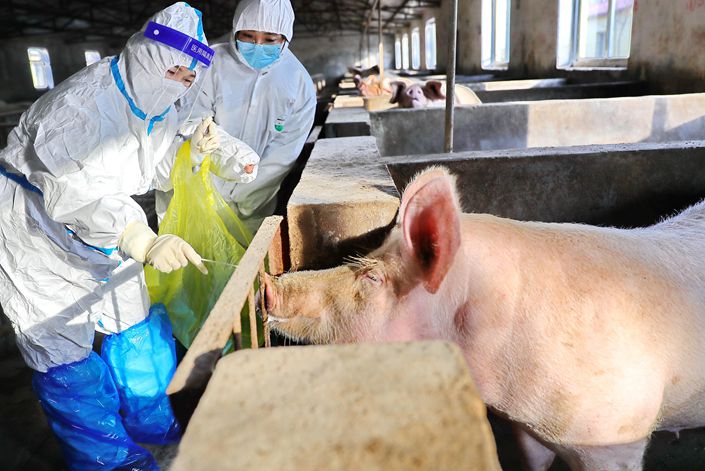 Chinese scientists have discovered a milder but harder-to-detect mutation of the African swine fever virus has been spreading in China, posing new challenges to the prevention and control of the highly infectious disease which swept the country in 2018.

Compared to pigs infected with classic African swine fever, animals infected with the new strains experience a longer period of disease, milder symptoms and ones which are more easily misdiagnosed. Failure to diagnose contaminated pigs at an early stage can lead to mass infection in farms and irrecoverable loss, multiple pig farming industry insiders said.

With milder clinical symptoms, the new strains are more difficult to detect in livestock while remaining highly transmissible, making early diagnosis more challenging, they said. While not dangerous to humans, the disease can cause up to 100% fatality in pigs, leading to severe economic losses to the pig sector.

China consumes more than half of the world's pork production. An estimated 30% of Chinese pork production is by small-scale farmers who may lack the expertise or funds to protect their animals from the disease, according to health experts.

There are no commercialized vaccines or specialized treatment for the virus. Controlling the pandemic relies on swift diagnosis and extermination of infected animals. A swine fever virus vaccine developed by the Harbin Veterinary Institute is currently in its second stage of clinal trials.

Multiple industry professionals told Caixin, speaking on condition of anonymity, that although there is no approved vaccine to date, many pig farms have used “underground vaccines” from unknown sources to mitigate losses. Professionals worry that these unregulated vaccines may cause the virus to mutate, thereby exacerbating the crisis.

The Harbin institute’s researchers found two less lethal strains of the virus in 3,660 samples taken from pigs in seven provinces between June and December 2020, the report said. The strains showed mutation of the EP402R gene, one of the genes considered to control virulence.

Worries over virus mutation have long been present in the pig farming industry. Pig farming industry insiders from various companies and organizations have reported finding pigs infected with a mild version of the swine fever since 2019.

Experts say that the situation merits concern. Yaosheng Chen, a professor of life sciences at Sun Yat-sen University recently wrote in a published article that mutated African Swine Fever virus released onto farms have become a new and significant source of contamination and infection in China, greatly complicating virus control.

A 2018 outbreak of African swine fever caused the death of more than 10% of pig livestock in China, Mongolia and Vietnam, according to 2019 report by the United Nation's Food and Agriculture Organization.

A pig farming expert said he believed the industry had shown a good grasp of prevention and control measures for the virus in recent years. But the emergence of less virulent strains is a new problem the industry must now face, the expert conceded.

The Chinese government has repeatedly called for a crackdown on illegal vaccine usage. Following publication of the academic report, the Ministry of Agriculture and Rural Affairs on Feb. 25 vowed to “crackdown on illegally producing, selling and using African swine fever virus vaccines” during a meeting of national animal epidemic prevention.