Two Sessions: What to Watch for at China’s Biggest Political Meetings of 2021 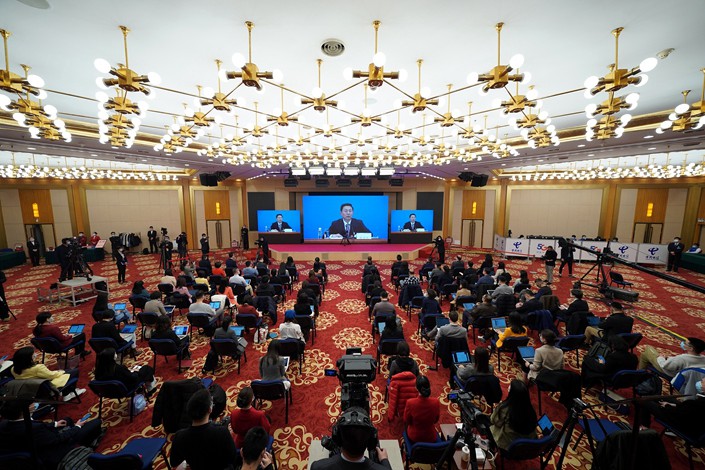 The Chinese government didn’t set a GDP target last year and there’s a chance it could drop it again this year because of the pandemic’s effect on growth. Photo: VCG

China’s annual gathering of the National People’s Congress (NPC) kicks off tomorrow in Beijing. For the second straight year, it will be a mostly virtual event because of Covid-19 — absent will be the usual throng of journalists from around the globe mingling with the officials that oversee the world’s second-largest economy.

As usual, the meeting will run concurrently with a gathering of China’s top political advisory body, the Chinese People’s Political Consultative Conference (CPPCC), a broad group that includes independent members (tech entrepreneurs were invited to 2018’s meeting) and political party delegates. Together, the conferences are commonly known as the Lianghui (两会), or “Two Sessions.”

The outlook for the economy, the pursuit of technological self-reliance, and continuance of reform and opening-up will be under discussion at the events.

What’s on the agenda?

National lawmakers will consider a central government work report, national and regional budget plans, as well as the 14th Five-Year Plan, a high-level policy blueprint for national economic and social development over the next five years, and long-range objectives through 2035.

The 14th Five-Year Plan is expected to urge acceleration of the establishment of a new development paradigm, known as “dual circulation,” with domestic circulation as the mainstay and domestic and international circulations reinforcing each other.

The plan would also adhere to the strategy of expanding domestic demand, boosting support for science and technology, securing the supply chain, expanding high-level opening-up, and maintaining social stability.

The NPC session will deliberate a draft decision on improving the electoral system of the Hong Kong Special Administrative Region. It will also mull over draft amendments to the NPC organic law and rules of procedures, proposed by the NPC Standing Committee.

According to HSBC Global Research, China watchers should pay attention to three key aspects, including the Government Work Report, which will set the key policy and reform agenda for 2021, the Fiscal Budget Report, which will give more details about the pace of policy normalization, and the full text of the 14th Five-Year Plan.

Some 3,000 members of the NPC are expected to attend. They will include President Xi Jinping and his six fellow members of the Communist Party’s Politburo Standing Committee. Also participating will be other Communist Party and government leaders, company executives and military commanders.

While some Chinese and foreign journalists based in Beijing will attend, there will be none from abroad. News conferences, briefings and other interviews will be conducted through alternative methods, such as video links. Foreign envoys will be invited to observe plenary meetings, and some reporters will be allowed to cover them in the Great Hall of the People, the NPC’s traditional focal point.

Chinese Premier Li Keqiang and Foreign Minister Wang Yi will hold the two key press conferences that will attract the most public attention during the Two Sessions.

What about the economy?

The Chinese government didn’t set a GDP target last year and there’s a chance it could drop it again this year because of the pandemic’s effect on growth. Nomura Securities expects Beijing to resume setting a growth target next year, somewhere between 5% and 6%, which is around the current potential growth rate.

With the economic recovery likely to continue from the second quarter thanks to the rapid containment of the latest wave of Covid-19, the distortion from the base effects is likely to almost disappear in 2022, Nomura Securities said in a research paper.

Economists expect China’s GDP to expand 8.4% in 2021, and most provinces have set a target of at least 6% for this year. In the longer term, Beijing’s goal of doubling the economy by 2035 requires growth a little slower than 5% annually.

For 2021, authorities have signaled they want to scale back the stimulus pumped into the economy last year and curb debt.

The NPC will also approve the full 14th Five-Year Plan outline, push for further reform and opening, and highlight technology innovation and greener development as future goals, Wang wrote in a Caixin column.