Wang Tao: What Economic Agenda Will the Two Sessions Set? 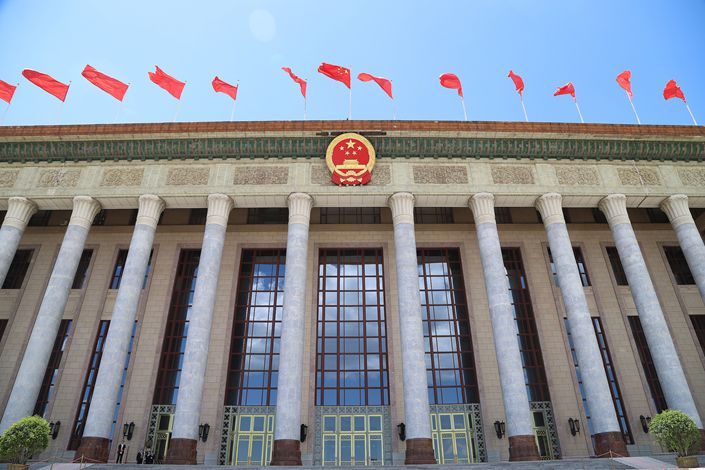 China will hold its annual National People’s Congress (NPC) meeting starting on March 5. The NPC meeting will unveil China’s key economic targets and policies for 2021. We expect the meeting will largely follow the guidelines of the 5th Plenum and policy directions outlined in December’s Central Economic Work Conference (CEWC). With growth set to recover strongly this year, we expect the NPC to shift focus towards risk and leverage control, announcing a smaller fiscal deficit and more prudent monetary policy stance. The NPC will also approve the full 14th Five-Year Plan (FYP) outline, push for further reform and opening, and highlight technology innovation and greener development as future goals. In particular, we expect:

No specific growth target or a minimum target for 2021

With China’s growth expected to recover strongly this year from the post-Covid shock and low base last year (UBS estimates 8.2%), we believe the government will either not set a specific growth target for 2021 or set a minimum growth target (for example, at least 6%) to allow for a substantial upside to avoid sending the wrong signal.

If the authorities set the growth target at 8% to 9%, which is what most economists predict China can achieve this year, some local governments and firms may interpret this as a sign of continuing or strong supportive policies. If the target is set at 6% only, however, the market may take this as a signal for significant policy tightening. In addition, the remaining uncertainty related to the pandemic and global recovery will also make it difficult to target a precise growth rate this year. For the 14th FYP, we expect the government to set a growth target in the 5% range and emphasize the sustainability and quality of growth.

The Feb. 26 Politburo meeting said that China should pursue a “proactive” and “more sustainable” fiscal policy. We expect the 2021 headline budget deficit to drop to 3% of GDP or lower, from 3.7% in 2020. We expect the broad augmented fiscal deficit (AFD) to shrink by 3% of GDP after expanding by an estimated 4 percentage points last year, with no special treasuries — 1 trillion yuan ($154 billion) in 2020 — and smaller local government special bonds (down from 3.75 trillion yuan to 3 trillion yuan), and most 2020 tax and fee cuts expiring.

Although the government may extend some tax and fee cuts and announce some new tax cuts, especially with regard to small and mid-sized enterprises, we expect the overall cuts will be far less than the expired cuts from last year. Our AFD covers the budget deficit, land revenue-financed spending, infrastructure-related local government financing vehicle debt increase and other quasi-fiscal spending increases. The reduced fiscal support should lead to lower infrastructure investment growth (from 3.4% to around 2%) this year, though “new” infrastructure including renewable energy, 5G and other digital infrastructure, and public transport systems should continue to grow more rapidly.

Echoing the CEWC and Politburo meeting, the government is likely to reiterate a “prudent” monetary policy stance while requiring policy to be “flexible” and “appropriate.” The latter wording and the earlier assurance from the PBOC mean that the central bank aims to adjust the pace of policy normalization according to economic development and market conditions, taking into account pandemic related uncertainty and any credit market and rates volatility. While we expect 2021 CPI inflation to average under 2%, below the likely target of “about 3%,” we think the considerations of containing macro leverage and risk are the most important one in the government’s plan to normalize policies.

We think this will be achieved mainly through reduced liquidity offering, tighter macro prudential rules, lower government bond issuance and continued control of shadow credit. We forecast only a 5 base point rate hike of repo and MLF rates later in the fall, though the PBOC may raise rate more if recovery is stronger than we currently expect and higher U.S. yields support the dollar.

In addition, the government may reiterate its tightening tone on property-related credit, under-regulated online lending, and regarding the anti-monopoly campaign for platform-type internet giants. To help reduce the potential negative impact of policy normalization, we think the government may extend some supportive financial policies to SMEs to prevent a sudden credit crunch for these companies.

Given that China has faced tech restrictions and “decoupling” pressures, we think a key part of the new development strategy is fostering innovation and building a domestic supply chain that is less vulnerable to foreign supply chain disruptions.

Such policies should include removal of administrative restrictions and red tape on releasing domestic demand, mixed ownership reform to increase SOE efficiency, policies to support private sector and services sector development, reforms of land policy and the “hukou system,” and improvements to the social safety net and public services.

We also expect the government to pursue further market opening to help attract foreign investment, deter pressure to shift supply chains away from China, and eventually enhance the competitiveness of Chinese companies. In addition, the NPC meeting and new five-year plan are likely to unveil the key targets and roadmap for controlling carbon emission and supporting non-fossil energy development, as the first concrete step to achieve China’s ambitious goal of “carbon neutrality” by 2060 and peaking carbon emissions by 2030.