Wang Tao: Holiday Travel Restrictions Could Be a Boon to the Economy 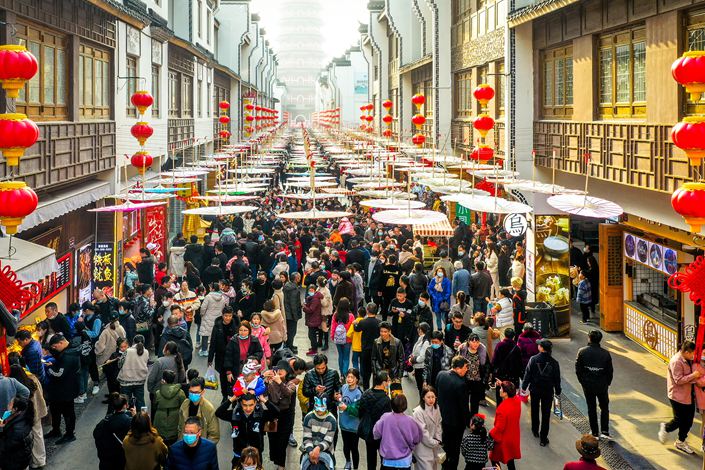 In an effort to contain a resurgence of Covid cases, China tightened travel restrictions around the Lunar New Year, in particular to discourage traveling during the “Chunyun” (春运), the period around the holiday that is considered a peak domestic travel season. Some local governments and large state-owned enterprises rolled out further restrictions. We published a note earlier anticipating the impact of such moves on the economy. Now China is back to work, how did daily activities fare during the holiday period? And how might this influence the pace of policy normalization?

Chunyun holiday travel declined sharply. Total passenger volume declined by 76% between Jan. 28, the first day of Chunyun, and Feb. 20, compared with the same Lunar New Year period in 2019, according to official data release from the Ministry of Transportation. It was down 67% compared with the travel rush period in 2020.

The drop far exceeded the ministry’s earlier prediction, made around Jan. 20, of a 40% decline of Chunyun travel from 2019, suggesting significant negative impact of the “staying put” policy.

Local movement intensity remained robust. Our People Movement Index is compiled by UBS Evidence Lab based on Baidu’s Qianxi model, covering travel between cities and regions and movements within a locality in 367 cities and 27 provinces on the Chinese mainland.

The Baidu Qianxi index shows local movement intensity from Feb. 11 to Feb. 17 was on average about 13% higher than 2019 level and 55% higher than 2020. Urban traffic congestion index also showed that traffic in 100 cities was only modestly less congested on average than in previous post-Lunar New Year periods, but significantly more congested than in 2020. Both sets of figures shows that local traffic and travel activities stayed largely normal compared with Lunar New Year holidays before 2020.

Stronger property sales and normal operating rates at steel mills. Consistent with the resilient local movements and in contrast to the much lighter travel activity, property sales in 30 cities have stayed about 30% higher during the past three weeks than during the previous Lunar New Year.

In particular, property sales were 24% higher in the two weeks before the holiday and 33% higher during the week following the Lunar New Year, thanks to resilient underlying sentiment. Meanwhile, operating rates of both blast furnaces and electric arc furnaces are largely on par with previous years, indicating very limited impact of recent mobility restrictions on steel production. In addition, steel prices have stayed elevated recently thanks to resilient demand.

Sales of food deliveries and ready-to-eat dishes were particularly strong. Overall home appliance demand was strong, with 30% year-on-year sales growth for key appliance retailers, according to the ministry.

However, growth of overall retail sales may be less robust than those reported for “major” companies, as small retailers and catering businesses in lower-tier cities and rural areas may be affected more negatively by the “staying put” policy, with fewer people returning from large cities during the holiday.

The reduction in cross-regional travel has hit travel and tourism. Based on the 13 provinces that have made data available so far, Lunar New Year tourism revenue declined by 37% from 2019, although it is likely higher than 2020 levels due to a low base. While trips to the outskirts of localities reportedly surged, these kinds of journeys tend to be shorter and less expensive, so they are not enough to make up for the shortfall of cross-regional travel.

Meanwhile, intracity consumption, including online sales and movie ticket sales, were well supported. Alibaba Group Holding Ltd. reported that express shipments of its online Lunar New Year sales promotion from Feb. 4 to Feb. 15 were four times of those in 2019, while the State Post Bureau reported that package shipments during the week following the Lunar New Year were 3.6 times that of the 2020 period. Total box office sales for the week following the Lunar New Year reached 7.8 billion yuan, a record high, and 32% more than in 2019, partly because the average ticket price was 8% higher.

Industrial and construction activities will likely be stronger than normal. The travel statistics show that significantly fewer migrant workers returned home during the holiday period. This will likely mean a somewhat higher capacity utilization ratio than normal during the holiday, and faster resumption of work after the holiday, leading to more effective working days. Of course, the actual strength of industrial production, export and construction activities will likely also be determined by orders and seasonal weather conditions. High frequency data show that the average operating rate of steel furnaces in the first week after the Lunar New Year this year has stayed largely on par with those of 2019 and 2020, and slightly higher than that of the last month before the holiday.

We think the impact of the “staying put” policy on first quarter GDP may be at the lower end of our earlier estimate of 0.5 to 1 percentage point, based on the latest data on activities and Covid-19 cases. With the low base of the first quarter of 2020 (especially for the January to February period) and as mobility restrictions are set to be relaxed soon, we are confident that first quarter GDP growth will exceed 18% year-on-year. With the chance of a $1.9 trillion U.S. fiscal stimulus increasing, which will likely lead to a stronger U.S. and global recovery, our current full-year 2021 GDP growth forecast of 8.2% has more upside risk.

The People’s Bank of China (PBOC) may resume policy normalization earlier than expected. The central bank injected far less liquidity into the financial system in the days before the 2021 Lunar New Year than in previous years, which contributed to the spike in short-term rates at the end of January, as the market worried about a more hawkish monetary stance. However, rates have fallen since immediately before the holiday, as it became apparent that the demand for liquidity during the holiday period was lower than normal.

The PBOC attributed this to the “staying-put” policy that substantially reduced cash demand at both the corporate and household levels. Echoing this, market rates continued to drop after the holiday even as the PBOC started to withdraw liquidity from the market. Looking back at the past two weeks, the number of Covid-19 cases came down sharply in China during the holiday period and economic activity generally seemed to stay resilient except for travel and related services.

As such, we expect the PBOC to resume policy normalization soon, likely earlier than expected before the holiday, when outlook about domestic and external pandemic development looked more uncertain. We still see normalization being mainly carried out through reduced liquidity offering, instead of rate hikes, with credit growth slowing further, helped by fading fiscal support and tighter macro prudential measures.