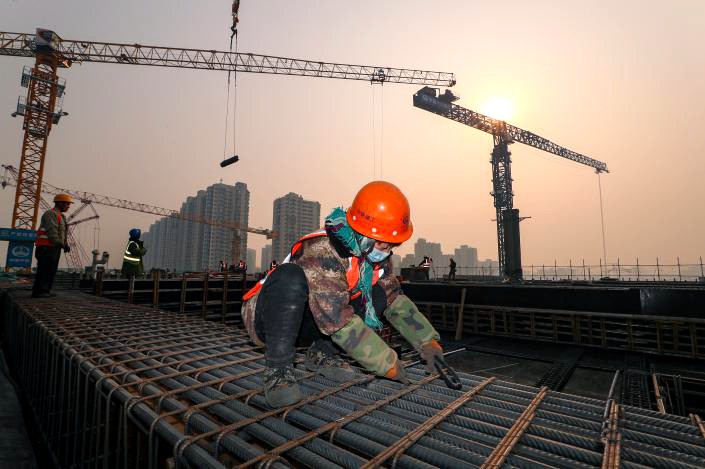 China set a prudent GDP growth target of “above 6%” for 2021, in line with our expectations. The 2021 Government Work Report cited considerable pandemic uncertainty and the desire to focus the work on high-quality development and reform (as opposed to just GDP growth) in setting this modest target. This is also likely why the 14th Five-Year Plan (FYP) has no average growth target while an annual growth target will be set based on the circumstances of each year.

Lest the 6% target is misunderstood as a signal of significant policy tightening, the report also laid out a minimum employment target (new urban employment above 11 million) and a more accommodative policy stance than expected. Specifically, the planned cut in the headline figures for the budget deficit and local government special bonds issuance were less than expected. In addition, the wording for the property sector seemed relatively neutral, and more credit support to the corporate sector, especially small and midsize enterprises (SMEs), was called for. Given the less hawkish policy tone and the likely passage of a larger U.S. stimulus, we now see more upside risk to our baseline 2021 GDP growth forecast of 8.2%.

The report said macro policies need to remain supportive for “market entities” and not to “turn sharply,” though it did say policies should be adjusted according to development. Echoing this, the government will extend or grant some new tax cuts and debt service moratorium for small and micro businesses, and asked banks to further increase lending to SMEs. The report pledged more measures in the “employment first” policy, including support for companies with no or limited layoffs, funding help for vocational training, and assistance with social security contributions.

There were smaller cuts in headline budget deficit and special local government bonds. As outlined in the Central Economic Work Conference and recent Politburo meetings, the report called for a “proactive” and “more sustainable” fiscal policy with “proper” support measures. The government announced a headline general budget deficit of 3.2% of GDP from 3.7% in 2020, smaller than the 3% we had expected, and no issuance of special treasury bonds.

Most of tax and fee cuts in 2020 expired, with new targeted cuts announced

China cut taxes and fees by over 2.6 trillion yuan in 2020, according to the government, of which around 1.7 trillion from corporate social insurance contribution. Most of latter expired at the end of 2020, especially that for basic pension. Meanwhile, the government announced an extension of some targeted tax cuts from last year and new cuts to the value-added tax for small taxpayers, income tax for SMEs and individual businesses, cost on R&D-related capital expenditures, power tariffs for the industrial and commercial sectors and internet fees. We estimate that total tax and fee cuts in 2021 would be considerably lower than in 2020. Nevertheless, the negative impact of reduced tax and fee cuts should be limited, as the multiplier effect of such cuts is likely low.

We estimate that the broad augmented fiscal deficit (AFD) may shrink by 2% to 2.5% of GDP after expanding by over 4 percentage points last year, again less than we had expected earlier. Note that the AFD measure covers the budget deficit, land revenue-financed spending, growth in infrastructure-related Local Government Financial Vehicles (LGFV) debt and other quasi-fiscal spending increases. The reduced fiscal support should lead to lower infrastructure investment growth (from 3.4% to around 2%) this year — though “new” infrastructure, which includes renewable energy, 5G and other digital infrastructure, and key projects highlighted in the new five-year plan, such as public transportation, energy and water projects — should grow more rapidly.

As expected, the report reiterated a “prudent” monetary policy stance while requiring the policy to be “flexible” and “appropriate” to balance the need to support growth recovery and prevent risks. The latter wording alludes to the need to normalize policies to contain leverage and financial risks. To support economic recovery, the report asked that liquidity be “appropriate and ample,” and pledged an extension of the debt service moratorium on SMEs and asked large banks to further increase lending to SMEs while lowering effective rates. The last statement seems to be at odds with expectations that rates may move higher in light of strong recovery and policy normalization, but may refer to a lowering of high-cost shadow financing and various loan charges.

We still forecast a 5 basis point rate hike in repo and medium-term lending facility (MLF) rates later in the year (possibly more if higher U.S. yields support a stronger U.S. dollar), and bond yields rise in the middle of 2021 before settling back to current levels at the end of the year. “Flexible” means that the central bank will adjust the pace of policy normalization according to economic development and market conditions, so as to prevent a sharp increase of rates, a big slowdown in credit or large market volatilities.

The report called for money and total social financing (TSF) credit growth to be “basically in line with nominal GDP growth” in 2021, compared with the 2020 wording of “significantly higher than last year.”

We expect China’s nominal GDP growth to be at least 10.5% this year and for adjusted TSF credit growth to slow to 10.8% (10.7% for official TSF) from the peak of 13.8% in October 2020. We think the credit slowdown will be mainly driven by liquidity offering, tighter macro prudential rules and control of shadow credit. Our credit impulse measure is likely to turn negative around May and slide to -5.3% of GDP at the end of 2021 (versus +9.1% in October 2020). The report called explicitly to stabilize China’s macro leverage. Indeed we expect China’s debt-to-GDP ratio to fall by 1 to 2 percentage points in 2021 after a sharp increase of 24 percentage points in 2020, thanks to both credit slowdown and nominal GDP rebound. In addition, the government reiterated its plan to strengthen antitrust policies and supervision over financial holding companies and fintech, saying that “financial innovation needs to be under proper supervision.”

The report kept the same line on yuan exchange rate — “broadly stable” at the “appropriate and equilibrium” level. Following a sharp appreciation in the yuan since the third quarter of 2020, we expect decent fundamentals to support a relatively strong yuan, officially known as the renminbi, against a weak U.S. dollar. The stabilization of U.S.-China relations, continued sizable trade surplus, further portfolio inflows thanks to China’s opening and more index inclusion, and elevated yields in China may push the renminbi to strengthen further against the dollar.

However, later in the year, we expect the growth differential and rate differential between China and other major economies to narrow as the U.S. and global economies recover, which may lead to less capital inflow. In addition, China will likely gradually relax controls on capital outflows. Both may limit the strength of the renminbi. We expect U.S. dollar/renminbi to trade around 6.4 at the end of this year, while it could fluctuate more than before and move close to 6.2 in the middle of the year if the U.S. dollar weakens more than expected.

The report reiterated that there should be “no speculation” in the property market, but was notably silent on preventing property bubbles or tightening credit access. The report called for increased land supply and the construction of more rental housing to address the issue of high property prices in large cities, and increases the new-start target of old-town renovations to 53,000 communities in 2021 from 40,000 in 2020. It is likely that the government will continue its “differentiated” policy on property, relying more on local governments to address property sector issues according to local development. We still expect the recently imposed property exposure cap on banks to stay and see property-related credit growth to slow in 2021. We maintain our current forecasts for the property sales volume to decline by 1% to 3%, new starts falling by 3% to 5%, and property investment growth slowing to 1% to 3% in 2021. Given the expected strong rebound in household income, there may be more of an upside risk to our property sector forecast, especially if rates remain low.

The NPC meeting will review and approve the 14th Five-Year Plan in the coming days. The new FYP has not set an average growth target for the next five years, as an annual target will be set based on the situation each year. The government set boosting domestic demand as the key focus, which means pushing for more structural reforms to unleash growth potential, including reforms of land policy and the “hukou” household registration system, removal of administrative restrictions and red tape, mixed-ownership reform to increase the efficiency of state-owned enterprises, policies to support private and services sector development, and a better social safety net and public services. We also expect the government to open the domestic market further to help attract foreign investment, deter pressure to shift the supply chain away from China, and eventually enhance corporate competitiveness.

Innovation and self-reliance in supply chains are priorities. The government explicitly prioritized fostering innovation and enhancing the domestic supply chain to reduce vulnerabilities to foreign disruptions, in response to the continued tech restrictions and “decoupling” pressures faced by China. Related policy measures include proposing a 10-year action plan for fundamental research, pushing for breakthroughs in frontier areas (e.g. artificial intelligence, quantum information, integrated circuits, brain science, gene and biotech, etc.), enhancing incentive plans for innovation and intellectual property protection, encouraging investment in technology and various bottleneck areas. Moreover, in the new FYP, China aims to boost R&D spending by at least 7% per year during the 2021-2025 period. We expect the actual average growth to be higher than 7%, lifting annual R&D spending from 2.4 trillion yuan in 2020 to 3.8 trillion yuan to 4 trillion yuan in 2025.

Greener development is a key macro theme. To achieve “carbon neutrality” by 2060, the government aims to soon compile an action plan for controlling carbon emission (peaking) by 2030. Echoing this, the government aims to increase the share of non-fossil-fuel energy in total energy consumption from 15.3% in 2019 to 20% in 2025 and 25% in 2030, and lower energy consumption and carbon dioxide emissions per unit of GDP by 13.5% and 18%, respectively, during the 2021-2025 period. More initiatives also include a clear roadmap for peaking coal consumption, more support for the new-energy sectors, and establishment of national exchange markets for energy consumption and carbon emissions.