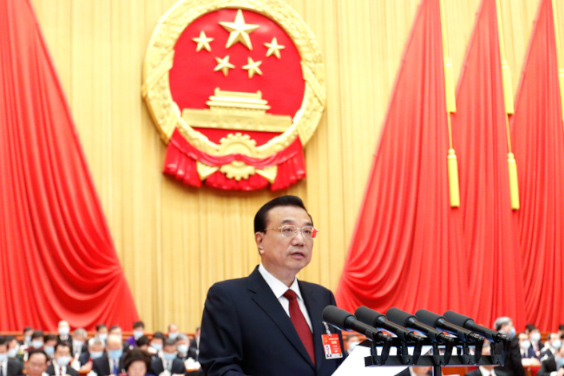 Chinese Premier Li Keqiang Friday delivered a report on the work of the central government on the first day of the annual gathering of the country’s legislature, the National People’s Congress (NPC). He reviewed the government’s work last year, laid out economic and social targets for 2021 and the national development roadmap for the next five years. Here are the highlights selected from the premier’s work report:

Work review of the Central Government in 2020

― Based on China’s realities, we refrained from adopting a deluge of strong stimulus policies but took swift, decisive and well-considered steps, thus maintaining a desired balance between various macro policies.

― By making both time-limited large-scale tax and fee cuts and institutional arrangements, we reduced the burden on market entities by more than 2.6 trillion yuan for the year, including 1.7 trillion yuan in social insurance premium cuts and exemptions.

― China was able to take the lead in reopening its economy. With gross domestic product (GDP) for the year growing by 2.3%, a better-than-expected recovery was achieved.

― The number of new market entities began growing rapidly again, leading to the creation of a large number of new jobs. A total of 11.86 million urban jobs were added, and the year-end surveyed urban unemployment rate dropped to 5.2%.

― We increased funding for poverty alleviation by a considerable sum. All remaining poor rural residents, totaling 5.51 million in early 2020, were lifted from poverty, as were all of China’s remaining 52 poor counties.

Major Targets and Tasks for the 14th Five-Year Plan Period

― To improve China’s innovation system, we will work faster to enhance our strategic scientific and technological capability underpinned by the development of national laboratories, strive to make major breakthroughs in core technologies in key fields, and formulate and implement a 10-year action plan for basic research.

― China’s R&D spending will increase by more than 7% per year, which is expected to account for a higher percentage of GDP than that during the 13th Five-Year Plan period.

― We will ensure that China meets the targets for its intended nationally determined contributions in response to climate change by 2030. Energy consumption per unit of GDP and carbon dioxide emissions per unit of GDP will be reduced by 13.5% and 18%, respectively.

― We will work to achieve an appropriate birth rate. The statutory retirement age will be raised in a phased manner. The multi-tiered social security system will be improved, with coverage of basic old-age insurance reaching 95% of the population.

― The main projected targets for development this year are as follows:

― A surveyed urban unemployment rate of around 5.5%

― CPI increase of around 3%

― A basic equilibrium in the balance of payments

― A further improvement in the environment

― A continued reduction in the discharge of major pollutants

― In view of the effective containment of Covid-19 and gradual economic recovery, we have set the deficit-to-GDP ratio for the year at around 3.2%, slightly lower than that of last year. No Covid-19 bonds will be issued. As government revenue rebounds, total government expenditures will be higher this year than last.

― The VAT threshold for small-scale taxpayers will be raised from 100,000 yuan to 150,000 yuan in monthly sales. On the basis of preferential policies already in force, we will halve the income tax of micro and small enterprises and 17 self-employed individuals on annual taxable income below 1 million yuan.

― We will continue to implement the three-year action plan for SOE reform, and work to strengthen, expand, and increase the returns on state capital and enhance the strength, quality, and size of SOEs. We will also push ahead with mixed-ownership reform in SOEs.

― We will strengthen comprehensive measures and joint efforts on air pollution prevention and control, and step up coordination on the control of fine particulate matter and ozone pollution. Clean heating will account for 70% of all heating in northern China.

― We will draw up an action plan for carbon emissions to peak by 2030. China’s industrial structure and energy mix will be improved. While promoting the clean and efficient use of coal, we will make a major push to develop new energy sources, and take active and well-ordered steps to develop nuclear energy on the basis of ensuring its safe use.

― We will make meticulous preparations for the 2022 Winter Olympics and Paralympics in Beijing.