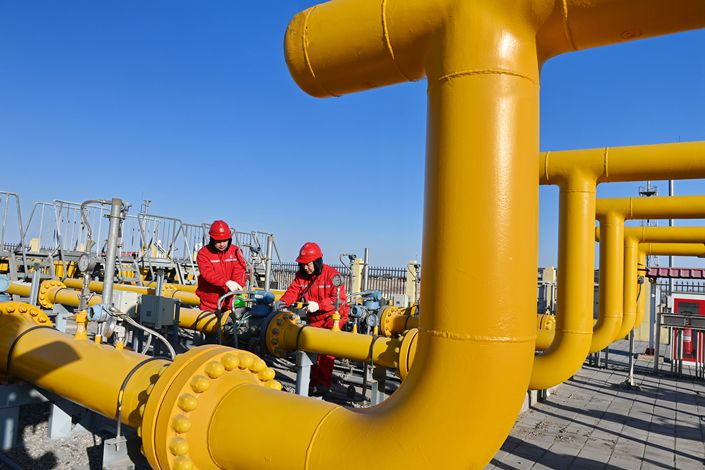 The output of electricity, coal and natural gas by large industrial enterprises in China all increased by more than 10% year-on-year in the first two months of 2021. Photo: VCG

Production of energy products and major commodities increased significantly in China in the first two months of the year, with double-digit gains driven by a robust recovery in industrial activity.

Gains were reported in January and February by the National Bureau of Statistics (NBS) Monday in the production of natural gas and crude oil, and a boost to steel production.

China produced 175 million tons of crude steel in the two months, up by 12.9% year-on-year, with a daily output of 2.97 million tons, according to NBS data. Production output increased 17% compared with the same period in 2019.

The NBS doesn’t provide a monthly breakdown of data for the first two months of the year to eliminate the effects of a seven-day national holiday that usually falls in the period. And as the Covid-19 pandemic almost brought the country’s economic activities to a standstill in early 2020, the low bases last year caused some analysts to compare this year’s readings with the same period in 2019 to better understand China’s recovery.

Wang Guoqing, a director at the Lange Steel Information Research Center, told Caixin the increases were mainly due to a surge of production output that started flowing into the market in May.

China pledged in January to ensure the country produced less steel this year than in 2020, when the world’s biggest producer of the metal topped 1 billion tons of output.

Production of natural gas and oil in China also rose in the first two months of the year.

The robust energy output came as China called for greater self-reliance on energy supply, and improvements in drilling technology in the oil and gas sector, an industry analyst said.

The strong growth in production of commodity and energy products is an indicator of the steady momentum of recovery in overall industrial output as measured by production at factories, mines and utilities.

According to a separate statement by the NBS on Monday, the industrial output reading grew 35.1% year-on-year in the first two months, beating a previous forecast of 31.2% by a Caixin survey. It also increased 16.9% compared with the pre-pandemic level, thanks to the “stay put” policy applied during Lunar New Year holiday.

But despite increasing supply of commodities and energy products, China’s producer price index (PPI), which measures changes in prices of goods circulated among manufacturers and mining companies, posted its highest monthly increase in 12 months in February, NBS data showed.

Jiang Yuan, a deputy director of NBS, said in a briefing Monday that the foundation for a full recovery of industry is not yet solid, and the recent surge in commodity prices has weighed on companies’ business and made it more difficult for them to curb carbon emissions.