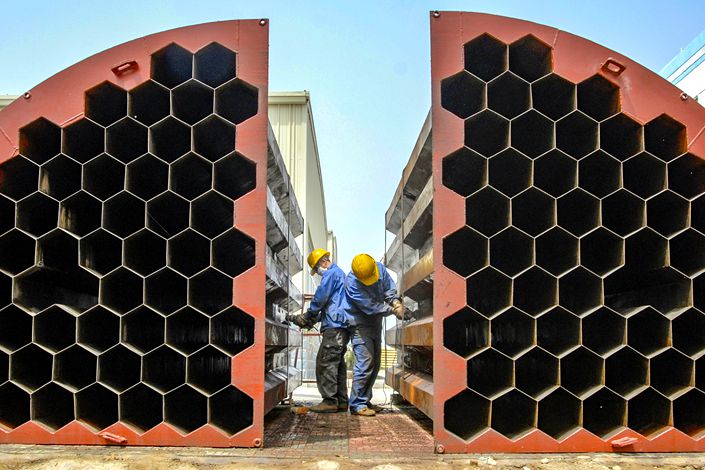 China’s economic recovery continued in the first two months of 2021, official data showed Monday, with the figures given an extra boost off a low comparison base due to the anti-epidemic measures imposed last year that ground large parts of the economy to a halt.

On the supply side, value-added industrial output — which measures production by factories, mines and utilities — grew 35.1% year-on-year (link in Chinese) in the first two months, beating the median forecast for 31.2% growth in a Caixin survey (link in Chinese) of economists. Comparing the figure to the pre-pandemic level, output grew 16.9% relative to the same period in 2019, according to data from the National Bureau of Statistics (NBS).、

Industrial production was given added impetus by policies that encouraged people not to travel for the traditional Lunar New Year homecoming in order to prevent the spread of the coronavirus, NBS spokesperson Liu Aihua said at a Monday briefing (link in Chinese). It meant that people took less time off work than usual, and fewer working days were lost than in previous years, she said.

Industrial production rose faster than the demand-side gauges of consumption and fixed-asset investment, if the figures are compared to the pre-pandemic 2019 levels.

Retail sales rose 33.8% year-on-year (link in Chinese) in January and February combined, up 6.4% compared to the same period in 2019, NBS data showed. The year-on-year reading came in higher than the median forecast for a 32.1% increase in the Caixin survey. “Looking ahead, consumption growth could continue to accelerate as the government is loosening controls on travel,” analysts at Macquarie Group Ltd. wrote in a note.

Fixed-asset investment, a key driver of domestic demand, grew 35% year-on-year (link in Chinese) in January and February combined and 3.5% compared to the same period in 2019, according to NBS data. The year-on-year rate was lower than the median forecast of 41.5% growth in the Caixin survey.

After adjusting for baseline effects, investment’s gain from its January-to-February 2019 level was mainly led by the property sector, the Nomura economists wrote.

Investment in real estate development rose 38.3% year-on-year (link in Chinese) in the first two months of 2021, up 15.7% compared to the same period in 2019. “Solid property investment and new home sales data point to strong momentum in the property sector in the near term despite Beijing’s tightening measures,” the Nomura economists said.

Infrastructure investment, which consists of spending on road and railway construction and is generally led by the government, rose 36.6% year-on-year last two months.

The labor market was under pressure as China’s surveyed urban unemployment rate rose to 5.5% (link in Chinese) in February from 5.4% in January and 5.2% in December, but the rate was lower than the recent peak of 6.2% in the same period last year.

“We have a positive outlook for exports and manufacturing investment this year,” Louis Kuijs, head of Asia economics at research firm Oxford Economics Ltd., wrote in a note, adding that household consumption is expected to become a key driver of growth from the second quarter onwards as confidence improves.