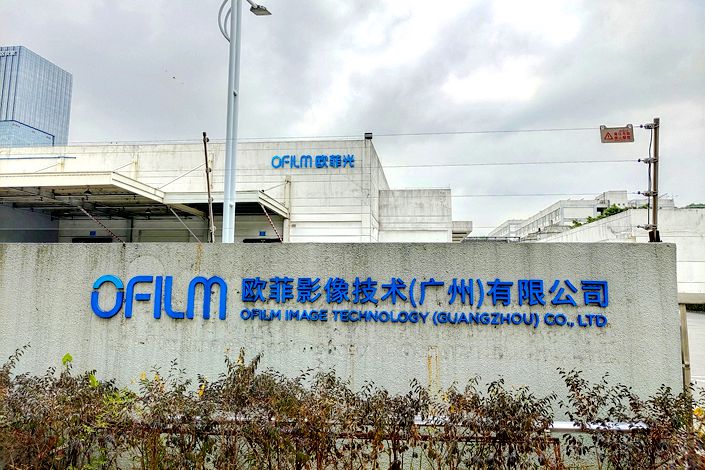 Chinese camera phone component supplier OFilm Group Co. Ltd. (002456.SZ) said one of its top foreign clients, thought to be U.S. tech giant Apple Inc., has terminated their purchase agreement worth tens of billions of yuan in the latest blow from U.S. sanctions that have already ravaged its business.

The Shenzhen-based manufacturer said it had received a notice from a “certain overseas client” saying it plans to cease purchases from OFilm and its subsidiaries, according to a filing (link in Chinese) to the Shenzhen Stock Exchange Tuesday. The statement did not name the client.

State-owned media outlet China Fund said in an article on Wednesday that the unnamed client is Apple, citing a strategic meeting held by OFilm in October, when the company said its top three clients in 2019 were Huawei Technologies Co. Ltd., Apple and Xiaomi Corp., contributing 32%, 20% and 19%, respectively, to its operating income.

According to OFilm’s Tuesday filing, the unnamed client was its second largest in 2019, generating 11.7 billion yuan ($1.8 billion) in operating income that year, accounting for 22.51% of the company’s total.

OFilm became part of Apple’s supply chain in 2016 after it acquired a factory in the southern city of Guangzhou from Sony Corp. for $234 million. That factory supplies camera modules to Apple.

Under the administration of former President Donald Trump, the U.S. sanctioned dozens of Chinese enterprises like Huawei, ByteDance Ltd.’s short-video app TikTok and Semiconductor Manufacturing International Corp. over concerns about their alleged links to the Chinese Communist Party and the nation’s military. China has called on Washington to halt the “arbitrary suppression” of Chinese companies.

OFilm has already been hit hard by the U.S. sanctions after one of its largest subsidiaries — Nanchang O-film Tech Co. Ltd. — was added to the U.S. Department of Commerce’s Entity List in July. It was among 11 singled out for involvement in alleged human rights violations. Earlier this month, incoming U.S. Commerce secretary Gina Raimondo signaled that the Biden administration would not pull back on the issue.

The company will no longer receive orders from this client and “the impact of the change to the company’s operations is being evaluated and is subject to great uncertainty,” the filing said.

Shares of OFilm slumped by their daily limit on the news and ended the day down 9.95% on Wednesday at 9.14 yuan, the lowest close since August 2019.

After the filing, the Shenzhen bourse asked the company to disclose the exact date of the termination of its business ties with the client, as well as the status of its current orders. The inquiry also ordered OFilm to specify the impact of the decision on the sell-off plan it announced earlier this year.

In January this year, Ofilm announced a sell-off plan that includes stakes in four subsidiaries, two of them are the sanction-hit Nanchang subsidiary and the Guangzhou factory. The move had sparked speculation that it may be about to lose the U.S. smartphone giant as a client.

The four subsidiaries together have total assets of $1.7 billion, and analysts have said the planned divesture may reflect a move to offload low-profit businesses, as the four companies had an average profit margin of 0.12% in 2019.

OFilm updated the plan in the Tuesday filing, saying it is still in progress and the impact of the change in orders is being evaluated by both sides amid considerable uncertainty.

The company estimated its annual operating income for 2020 shrank by 6.87% year-on-year to 48.4 billion yuan, but its profit jumped 72.7% from 2019 to 880 million yuan during the same period, according to a Feb. 27 statement to the Shenzhen bourse.