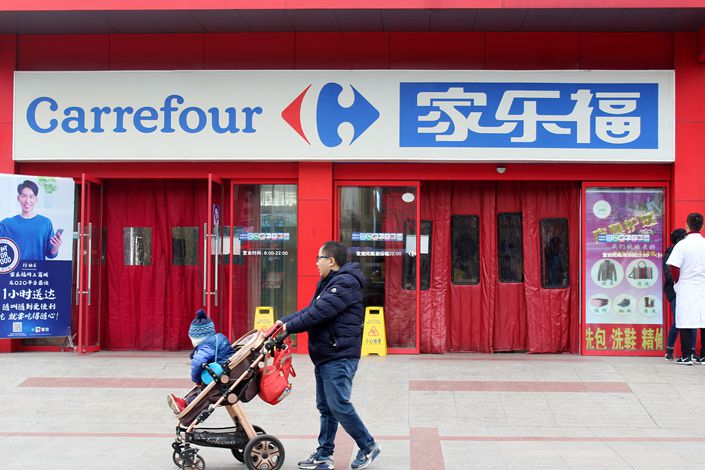 Suning now has 228 Carrefour stores across the country. Photo: VCG

Tian Rui, the chief executive of Carrefour China, told Caixin on Friday that he could not set a timeline or venue for the potential initial public offering due to uncertain market conditions. First, he said, the company is seeking out new strategic investors.

France’s Carrefour, which has struggled with years of sinking Chinese sales, increased competition and a failure to meld its chain of over 200 hypermarket outlets with consumers growing e-commerce buying habits, sold an 80% controlling interest to Chinese electronics appliance retailer Suning.com in June 2019 in a bid to derive supply chain synergies between the otherwise independent retailers.

Furthermore, the purchase of the 80% stake in Carrefour for 4.8 billion yuan ($669 million) added to Suning.com’s growing mountain of debt, which now totals 16 billion yuan and is set to come due next year. In February, Suning received a bailout from firms controlled by the Shenzhen municipal government, but it still needs added cash and must shed more assets, an investor close to Suning said.

The company announced that four of its five largest shareholders, including its founder, would sell a combined 23% of the company’s shares for 14.8 billion yuan to Shenzhen International Holding Ltd. and Shenzhen Kunpeng Equity Investment Management Co Ltd., both under the Shenzhen branch of the State-owned Assets Supervision and Administration Commission.

The investment can only temporarily ease Suning’s liquidity pressure, and the key is whether the company can regain its cash-generating ability by improving operations and reducing costs, a bank executive in Jiangsu province told Caixin.

Following the purchase of its stake two years ago, Suning said the Carrefour purchase would help expand its bricks-and-mortar footprint and allow it draw on Carrefour China’s fast-moving consumer goods and supply chain capabilities. At the time, Suning.com founder and largest shareholder Zhang Jindong said the firm would open 300 new stores in China’s biggest cities over five years.

Things picked up in the first quarter after the purchase closed when Carrefour China made a quarterly profit, and in 2020 it posted an annual profit before tax for the first time in eight years.

Nanjing-based Suning told Caixin that Carrefour has supplied more than 30,000 types of products to its online retailers and brick-and-mortar convenience store chains Suning Xiaodian. Its home-delivery services, which was launched in February last year, has grown 139% over the past year.

But two years after the acquisition, insiders say the integration has struggled and pandemic-led shifts in consumer buying habits toward ecommerce haven’t helped. The prospects for Carrefour to reverse its financial situation is dire, a former executive with Carrefour China told Caixin, adding that year-end sales continued to slide despite a slight uptick in fresh produce sales during the pandemic.

The executive said that the Carrefour and Suning “hadn’t achieved synergies in logistics,” and there was little room for the supermarket chain to further control its costs.

Suning also has lost confidence with once loyal supply chain partners. Since taking over Carrefour China, it extended the payment period for suppliers from a standard 60 days to as much as four months, causing the supermarket to lose some long-term suppliers, two former partners said. “The extended payment period is deadly,” a small food supplier to Carrefour for more than 10 years told Caixin, “I dared not keep it going.”

“The only right move Suning has made was to close the Carrefour stores that had not done well,” the supplier said, adding that, under the ownership of the French company such cost-cutting decisions had proved hard to make. In 2020, Suning closed 20 Carrefour stores, according to its financial report, but opened 15 new ones. It now has 228 Carrefour stores across the country.