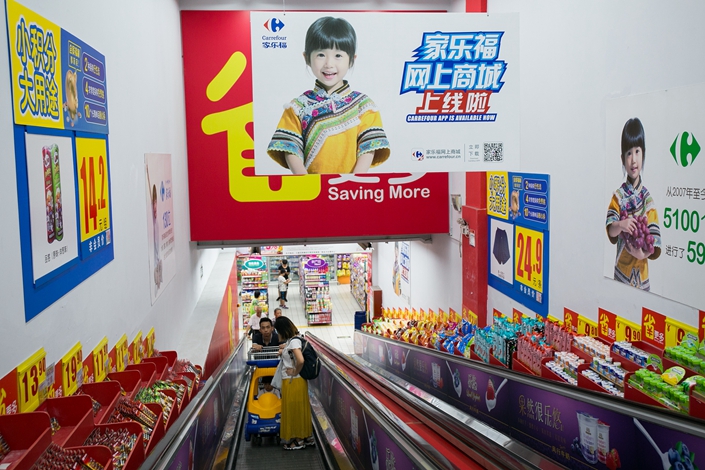 * Carrefour said Sunday that Chinese retailer Suning.com would buy an 80% stake in its China business for nearly $700 million

* The sale follows several difficult years for the business. Last year, the company’s loss in China increased by 47.4% to 578 million yuan ($84.1 million)

(Beijing) — French supermarket chain Carrefour SA has found someone to take over its struggling China business after failing to seal deals with several potential Chinese buyers, including internet titans Alibaba and Tencent.

Carrefour’s retreat from the Chinese market follows years of struggle in the country, where e-commerce penetration is among the world’s highest. In 2018, net sales of Carrefour’s Chinese unit fell about 10% to 3.6 billion euros, according to the company’s annual report.

The French retailer has been trying to sell its Chinese business since at least the end of 2017. At the time, a market source close to Carrefour China told Caixin that e-commerce giant Alibaba Group Holding Ltd. was interested in a taking a controlling stake. The deal later fell apart.

Tencent’s interest in Carrefour China at the time came as it looked to push its mobile payment services into more brick-and-mortar retailers amid fierce competition with rival Alibaba. But Tencent later realized that it didn’t need spend that much to achieve its goal.

On Monday, Yonghui Superstores said in a statement (link in Chinese) that it has abandoned its plan to invest in Carrefour.

Carrefour entered the Chinese market in 1995. It currently operates 210 supermarkets and 24 convenience stores in the country. Last year, the company’s loss in China increased by 47.4% to 578 million yuan.

Suning is one of China’s largest retailers with over 8,881 stores in more than 700 cities. The Nanjing-based company reported a net profit of 13.3 billion yuan on revenue of 245 billion yuan last year.

The deal with Carrefour came after Suning said early this year that it acquired 37 outlets from Wanda Department Stores, a subsidiary of Chinese conglomerate Dalian Wanda Group. Sunning didn’t reveal the price of the deal at the time, but a company source told Caixin that it was valued at 7 billion yuan.