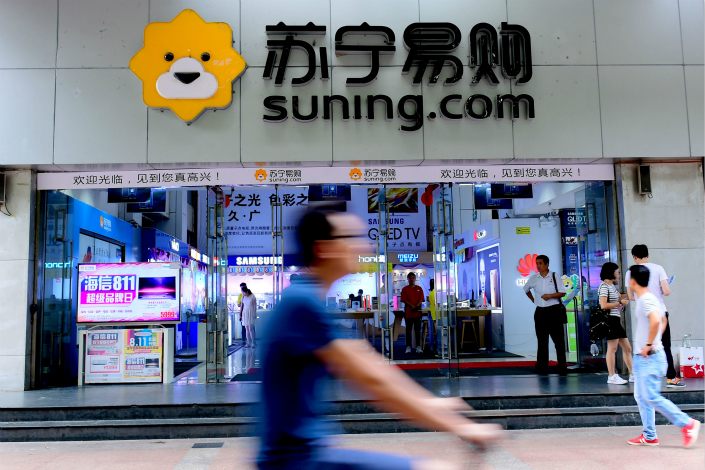 A Suning.com shop is seen in Guangzhou, Guangdong province, on Aug. 6. Photo: VCG

Electronics retailer Suning.com Co. Ltd. continued to sell down its stake in e-commerce giant Alibaba Group Holding Ltd., reaping a large profit from a large run-up in the shares since the pair swapped stock as part of a strategic alliance three years ago.

Suning said it sold Alibaba shares for $1.5 billion, netting a profit of about 5.6 billion yuan ($890 million) on the transaction, according to a Shenzhen Stock Exchange filing on Wednesday (link in Chinese). It did not specify the number of shares sold, but said its board in December had previously authorized the company to sell up to 7.66 million Alibaba shares, equivalent to about 0.3% of Alibaba’s total share count.

Following the sale, Suning said it will continue to hold about 13.2 million Alibaba shares, equivalent to about 0.51% of Alibaba’s total share count. It added it will revise its financial guidance for the first half of 2018 to reflect gains from the share sale.

The sale follows a similar one announced in December, when Suning netted 3.25 billion yuan in profit from its sale of about 5.5 million Alibaba shares, equal to about a fifth of its Alibaba holdings at that time.

Between the two sales, Suning has now reaped a profit of nearly 9 billion yuan from its Alibaba investment.

Suning and Alibaba formed a strategic tie-up in 2015, pooling their complementary assets in traditional brick-and-mortar and online retailing respectively. Under that deal, Alibaba agreed to buy about 20% of Suning’s shares for 28.3 billion yuan. Suning said at the time it would buy up to 27.8 million Alibaba ordinary shares, representing 1.1% of the e-commerce giant’s total stock, for up to 14 billion yuan.

Suning said it will use money from the latest share sale to support its sales channel development, product diversification and development of new technologies. It emphasized that Alibaba still holds 20% of Suning shares, and that the pair remain strategic partners.

“The company will continue to combine its own assets and deepen its relationship with Alibaba through collective purchasing, operations of its flagship store on (Alibaba’s) Tmall, logistics services, online-to-offline (O2O) integration and other areas of strategic cooperation,” Suning said.