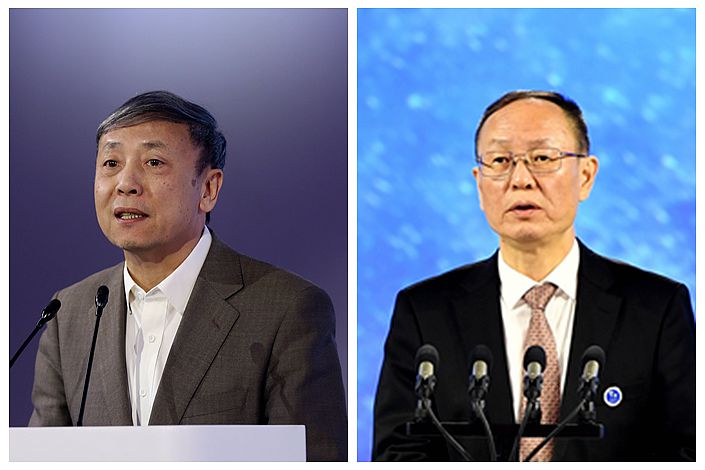 Cai Fang (left), a senior expert at the state-backed Chinese Academy of Social Sciences, and Wang Yiming, a vice chairman of the China Center for International Economic Exchanges.

The Chinese government has approved the appointment of two economists from top government-backed think tanks to the central bank’s monetary policy committee and has removed two members from the body, an official statement said.

Cai Fang, a senior expert at the state-backed Chinese Academy of Social Sciences, and Wang Yiming, a vice chairman of the China Center for International Economic Exchanges, were appointed to the Monetary Policy Committee (MPC) of the People’s Bank of China (PBOC), according to a notice (link in Chinese) released Saturday by the State Council, China’s cabinet.

Ma Jun, a former economist with Deutsche Bank AG and now the director of a central bank-backed think tank’s green finance committee (link in Chinese), stepped down from his position as an MPC member, along with Liu Wei, president of Renmin University of China, the notice said.

Founded in 1997, the MPC advises the PBOC on monetary policy. It has 14 members, 10 of whom are senior economic and financial regulatory officials. These include the central bank governor, two of its deputy governors, a vice finance minister, and the chairmen of the banking and insurance regulator and the securities regulator. PBOC Governor Yi Gang chairs the committee.

The four other members are the chairman of China Construction Bank Corp. (601939.SH), Tian Guoli, and three economic and financial experts. Each of them serves a two-year term under MPC rules.

The State Council said another expert member, Liu Shijin, will remain on the committee. Liu is a senior economist and member of China’s top political advisory body, the national committee of the Chinese People’s Political Consultative Conference (CPPCC).

New MPC member Cai, 64, is now a deputy head (link in Chinese) of the Agriculture and Rural Affairs Committee of the National People’s Congress, China’s top legislature. His research covers a variety of fields including agriculture and population economics.

Wang, 61, had been a deputy director (link in Chinese) at the Development Research Center, a think tank under the State Council.

Sources with knowledge of the matter have told Caixin that previous MPC member Ma appears likely to be appointed as China’s representative to the G-20 Sustainable Finance Study Group, which is co-chaired by the PBOC and the U.S. Department of the Treasury.