By Lu Kejia and Denise Jia 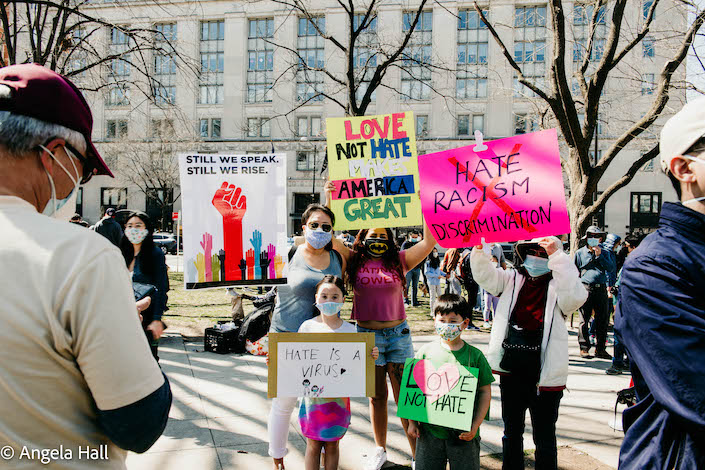 Protesters in a rally against anti-Asian hate violence in Washington D.C. on March 20. Photo by Angela Hall

People across the U.S. participated in rallies Saturday to condemn attacks against Asian Americans after a shooting massacre in Atlanta last week targeting Asian-owned massage spas killed eight people, six of them of Asian descent.

The demonstrations happened as activists linked the shooting on March 16 to a surge in hate crimes against Asian Americans amid the Covid-19 pandemic.

Robert Aaron Long, the White shooter, reportedly denied the killings were racially motivated, although media reported he said “I will kill all Asians” at the shooting scene. A statement from local sheriff’s office spokesman Jay Baker, describing the shooter as a man “at the end of his rope” and calling the incident a “really bad day” for him, ignited an instant outcry.

In a protest outside the Georgia state Capitol in Atlanta, Georgia’s first Vietnamese American state representative Bee Nguyen listed discriminatory and demeaning labels that have been applied to Asians, from “Yellow Peril” to “Kung Flu Virus”.

“We have lived in the shadows, invisible, overlooked, stereotyped and relegated as second-class citizens,” Nguyen said. “No matter how you want to spin it, the facts remain the same. This was an attack on the Asian community.”

Discrimination, prejudice, and neglect against minorities and women permeate almost every hub of social justice in the United States, from the judiciary system and major media to local police departments and public opinion, Nguyen said.

Verbal harassment and shunning were the most common types of discrimination, making up 68.1% and 20.5% of the reports, respectively. The third-most common category, physical assault, made up 11.1% of the total incidents. Asian women report hate incidents 2.3 times more than men.

A 24-year-old Korean-American female protestor at Times Square in New York said these assaults made her realize that she is in constant danger of being attacked. Now she is turning the fear and anger into action, she said.

A Chinese graduate student from Georgetown University who participated in the protest in Washington D.C. Saturday said Asians are used to being too “compliant,” even at protests. Many protestors, wearing masks due to the pandemic, just walked in the crowd in silence, and very few chanted, she observed. But she said she’s glad many young Chinese students chose to participate in the protest, rather than watching from the sidelines.

Former U.S. President Donald Trump, who repeatedly used the “Kung Flu” when referring to the Covid-19 coronavirus, has been criticized that his racist rhetoric encouraged xenophobic sentiment and hate violence. Trump’s office hasn’t commented on the Atlanta incident.

“Too many Asian Americans have been walking up and down the streets and worrying, waking up each morning the past year feeling their safety and the safety of their loved ones are at stake,” Biden said. “It’s been a year of living in fear for their lives just to walk down the street.”

China on Monday urged the U.S. to take “effective” measures to ensure the safety and rights of Chinese nationals within its borders, following the death of a Chinese woman in the Atlanta shooting.