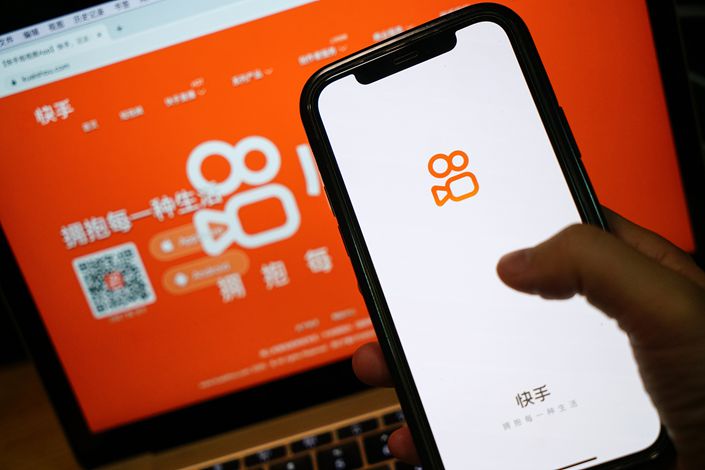 Kuaishou racked up the loss as competition in China’s short-video market intensifies, with the company locked in a battle to win users with ByteDance. Photo: VCG

Kuaishou Technology Co. Ltd., operator of the world’s No. 2 short-video app behind ByteDance’s TikTok, saw its shares tumble over 12% Wednesday after reporting a widened quarterly loss, as increased spending to boost its user base ate into revenue.

Shares of the Beijing-based startup slumped 12.55% after reporting a loss of 19 billion yuan ($2.91 billion) in the last three months of 2020 compared with 18 billion yuan a year earlier, according to its financial report Tuesday. Fair value changes in preferred shares also contributed to the loss, according to figures in the company statement.

The company attributed the loss to increased spending on sales and marketing to expand its user base and promote brand awareness. The financial report was the first since its blockbuster IPO in Hong Kong last month, which raised $5.4 billion, making it the world’s biggest internet IPO since the $8.1 billion U.S. share sale of Uber in May 2019.

Kuaishou racked up the loss as competition in China’s short-video market intensifies, with the company locked in a battle to win users with ByteDance Ltd. Douyin had 629 million average monthly active users in the fourth quarter 2020, while Kuaishou boasted 331 million, according to Aurora Mobile.

For the full year it posted a net loss of 116.6 billion yuan last year, compared with 19.6 billion yuan in 2019, while revenue grew more than 50% year-on-year to 58.8 billion yuan on increased advertising fees, it said.

Its spending on sales and marketing amounted to 26.6 billion yuan over the past year, up nearly 170% and accounting for 45.3% of its entire revenue, up from 25.2%, according to the report. Revenue from online marketing services in 2020 increased by 194.6% to 21.9 billion yuan, while average online marketing services revenue per daily active user (DAU) in 2020 increased by 95.3% to 82.6 yuan.

“In the fourth quarter of 2020, online marketing services became the largest contributor to our total revenue, as a percentage of revenue, it surpassed the contribution of live streaming business for the first time,” it said in the report.

Originally focused on providing entertaining content, short-video platforms have expanded their services into livestreaming e-commerce, where products are promoted and sold via livestreams, diversifying their revenue sources.

However, Kuaishou’s revenue from livestreaming dropped to 56.5% of the total 58.8 billion yuan last year, down from 80.4% a year earlier, according to the company statement. Its revenue structure has shifted to rely more heavily on marketing services surrounding advertisements, which contributed 37.2% of its entire revenue, up from 19% in 2019.

However, the company continues to ride China’s lucrative livestreaming e-commerce trend, fueled by the pandemic-induced demand for online shopping, with its gross merchandise volume sold via the platform reached 381.2 billion yuan, over six times bigger than the previous year.

In the September-December quarter, the company boasted 271 million DAU and 476 million monthly active users of, both figures rising over 20% from the same time in 2019. However, it was still pipped by ByteDance’s Douyin, who said it had over 600 million DAUs in January.

Kuaishou, which means “fast hand” in Chinese, is one of China’s biggest internet success stories of the past decade, part of a generation of startups that thrived with backing from Tencent. It became the world’s largest livestreaming platform at the end of 2017, but failed to anticipate the success of Douyin, which was founded in 2016, and has blazed a trail internationally with TikTok, despite geopolitical ructions.

Along with ByteDance, the decade-old company pioneered the livestreaming and the bite-sized video format that has since been adopted around the world by the likes of Facebook.