Seaborne Shipments of Covid-19 Vaccines to Peak in Second Half, Freight Giant Says 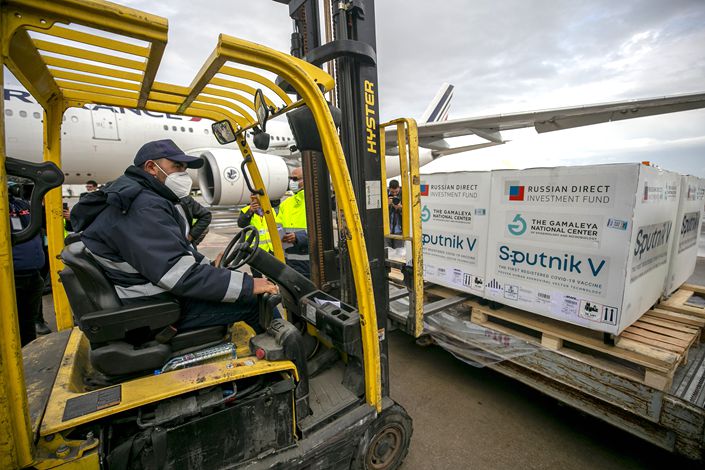 Seaborne shipments of the Covid-19 vaccine will peak in the second half of the year as the global rollout sees containers loaded with the life-saving medicine steaming to Asia, Africa and South America, the world’s biggest container shipping line AP Moller-Maersk A/S told Caixin.

The current phase of the rollout is generally being done by road due to the low costs and convenience of distribution, as a majority of vaccine manufacturers are located in Europe, the U.S. and India, Hristo Petkov, head of pharmaceutical at Maersk, said in a written reply to Caixin’s questions.

Nearly half of the vaccines to be transported to Africa and South America in refrigerated containers by sea will be during the second half of the year, when demand for such containers could reach up to 2,500 twenty-foot equivalent units (TEUs), said Petkov.

Deaths globally from Covid-19 saw a slight increase for the first time in six weeks, a leading expert from the World Health Organization said Monday, coming as new waves of the deadly virus ravage Europe and threaten the U.S., adding even greater urgency to the vaccine rollout.

As of Monday, there have been more than 122.9 million confirmed cases of Covid-19 globally, and more than 2.7 million deaths, according to the WHO. Meanwhile, more than 397.9 million vaccines have been administered globally.

Seaborne refrigerated containers are commonly used to ship medical goods as they can maintain temperatures below 35 degrees Fahrenheit, said Petkov, adding that this would be a challenge to transport vaccines by air as there’s only limited room on an airplane to store dry ice due to safety reasons.

Maersk has partnered with a U.S. biotechnology company Covaxx, which is developing a peptide vaccine candidate, to deliver the medicine, with a goal of distributing up to 1 billion doses around the world by the end of the year, according to a press release in October. Development is still in its early stages.

However, the International Chamber of Shipping (ICS), the world’s largest merchant shipping industry group, warned in a Monday press release that lack of access to vaccines for ship crews could frustrate global supply chains and see voyages to some nations cancelled.

The group is seeking to prevent nations from requiring that crews be vaccinated, saying 900,000 seafarers are from developing nations where vaccine rollouts have been slow.

“We’re already seeing reports of states requiring proof of COVID-19 vaccination for seafarers,” said ICS secretary-general Guy Platten. “If our workers can’t pass through international borders, this will undoubtedly cause delays and disruptions in the supply chain. For a sector expected to help drive the global vaccination effort, this is totally unacceptable.”

The group says it is creating a “perfect storm” for shipowners, who may be forced to cancel voyages if crew members are not vaccinated.