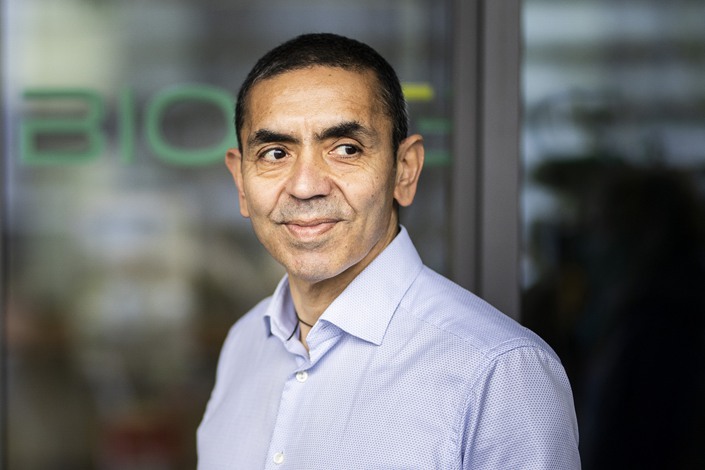 The head of BioNTech SE said the German pharmaceutical giant is “very encouraged” by the safety and efficacy data of the coronavirus vaccine it co-developed with Pfizer Inc. and is on course to ship an initial 100 million doses to the Chinese mainland upon approval.

Ugur Sahin, the company’s CEO and co-founder, also told Caixin in a written interview that supplies of the vaccine in the European Union were “back on track” after initial disruption caused by an increase in production capacity.

The comments come as countries continue large-scale campaigns to inoculate people against the virus that causes Covid-19 and which has sickened more than 100 million people and killed 2.3 million since the start of last year, according to data from Johns Hopkins University.

China’s vaccination drive has so far depended on a domestically produced shot by Sinopharm Group Co. Ltd. On Monday, another homegrown pharmaceutical firm, Sinovac Biotech Ltd., said it had won conditional approval to use its Covid-19 vaccine on the general public.

In December, Shanghai Fosun Pharmaceutical Group Co. Ltd. said it would supply the Pfizer-BioNTech jab to the Chinese mainland once it gained approval from the local regulator.

BioNTech and U.S.-headquartered Pfizer drew plaudits in November when they reported that their vaccine is 95% effective against Covid-19. Further studies since then have indicated that the shot also provides protection against the emerging U.K. and South Africa coronavirus strains.

Addressing the vaccine shortages that have so far hindered the EU’s inoculation efforts, Sahin said the scarcity of Pfizer-BioNTech jabs was “because we increased the capacity of our vaccine production from 1.3 billion to 2 billion doses” by the end of the year, but he did not give details of how this contributed to the shortfall. He added that “deliveries are already back on track.”

The company’s coronavirus vaccine is currently undergoing trials in China ahead of a planned shipment of 100 million doses. Sahin said some 960 volunteers aged between 18 and 85 had so far received two doses of the shot, adding that “there is no reported serious safety concern so far.”

Upon approval, BioNTech and Fosun Pharma plan to supply the vaccine from BioNTech’s production facilities in Germany with support from a “specialized network” of partners like Swiss pharmaceutical firm Novartis AG, according to Sahin.

“The production of mRNA vaccines requires specialized know-how,” Sahin said, referring to the nascent technology used to produce both the Pfizer-Biotech and the Moderna Inc. jabs.

While conventional vaccines inject a weakened or inactive pathogen into the body to stimulate an immune response, mRNA vaccines teach cells to make proteins or strands of proteins that trigger the same kind of reaction.

Some evidence suggests that some mRNA vaccines may be more effective than conventional shots because they provoke a more comprehensive immune response.

The advantages of mRNA vaccines are that they don’t contain any viral proteins, can be manufactured faster than conventional jabs, can be produced in a “relatively simple” chemical process instead of “complex” cell-line development, and be boosted if immunity wears off after a certain time, Sahin said.

“We believe that mRNA vaccines represent a powerful new class of innovative vaccines that could overcome many of the challenges faced by older technologies,” he said.