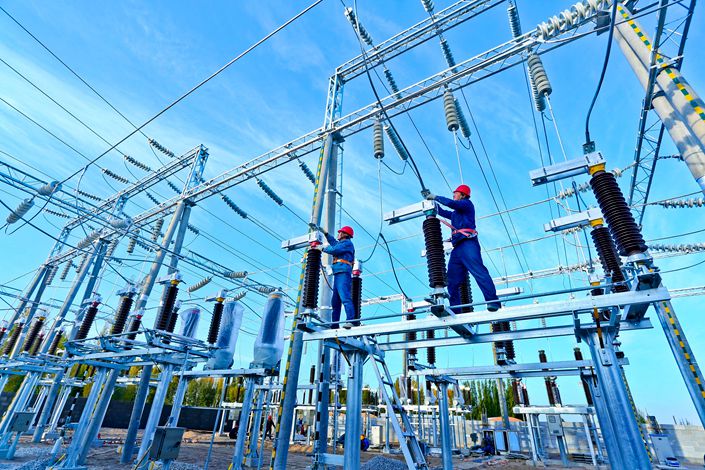 China will need to sharply build up its solar and wind energy capacity in order to meet its aggressive goals for a carbon emissions peak by 2030 and carbon neutrality by 2060. Photo: VCG

China’s power system could soon get a major jolt of green energy.

Such a drive for zero-carbon power could well be on the way as the nation races to meet its goal of reaching peak carbon emissions by 2030, and going carbon neutral by 2060, which President Xi Jinping stressed at the ninth meeting of the Central Committee for Financial and Economic Affairs in mid-March.

Concurrent with that message, the Central Committee proposed the concept of a “new power system” for the first time, which would include a clean, low-carbon system as part of a move away from traditional fossil fuels and with more focus on renewable sources like wind, solar and hydropower.

“In the future, the power system will be a central hub for promoting low-carbon energy transformation,” said Zhou Dadi, former director of the Energy Research Institute (ERI) under the National Development and Reform Commission (NDRC), China’s state planner. To achieve that aim, Zhou said China needs to adjust its power generation structure, as well as the operating models and pricing mechanisms within the system.

Coal has long been China’s main power source, with 1.08 terawatts (TW) of installed coal-fired power capacity by the end of 2020. But last year also marked a major milestone as the fossil fuel’s contribution to China’s total power capacity fell to 49.1%, marking the first time below 50% for the source, which not only emits heavy greenhouse gases but is also a major contributor to the country’s heavy air pollution.

Despite that, coal was still responsible for 60.8% of the power that China actually generated last year, reflecting its higher degree of reliability over newer energy sources like wind and solar, which often hinges on things like weather conditions and time of day.

The movement to a “new power system” means coal’s role will likely transition to a complementary source for peak periods from its current role as a main power source at all times. In practical terms, that could see operating time for a typical coal-fired power plant that once ran 5,000 hours a year slashed to 1,000 hours or less. Some less efficient producers could be taken out of service altogether.

Industry participants acknowledge that fairness will be important in the process of such a major transition, especially with regards to changes in power pricing mechanisms, and new mechanisms for compensating producers that have invested heavily in coal power. Fairness must also be ensured as it affects employment, staff redeployment and the disposal of state-owned assets.

As one example, Eastern China’s Shandong province has piloted a compensatory pricing scheme for coal-backed producers whose power is traded in the electricity spot market. That arrangement will see them receive an extra 0.0991 yuan ($0.015) for every kilowatt hour when their power is used as a backup for renewable sources during peak periods.

The winding down of coal power will also entail technological changes, as well as economic and social adjustments. In anticipation of such changes, China needs to start discussing policy and plans for the gradual withdrawal of coal power, said Zhang Shuwei, director of the Draworld Environment Research Center.

Beijing has already set the wheels in motion for the major transformation ahead. In the country’s 13th Five-Year Plan that ran from 2016 to 2020, China put a 1.1 terawatt ceiling on installed coal capacity. The newest five-year plan that runs from 2021 to 2015 calls for “reasonably controlling the scale and pace of development for coal power,” though it has yet to set any clear targets.

The latest five-year plan outline also states that carbon dioxide emissions per unit of GDP will be reduced by 18% over the period — a target that will inevitably affect power generators because they have higher carbon emissions than any other industry.

In 2018, power generation in China produced 4.14 billion tons of carbon dioxide, accounting for 43.4% of national carbon emissions. The country launched a national carbon market quota allocation plan late last year, with power generators the first to participate, even though initial quotas are relatively relaxed and thus will initially have a limited role in emissions reduction.

As coal use wanes, renewable energy will become the main pillar of the power system. Power generation from such sources has grown rapidly in recent years, with China’s cumulative installed capacity for wind and solar power generation now first in the world. As of late last year, the country’s combined installed capacity for the two renewable sources reached 530 gigawatts, accounting for 24% of the nation’s total.

China further committed to bringing its combined installed wind and solar capacities to more than 1.2 terawatts by 2030 at the Climate Ambition Summit in December.

One major challenge will be fluctuating and intermittent supplies due to factors like weather and time of day. Such issues can be seen today in Qinghai and Shandong provinces, where distribution is under strain partly due to a large installation of solar power that leads to abundant supplies at noon but shortages in the evenings.

The intermittency issue will lead to greater need for systems to effectively report prices and adjust supply and demand based on actual conditions. It will also call for more flexibility from grid operators that have traditionally followed a “unified scheduling using tiered management” operating approach that is good for planning, but less effective at dealing with varying situations.