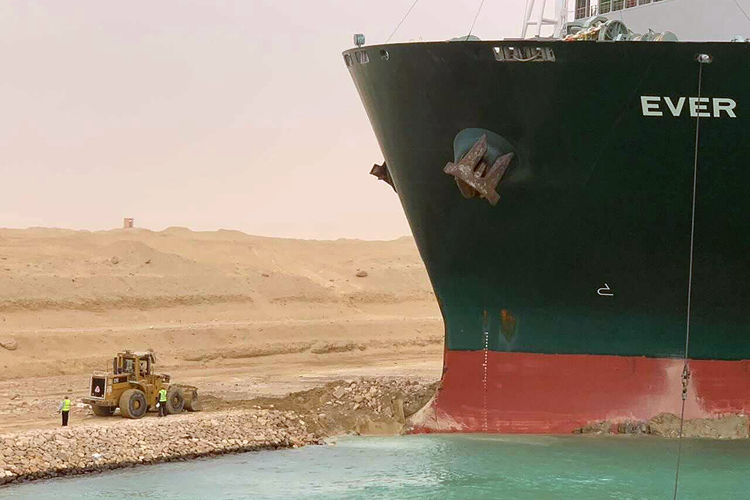 Rescue teams work on floating the container ship which ran aground in the southern part of the Suez Canal on Mar. 23

A huge container ship remains stuck in Egypt's Suez Canal after it ran aground, blocking more than 200 vessels and sparking fears that traffic could be disrupted for days in one of the world’s busiest maritime trade routes.

The Ever Given, with the length of four football pitches, ran aground in the southern part of the canal in Egypt at about 07:40 local time (05:40 GMT) on Tuesday, blocking marine traffic in both directions. As of 11:00 GMT Wednesday, the Suez Canal has been shut down for more than 34 hours as rescue teams work to free the ship.

Eight tug boats are working to free the 59-meter-wide (193.6 feet) vessel, the Suez Canal Authority said in a statement Wednesday. The authority gave no timeframe on when the rest of the ship will be released, and traffic can resume.

Efforts to release the giant vessel have made little progress, according to a staffer at European maritime department of logistic firm Kuehne+Nagel, who is following the incident closely. With more ships blocked, global trade flows, especially those between Asia and Europe, will be hit severely, said the person.

The 193-kilometer-long (120 miles) Suez Canal connects the Mediterranean to the Red Sea and provides the shortest sea link between Asia and Europe. It is one of the most trafficked waterways in the world, which is vital for the transport of everything from oil to consumer goods. About 12% of global trade and 8% of liquefied natural gas pass through the canal, as do around one million barrels of oil each day, according to Bloomberg data.

The Ever Given, operated by Taiwanese transport company Evergreen Marine Corp. and registered in Panama, ran aground amid poor visibility caused by a dust storm and strong winds, according to the canal authority.

The vessel is 400 meters in length and 59 meters in width, with a total tonnage of 224,000 tons, said the authority. The huge size and heavy load of the ship make flotation efforts very difficult, a market expert said.

Built in 2018, the Ever Given has the capacity to transport 20,000 containers. The ship was bound for the port city of Rotterdam in the Netherlands from China and was passing northward through the canal on its way to the Mediterranean.

The incident has disrupted the global maritime cargo market as many ships en route to the Suez Canal have been obliged to reschedule, according to the Kuehne+Nagel source.

Oil prices rose on Wednesday following the incident, with West Texas Intermediate (WTI) climbing 3.4% to reach $60 in the afternoon.