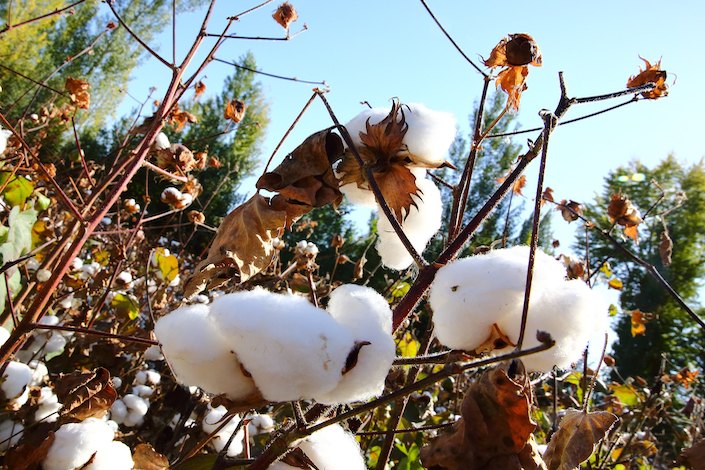 Cotton field in a Xinjiang farm.

China’s commerce ministry said that certain multinational enterprises’ decisions not to source cotton from China’s far west Xinjiang autonomous region were based on “false information,” and the firms should reverse their “erroneous practices” instead of “politicizing commercial issues.”

Gao Feng, a spokesman for the Chinese commerce ministry, told a press conference on Thursday that “Chinese consumers have already responded with practical actions to the so-called business decisions made by individual enterprises based on false information.”

“We hope that the enterprises concerned will respect the laws of the market, correct their erroneous practices and avoid politicizing commercial issues,” Gao said.

He added that the ministry would “welcome foreign enterprises to visit Xinjiang on the ground” and would also provide “active support” for them to carry out trade and investment in the autonomous region.

The spokesman’s comment came as multiple foreign fashion brands, including Sweden’s H&M and the U.S.’ Nike, suffered a backlash after the firms’ previous statements resurfaced this week, which expressed concern over reports of alleged “forced labor” in China’s largest cotton growing area.

The reappearance of the firms’ statements coincided with Monday’s coordinated sanctions by the EU, U.S., Britain, and Canada against Chinese officials for what they viewed as human rights-related abuses in Xinjiang.

In a tit-for-tat response, Beijing imposed sanctions on 10 EU entities, including politicians and four EU institutions. China’s foreign ministry did not say whether it would also sanction the U.S., Britain, and Canada.

Both of the sportswear companies, H&M and Nike, confirmed that they have decided not to source cotton or employ workers from the autonomous region, according to company statements reportedly released last year. As of Friday, H&M’s original statement disappeared from its website (Google cache), while Nike’s was still accessible.

Many Chinese internet users have been advocating boycotts on those foreign fashion brands. H&M products can no longer be searched on China’s major online shopping platforms, including Taobao and Jingdong.

Meanwhile, Japanese clothing retailers such as Muji and Uniqlo have been open about sourcing materials from Xinjiang. However, Muji said in a statement on Thursday that it was “deeply concerned” about labor conditions in Xinjiang, but it found “no significant issues,” according to a Reuters report.

Hua Chunying, a spokeswoman for the Chinese foreign ministry, added during Thursday’s press conference that the allegation of "forced labor" in Xinjiang “is nothing but malicious lies concocted by a few anti-China forces in an attempt to smear China, undermine security and stability in Xinjiang, and frustrate China's development.”

“Xinjiang cotton is one of the best in the world, and it will be the loss of certain company to not use it,” she said.