By Lu Chen and Matthew Walsh 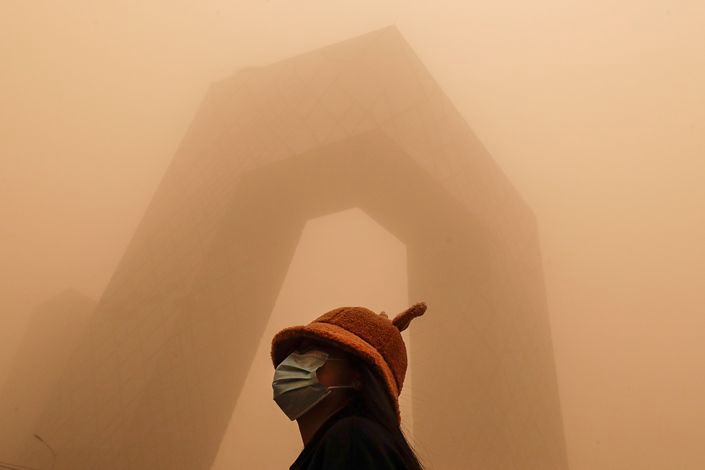 A sandstorm smothers Beijing on March 15 as strong winds sweep in from Inner Mongolia and parts of Northwest China. Photo: IC Photo

People across northern China battled dust-laden winds and orange-tinted skies earlier this month as the biggest sandstorm in nearly a decade engulfed a huge swath of the region.

Such extreme weather has become rare since the government invested in projects to block wind and keep sand on the ground earlier this century.

Official weather data shows the sandstorm originated March 13 in China’s northern neighbor, Mongolia, where it caused at least 10 deaths, left hundreds of people missing and killed more than 1,200 livestock, a major source of income in a largely agricultural nation.

Yet the international media were slow to draw attention to Mongolia’s plight. As other Northeast Asian countries strengthen controls on air pollution and extreme weather events, the rapidly desertifying country of 3.4 million people has fallen by the wayside.

Landlocked between its two giant neighbors, China and Russia, more than three-quarters of Mongolia is currently vulnerable to desertification. Forests cover around 10% of the country, while more than 80% is alpine or desert steppe, or arid grassland, according to United Nations Environment Programme reports.

Sandstorms typically form in spring, when strong winds blow over dry, barren land, loosening sand and dirt. Although they are natural phenomena, the recent storm reflects a sinister trend.

Global climate change appears to be driving the increasing frequency of sandstorms in Mongolia.

Since 1940, the country’s average annual temperature has risen by at least 1.8 degrees Celsius, a trend that is expected to continue in the coming decades.

Higher temperatures mean that already-dry regions will see more evaporation, and that dry weather is likely to last longer.

A report from the North-East Asian Subregional Program for Environmental Cooperation (NEASPEC), an intergovernmental group, says drought and wind erosion are the main factors in Mongolia’s desertification.

“Reduced rainfall is an intractable issue for any region, and there is little that humans can do to remedy the problem,” said Ma Junhe, an environmental campaigner who has worked in desertification control in Northwest China for more than a decade.

But human activity is making Mongolia’s environmental problems even worse.

The reliance of Mongolia’s economy on agriculture and mining exports has pushed its fragile ecosystems to the brink of collapse.

Many studies on desertification in Mongolia focus on overgrazing. Government data shows that 2.6 times as many livestock grazed in the country in 2018 compared with 1990. But these numbers alone explain little — after all, similarly dramatic rises took place in other Asian economies, including China, over the same period.

More important is the fact that more farm animals now live in Mongolia than the country’s pastures can feed. According to data published in January by the United Nations Development Program (UNDP), Mongolia has 33 million more head of livestock than can survive adequately on natural pasturelands.

Pasture degradation, in turn, has negative impacts on incomes and broader society. A 2020 study found that desertification had contributed to population losses in almost all surveyed villages as herders abandon their livelihoods and seek work in the cities.

The twin threat of overgrazing and excessive mining stems from Mongolia’s market-oriented reforms implemented after the collapse of the Soviet Union, once its major trading partner.

In recent years, rising living and production costs have triggered ever more intense efforts to generate wealth from the natural environment. As a traditionally nomadic, agricultural nation, Mongolia also needs to exert comparatively larger pressure on nature to enrich its people.

Take goat herding, for instance. Rises in the price of cashmere, a goat-derived wool, prompted herders to raise more animals, which increased from 20% to 40% of the national livestock herd between 1990 and 2018. But the tendency of goats to tear up grass by the roots during feeding accelerated pasture degradation and desertification.

Efforts to curb desertification have been ongoing in Mongolia for around 30 years. In 1997, the country’s environment ministry issued a national plan to combat desertification and later formulated conservation laws, set up weather monitoring systems and established green belts.

However, the measures taken so far have not produced satisfactory results. An economic survey suggests Mongolia’s livestock and mining sectors are set to grow further in the coming years, a development that will ramp up the pressure on ecosystems.

Judging from the experiences of other countries, this is not good news for Mongolia’s fragile environment. It also makes little economic sense in the long run, as ecological destruction limits future industrial development and hits incomes.

A UNDP pilot program in Mongolia provides annual subsidies to help herding families reduce livestock numbers by 5% while maintaining current incomes. So far, the trial has had some initial success.

But more sweeping efforts to control desertification eventually clash with the need to raise incomes. Half of Mongolia’s farmers and herders live below the poverty line, and existing support measures are unlikely to make them put the environment above their quality of life.