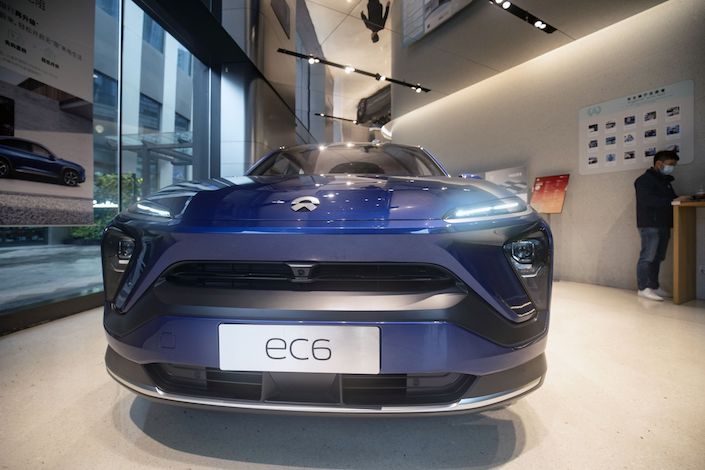 (Bloomberg) — Nio Inc. will temporarily halt production at one of its factories in Anhui province because of a semiconductor shortage, becoming the first high-profile Chinese carmaker to succumb to the chip-supply problems that have temporarily silenced the factory lines of auto manufacturers globally.

Nio’s JAC-NIO plant in the central provincial capital of Hefei will cease operations for five working days starting from March 29, the company said in a statement Friday.

“The overall supply constraint of semiconductors has impacted the company’s production volume in March,” Shanghai-based Nio said. “The company expects to deliver approximately 19,500 vehicles in the first quarter, adjusted from previously released outlook of 20,000 to 20,500 vehicles.”

Shares of the U.S. listed electric-car maker fell 7% to $35.24 in premarket trading in New York.

Automakers the world over have extended production cuts that first began in late December to cope with a worsening global shortage of semiconductors. The coronavirus pandemic caused a surge in chip orders that are needed for smartphones, TVs and computers as people try to make extended life at home more bearable, leaving less capacity for a stronger-than-expected rebound in vehicle demand.

Recent weather-related disruptions of petrochemical supplies in the southern U.S. and a fire at a chipmaking plant in Japan have exacerbated the shutdowns.

Nio’s shares climbed more than 1,100% in 2020, pulled higher by excitement around the prospects for growth in China’s EV market, the world’s biggest.

The investor enthusiasm for electric cars comes as Nio, along with Chinese rivals Xpeng Inc. and Li Auto Inc. consider second listings in Hong Kong, according to people familiar with the matter.

As of January, Nio had delivered 82,866 electric cars in China since its first model came to market in June 2018. Its high-end sport-utility vehicles have proven a hit with wealthy consumers, helping to push Nio’s gross margin to 17.2% in the fourth quarter.

But the company posted a wider-than-expected loss in the quarter, a year after a government cash injection saved the company from bankruptcy.

Chief Executive Officer William Li said at the release of Nio’s latest results earlier this month that production capacity may be constrained by the global chip shortage.

While monthly capacity has risen to 10,000 units, production will remain at 7,500 “due to supply-chain limits, including the chip shortage,” he said on March 2. “Though we believe we are able to meet expected demand for the second quarter, there’s indeed a higher risk.”