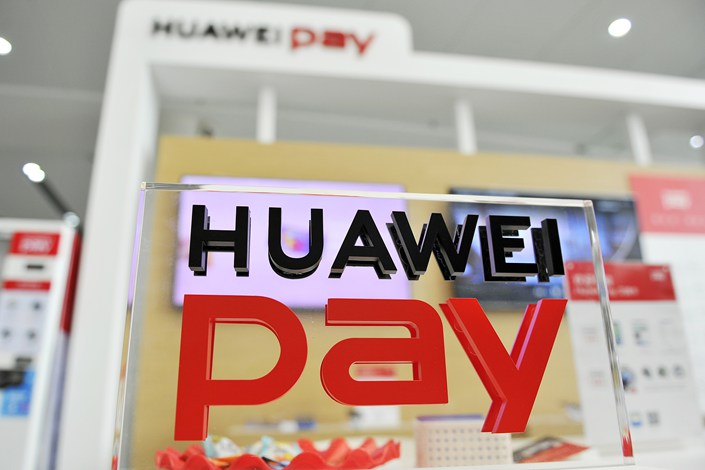 Huawei Technologies Co. Ltd. has obtained a coveted Chinese nonbanking payment license, giving the embattled tech giant a foothold in a fintech sector dominated by Tencent and Ant Group as those firms grapple with regulators.

Huawei obtained the permit by acquiring an existing license holder, a common maneuver, by purchasing Shenzhen payments firm Xunlian Zhipay on Thursday from Shanghai Woruiou Information Technology Co. Ltd. A Huawei spokesperson on Monday confirmed the deal but did not disclose its terms.

Exactly how Huawei intends to use the license is unclear. “Huawei made this acquisition with the goal of offering a wider range of secure, easy-to-use smart services to enrich people's digital lives in all possible scenarios,” a spokesperson for the firm told Caixin.

The payment license frees Huawei to offer more flexible services than its 5-year-old hardware-based system that turns its smartphones into bank cards for both domestic and international users.

Huawei remains the largest smartphone vendor in China, but has seen its market share slip over the second half of 2020 to around 30% in the face of mounting domestic competition during the fourth quarter, according to data from research firm Counterpoint.

“Nonbank payment institutions,” commonly known as third-party payment platforms, are the backbone of everyday Chinese commerce with Alipay and WeChat Pay the dominant players, with each boasting around 1 billion monthly active users.

The two leaders facilitated about 55% and 38%, respectively, of the roughly 240 trillion yuan worth of third-party payments made on mobile platforms last year. But mounting tough talk by Chinese regulators about anticompetitive behavior and the resulting pressure it has put on the two giants of the industry has seen a proliferation of new entrants — mostly other large tech firms.

In August, a company controlled by ByteDance Ltd. founder Zhang Yiming gained one such license after taking over online payment company Wuhan Hezhong Epro Technology Co. Ltd. The license was used to launch Douyin Pay, setting the stage for the short-video powerhouse to square off against Alibaba Group Holding Ltd. and Tencent Holdings Ltd. in the massive e-commerce market.

China’s central bank started licensing third-party payment providers, who process payments mostly from online shopping for goods and services, in May 2011, and although Alipay and WeChat Pay are the dominant players, historical data shows more than 230 companies have been granted a license.

That was because the first payment license held by JD Digits, which the parent acquired in 2012 by purchasing China Payments Technology Co. Ltd., confined its use within the borders of the Beijing region. JD Digits’ strategy was to provide services for brick-and-mortar stores and small businesses, company sources told Caixin at the time, rather than compete head on with Alipay and WeChat in mobile payments.

Xunlian Zhipay was established in 2013 by a unit of Huawei’s hometown competitor ZTE Corp., which sold it to Shanghai Woruiou in 2016. The firm’s chairman, Wang Guanrong, was formerly the deputy director of the People’s Bank of China’s payment and settlement department.

In September, international travel agency Trip.com picked up a license by buying a Shanghai-based company named Dongfang Huirong, which has held the license since 2011. After awarding several dozen such licenses as part of a financial reform program, the central bank stopped making new authorizations available in 2016. That has made such license holders attractive targets.