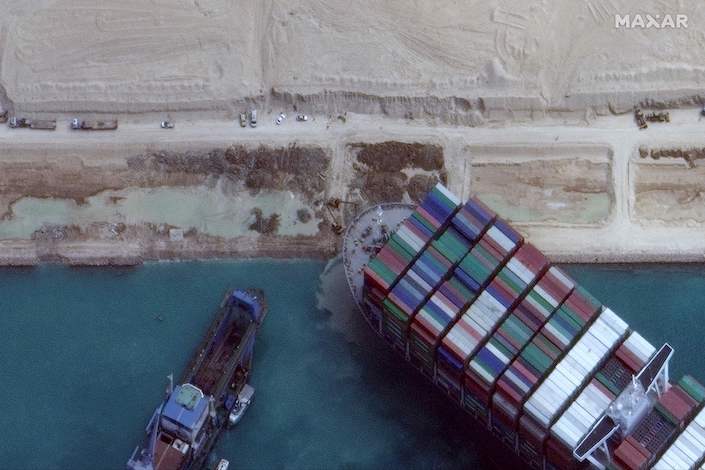 The giant container ship stranded in the Suez Canal for nearly a week was finally pulled free, allowing traffic through the vital maritime trade route to resume.

The 400-meter long Ever Given is fully afloat, the Suez Canal Authority said Monday. Marine traffic websites showed images of the ship free of the banks of the Suez Canal for the first time since it ran aground Tuesday.

The container ship was moved from the canal wall around 3 p.m. Egypt time Monday. The vessel was towed toward the Great Bitter Lake, where it anchored for inspections and an investigation, according to a local newspaper.

More than 10 tugboats were deployed in the rescue effort in the early hours Monday after salvage teams spent days dredging to loosen the grounded vessel. The huge size and heavy load of the ship made flotation efforts very difficult, a market expert said.

The Ever Given, operated by Taiwanese transport company Evergreen Marine Corp. and registered in Panama, ran aground in the southern part of the canal Tuesday, blocking marine traffic in both directions and snarling global supply lines that were already under pressure from the coronavirus pandemic.

As of Monday morning, more than 400 vessels were either stalled waiting or headed to the waterway, which is a conduit for about 12% of world trade. Some ships diverted to the longer route around the southern tip of Africa after the incident.

Ships were starting to move in the Suez Canal Monday afternoon after Ever Given reached the Great Bitter Lake, ship-tracking data showed.

Clearing the queue of vessels may take as long as two and a half days, with canal operations returning to normal within four days, Suez Canal Authority Chairman Osama Rabie said at a Monday evening press conference.

The blockage held up about $400 million of goods an hour, based on rough calculations from container shipping company Hapag-Lloyd AG’s List that suggested westbound traffic to Europe is worth around $5.1 billion a day and eastbound traffic about $4.5 billion.

Crude prices and international shipping rates jumped over concerns about disrupted schedules and reduced shipping capacity. The price to ship a 40-foot container from China to Europe almost quadrupled from a year ago, adding a new burden to global supply chains already reeling from a pandemic that has caused shortages and delays.

Shipping experts predicted that the disruption will last months because of overturned schedules and the uneven wave of cargo that will hit ports down the line.