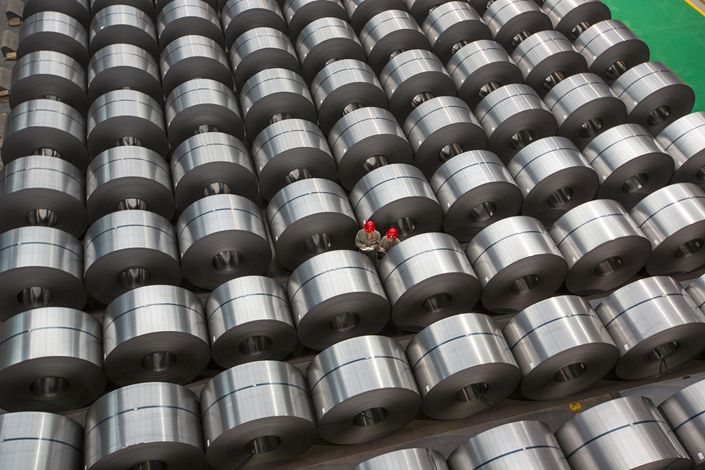 The Caixin China General Manufacturing Purchasing Managers’ Index (PMI), which gives an independent snapshot of the country’s manufacturing sector, dropped to 50.6 in March from 50.9 the previous month, according to a report released Thursday.

A number above 50 indicates an expansion in activity, while a reading below that signals a contraction. The March reading showed manufacturing activity has expanded for 11 months in a row; however, the pace slowed for a fourth consecutive month. This indicates the post-epidemic recovery continued to falter, said Wang Zhe, a senior economist at Caixin Insight Group.

The breakdown of the PMI showed that both supply and demand in the manufacturing sector grew at a slower pace, as the subindexes for output and total new orders edged down for a fourth straight month.

Softening domestic demand was partially offset by demand from overseas, which began growing again in March, with new export orders increasing for the first time this year, according to the survey carried out between March 12 and March 23. This comes as global economic conditions continued to recover from the Covid-19 pandemic, the survey showed.

The slower growth in both supply and demand added to pressure on the labor market, according to Wang. The employment subindex in March shrank for a fourth consecutive month, though not as much as in the previous month. “Employment remained low because manufacturers weren’t very motivated to replace departing workers,” Wang said.

Manufacturers in China reported sharp increases in both input costs and output prices in March, which indicated growing inflationary pressure, according to the survey. The gauge for input costs in March hit the highest level since November 2017, as prices of raw materials, including industrial metals and crude oil, rose further.

As a result, firms raised their sales prices to the highest since November 2016. Surveyed firms said that rising prices also suppressed any further recovery of demand.

“The growing inflationary pressure limits the room for future policies and is not a good thing for sustaining an economic recovery in the post-epidemic period,” Wang said.

The slowdown in the economic recovery further weakened manufacturers’ motivation to replenish their stocks, Wang said. Stocks of purchased items shrank for the third consecutive month, and quantity of purchases plunged for the first time in 11 months.

However, manufacturing companies maintained a positive outlook for their businesses over the next year, with the gauge for future output expectations rising to the third-highest since August 2014. Such confidence in rising output was “heavily linked to expectations that the pandemic will end, and that global demand will recover,” the survey said.

China’s official manufacturing PMI, released by the National Bureau of Statistics on Wednesday, rebounded to 51.9 (link in Chinese) in March from 50.6 the previous month. The official PMI polls a larger proportion of big companies and state-owned enterprises than the Caixin PMI, which is compiled by London-based data analytics firm IHS Markit Ltd.