Zhang Weiying: What China Needs to Do to Become a Real Manufacturing Power 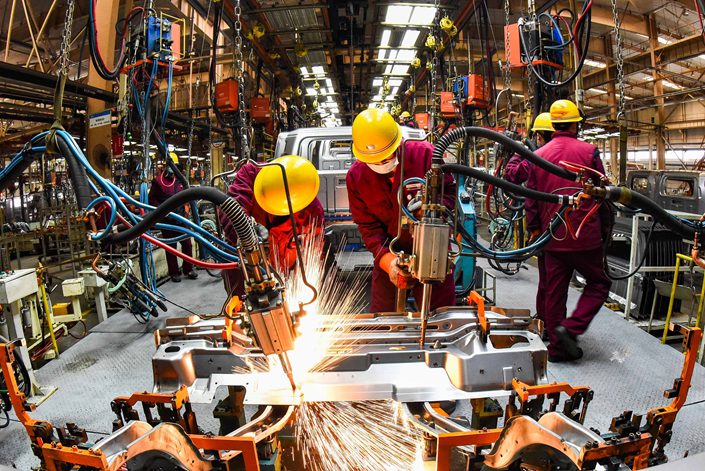 Is China a manufacturing giant?

For sure it is already a major global manufacturer, having overtaken the U.S.’s leading position back in 2010.

But we mustn’t forget that 200 years ago, China was not only the world’s largest manufacturer; its lead over other countries was positively vast. In 1750, China’s manufacturing capacity accounted for one-third of the global total, while the U.K. accounted for less than 5% of that, at 1.6% of the global total. Even in 1830, when China contributed 29.7%, the U.K.’s output was still less than one-third of China’s. America’s relative manufacturing capacity in 1973 was the same as China’s in 1800 (33%), when China only contributed 3.9%, basically equivalent to the U.K.’s output (4.1%) in 1800.

Thus one might say that China, which was a true manufacturing giant long ago, is now returning to its former glory.

But whether it’s today or two centuries ago, it would be inaccurate to call China a true “manufacturing powerhouse.”

From arbitrage to innovation

To make a long story short, against the backdrop of globalization and China’s reform and opening-up, entrepreneurs both in China and around the world took advantage of developed Western countries’ past three centuries of technology and management experience to engage in arbitrage and build China into a major manufacturer.

Despite its rise, China’s manufacturing capabilities remain limited to products of the Second Industrial Revolution, while it merely does assembly work for most products of the Third Industrial Revolution. Foreign-funded enterprises have played a crucial role in the revitalization of China’s manufacturing industry. Today, over 40% of China’s exports are made by foreign-funded enterprises.

So, how can China become a manufacturing power?

Traditional manufacturing powers like the U.K., the U.S., Germany and Japan relied on a large force of innovative entrepreneurs to create novel products, raw materials, modes of production, industries, organizational forms and management methods. Without the many famous entrepreneurs in these countries’ histories, they never would have been able to develop into manufacturing powerhouses. Some notable examples include John Wilkinson and Matthew Boulton of the U.K., Andrew Carnegie, Isaac Singer, Thomas Edison, John Rockefeller and Bill Gates of the U.S., and Kiichiro Toyoda, Soichiro Honda and Akio Morita of Japan. These entrepreneurs were so innovative that one can say some of them created new industries. But so far, Chinese entrepreneurs have failed to create any real new industries.

While innovation relies to some extent on individual entrepreneurs’ efforts, what’s more important is the institutional and policy environment. Compared to arbitrage, innovation places much higher requirements on the system because it involves greater uncertainty and longer cycles. Successful innovation demands that entrepreneurs are patient and far-sighted.

Generally speaking, China’s system is still based on arbitrage rather than innovation. Prerequisites for an innovative system are a free competitive market, the free development of private enterprises and the free movement of the population — which in turn depend on the rule of law, particularly the effective protection of private property and individual rights.

Despite their serious flaws, these metrics nevertheless provide certain points of reference. Using these indicators, we can see that China has made great progress over the past decade or so.

But these indicators vary greatly region to region. In 2016, for example, the R&D intensity of industrial enterprises above a designated size ranged from 0.233% to 1.43%, while the sales ratio of new products ranged from 1.7% to 32.7%.

How did such gaps come about?

Over the past three to four decades, China has made huge breakthroughs in economic marketization, and at the same time, generated huge regional disparities.

The ability to innovate is further influenced by levels of import and export trade, utilization of overseas capital, urbanization and city size. Finally, population flow is also an important factor.

In terms of total patents, the top 10 most innovative cities in China are Beijing, Shenzhen, Shanghai, Guangzhou, Suzhou, Dongguan, Hangzhou, Tianjin, Chengdu and Ningbo. Among these 10, three are located in Guangdong province and two in Zhejiang province.

Why are these places so creative? It has a lot to do with the aforementioned factors such as degree of marketization, but here I’d like to stress the importance of the role played by the migrant population.

Read more
China to Further Relax Residency Restrictions, but Not in the Biggest Cities

On average, the long-term resident population in these 10 cities is 1.63 times larger than the registered population. The disparity is largest in Dongguan (4.27 times), followed by Shenzhen (3.31 times).

Around the world, it is immigrant-rich countries and regions that enjoy the most outstanding performances in innovation, such as the U.S., Switzerland and Israel. As a striking example, the Swiss timepiece industry was originally developed by French refugees. Then it was Swiss businessman of Lebanese descent Nicolas Hayek who made the greatest contribution to the revitalization of the Swiss watch industry in the 1980s.

Immigrants are less restrained by tradition, bound neither to the rules of the regions from which they come nor those of the regions to which they move. Relatively unburdened, free of body and mind, they dare to innovate and take risks. Diversity is the greatest cultural basis for innovation because when people from different cultures come together and communicate with one another, it sparks new ways of thinking. This suggests China should permit the free flow of its national populace and accept more international immigrants as well. Shenzhen may be a migrant city, but it is still far from an international metropolis. Shenzhen cannot hope to compare to New York or London, but it should be able to improve on innovation if just 10% or even 5% of its international residents worked there long-term.

Just as regional competition is a competition between systems, so is interstate competition. Chinese and international entrepreneurs have made good use of arbitrage, helping China regain its position as a manufacturing giant. But only innovative entrepreneurs can help China realize its dream of becoming a manufacturing power. To this end, China needs to strengthen market-based reform and the rule of law nationwide.

Zhang Weiying is a professor at the National School of Development at Peking University.

This article is based on the author’s keynote speech at the fifth China’s Manufacturing Power Forum on Dec. 28, 2019.